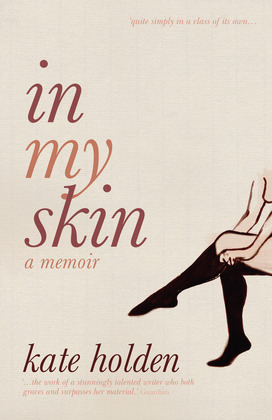 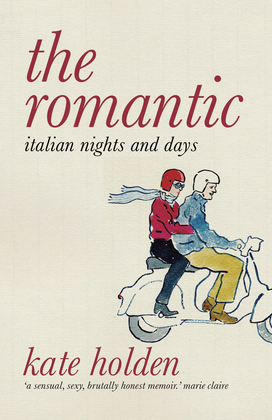 Reading Kate Holden’s In My Skin and The Romantic together is a little unsettling. It almost feels as though a third part in a trilogy is missing: the story where the protagonist finds peace. The character arc from one book to another is quite powerful, taking Holden through a series of major changes: some terrifying and some quite wonderful. Both books are confronting in different ways. In My Skin charts Holden’s experiences of heroin addiction and working in the sex industry. It’s visceral and almost unbearably honest, refusing to sugar-coat the pain or the abuse that is dealt out to her. There are no soft lenses here. Holden describes many of her experiences, from the ritual of shooting up in an alley way, to the intricacies of oral sex on an abusive customer, in graphic detail. Despite the clarity of description, the book never becomes ugly, and the sex and violence is never gratuitous. Instead, Holden writes with a strong sense of  dignity and humanism that not only bolsters the darkness and pain of these experiences but sheds a compassionate light on all people who make use of the sex industry, both as sex workers or users:

There were times, as I caressed a simple man’s temple, or bent to kiss a voluptuously beautiful body, that I got tears in my eyes. It was as if I were discovering how to fall in love with anyone, for the duration of a booking. It seemed that anyone could be beautiful if I looked for it. The whore with the heart of gold, I thought mockingly but my wryness did not take away the grace. (240)

The writing is consistently rich and self-reflective, without ever sliding into pretension, even when Holden is talking philosophy with her clients. The situation often gets very bad, as Holden ends up working seven days a week and often puts her life in danger, experiences abuse and humiliation solely for the sake of the next fix, but at no point does the writing slide into self-pity. Always there is a sense of curiosity and attempts at integration between the studious liberal arts student who always handed in homework early, and the street walker who sleeps in a hovel and eats little more than the odd chocolate bar on her way to score. Holden always manages a calm, almost soothing persona and the kind of thoughtfulness that has her supporting her fellow sex workers from management abuse, or exploring the reasons for her addiction:

Heroin is compelling, in the end, because it is satisfaction you can hold in your hand. Fulfilment, contentment, pride—these are feelings that a person can derive from being a good person, an able parent, a successful worker, an inspired artist. They are inchoate, invisible, ineffable feelings, for all their wonder. They are abstract. Heroin is a satisfaction you can pursue, it’s concrete; you must get the money, find the dealer, arrange the equipment. Then you take the little grain of promise, and you dissolve it, and you draw it up into a needle; you hold it in your hand , and you push it into your flesh. (42)

The descriptions of St Kilda and Melbourne provide a powerful backdrop. Though it would be easy to get caught up in the grittiness of Holden’s story, the pain her parents endured, or the ease at which Holden falls into addiction, at the end of the day, In My Skin is an affirmative and uplifting tale that is as poetically rich as it is informative:

When I go to St Kilda for a coffee, the place is a palimpsest of memories. Time and space collapse; the place is full of ghosts of me. (281)

In The Romantic, it’s possible to forget that this is the same protagonist as the person we read about in In the Skin. Heroin suppresses the pain receptors, so Holden’s acute sensitivity as she attempts to make a life for herself in a new country is uncomfortable, and her path is often steeper and more subtle than it might seem at first glance. The story takes place throughout the space of a year in Italy, not long after the events in In the Skin finish, and is set primarily in Rome and Naples. Throughout the book, Holden explores Italy with the curiosity of a tourist on a pilgrimage. Though she has come to find herself and shake off the sordidness of the past, Holden’s first impressions of Rome are daunting:

The city is screaming. It hits her as she stumbles off the train with her bag; in the echoing cavern of the station of the tannoy is going mad with announcements an there seems to be a thousand people milling on the platform. She takes one look at the station cafe, hoping to get a coffee; it’s a melee. She heads out into the grainy sunlight. (33)

The ongoing struggle between Holden’s desire for personal autonomy and freedom and the oppression of her past relationships with men becomes the trajectory through which the story flows. There’s more deliberate distancing in The Romantic, as Holden moves away from the first person intensity of In My Skin, and uses a third-person narrative. Going back to the life she’s fled is not an option, as one small transgression makes very clear, but going forward is hard, and will rely on painful transformation:

Eager to please, easy to please. But she has been fighting, these path months in Italy, to be Kate again. To be herself. Pursuing honesty. Determing her own way. Trying to be true to the Romantic ideals of purity, of authentic feeling, of renegade self-will.

Woven like a thread through the story is the romantic poetry of Byron, Keats and Shelly, which  helps animate the ideas behind Holden’s pilgrimage: “Go thou to Rome…” Though one of Holden’s earlier partners – a condescending Englishman named Jack, admonishes her for her childishness; for skulking about in the dark reading poetry; for wearing silver rings like an adolescent, Holden’s love of the Romantics sustains and nourishes her through the many losses she has to endure through the book. Language always underlies the action: Holden’s ongoing attempts to communicate in another language; in another culture; and across misunderstandings and perceptions.  Poetry is one form of language, and intimacy is another. In many ways it could be said that this is a book about how we can, and cannot, connect with one another.

The book ends with Kate passing through a shaft of hot light, and it feels almost like a kind of rebirth into a sense of self-awareness and self-containment that is intrinsically tied to her love of language, of words, and of human connection. This is human nature at its most raw and fragile and there is almost a dramatic irony in the reader’s knowledge that the story will continue to develop beyond the pages into the self-aware and settled life of the “Kate” that animates part seven of the book. Life is always a work in progress, and no memoir finishes when you close the pages. Nevertheless, both In the Skin and The Romantic make for very intense and engrossing reads that will leave the reader questioning notions of safety, romanticism in all its forms, and how we make our lives meaningful.