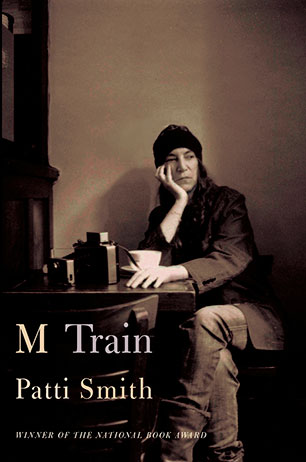 Smith would have us believe that M Train is a book about nothing. She opens it with a phrase from a dream that haunts her: “It’s not so easy writing about nothing.” Those of us who recognise her intense grief, and the determination to capture these experiences in poetic prose, will disagree with her that this is a book about nothing. Perhaps it’s a book where “nothing” happens: nothing becomes something. The book presents nineteen essays that stand alone, but also interlink, vacillating organically through time and space. Smith encourages the reader to participate in this creative collaboration, which takes place in snippets of dreams, in remembered adventures with her husband Fred “Sonic” Smith, who died suddenly of a heart attack, in various cafes, and in snatches of ideas written on napkins and envelopes. Smith makes friends with real people: Zac the coffee maker who buys his own café in Rockaway Beach, the secretary of the Alfred Wegener society that Smith belongs to, her friend Klaus, the Director at the Frida Kahlo museum Casa Azul, who helps her into Frida’s bed when she’s sick, but the living seem to be shadowy, passing presences, less real than the ghosts she carries with her: her husband, her brother, her mother, Jean Genet, William Blake, William Burroughs, Friedrich Schiller, Sylvia Plath, Nikola Tesla, and Frida Kahlo to name a few.  There are also the artefacts that she brings with her – books such as Haruki Murakami’s The Wind-Up Bird Chronicle or Burroughs’ black coat both become icons that she loses – allowing them to pass into memory and therefore become more real; more permanent.

At the heart of the present tense is Smith’s home in NYC, where she continues to return, tracing a walking route between her apartment to the local Café ‘Ino on Bedford Street where she maintains a corner table and chair (I don’t think it’s a spoiler to say that this chair eventually goes home with her), her cats, her books, and her unfinished writing. Then there is Rockaway Beach, another Ithaca where Smith purchases a house so run-down that it isn’t livable, though somehow, it survives Hurricane Sandy.

Throughout the book are hazy, evocative, black and white Polaroid snaps. These serve as reminders that we’re in the realm of dreams and memories—the images are black and white, and hint at meaning rather than demonstrate fact. Time is almost always cyclical, with memories opening doors to sequences from the past. In a Proustian way, a cup of coffee might lead into a feverish childhood.  A page from a novel in the present might conjure a long ago pilgrimage to carry stones from St-Laurent prison to Jean Genet’s grave:

I closed my notebook and sat in the café thinking about real time. Is it time uninterrupted? Only the presented comprehended? Are our thoughts nothing but passing trains, no stops, devoid of dimension, whizzing by massive posters with repeating images? Catching a fragment from a window seat, yet another fragment from the next identical frame. If I write in the present yet digress, is that still real time? Real time, I reasoned, cannot be divided into sections like numbers on the face of a clock. If I write about the past as I simultaneously dwell in the present, am I still in real time? Perhaps there is no past or future, only the perpetual present that contains this trinity of memory. (84-85)

One gets the definite sense in M Train that most of these essays are about doomed romantic quests. The quests are doomed because of the impossibility of bringing back all those things which we lose and keep losing: loved ones, coats, books, homes and dreams. Of course the quest is all that matters – this tilting at windmills provides the overarching theme of the book: “Shard by shard we are released from the so-called tyranny of time.”

It’s perfectly possible to call M Train a travelogue.  The essays move freely across time and space, or it could be a book about the pleasures of black coffee (and I admit to having upped my own daily caffeine intake while reading – so much does coffee figure in this book). Ultimately though, M Train is a beautifully written, poetic, intensely personal and moving ode to love, loss and the intricacies of the human heart.