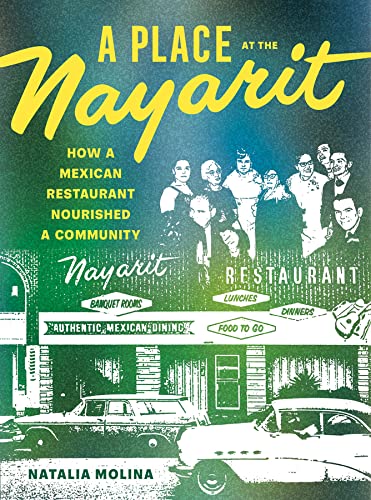 My family has many cherished recipes that no one knows how to make, save the descendant chosen by a grandmother or great aunt to learn the secrets that make the dish right. In many ways, the oral histories of these recipes have made the taste of whatever is being cooked or baked more delicious. There is struggle there, textures that tell a story. And the stories are what keep us coming back for more. A Place at the Nayarit tells the stories woven through the author’s own familial recipes and, in the process, documents the spectacular tale of a restaurant that was so much more than that. Opened in 1951 by the grandmother of the author, Dr. Natalia Molina, a distinguished professor at the University of Southern California, The Nayarit was an Echo Park institution throughout the back half of the twentieth century.

A talented oral historian, Molina describes how her grandmother, Doña Natalia Barraza, found a place in Echo Park, a diverse neighborhood located on the eastside of Los Angeles, to open her restaurant, The Nayarit. The Nayarit, of course, is also one of the states comprising the federated nation of Mexico and the regional cuisine local to the Nayarit was the driving force of the restaurant’s menu and eventual draw. With an authentic menu and Náayerite staff, the Nayarit was a special place and a focal point of the Echo Park community.

Molina describes this draw by exploring, through careful archival work and incredibly detailed interviewing, how the Nayarit came to define the community around it and support that self same community. As Molina describes, her grandmother, a citizen of an ‘enclave of the dispossessed’ (Echo Park), worked to establish her restaurant, and herself as a person, as the epicenter of a community: the sort of place that you go after a Dodgers game, before a wedding, on your birthday, or when you’re in need of help and searching for someone you can trust. A Place at the Nayarit is also a detailed documentation of what happens when we lose these centers of community (The Nayarit and the Nayarit II are both closed).

A talented restaurateur, friend, and mother, Natalia Barraza (Doña Natalia) was also an organizer. But, as Molina so deftly describes, there is a difference between Organizing with a capital O (commonly associated with groups like the United Farm Workers of America or the Movimiento Estudiantil Chicano de Aztlán) and lowercase organizing (community building and mutual aid). While the uppercase organizing is most frequently lauded and remembered in the history books, the lowercase organizing, like that documented in Maylei Blackwell’s foundational text ¡Chicana Power! and Gloria Anzaldúa’s Borderlands: La Nueva Fronteriza, often performed by women and racial and sexual minorities, is just as powerful. A Place at the Nayarit is further evidence of that and Molina brilliantly (she is a MacArthur genius, after all) draws on the power of oral histories, which document the less dominant narratives most frequently left out of written accounts, to remember her grandmother and the incredible mark she left on Los Angeles and the people she knew and loved.

A Place at the Nayarit follows a somewhat traditional academic structure in that the chapters are presented chronologically and organized around a specific topic or theme. Those themes include placemaking, connecting to the homeland, immigration and the impact it has on migrants, post-migration growth and change and how that change can make ties to one’s homeland difficult, and the potentiality of losing places. There is also the throughline describing how the Nayarit was simultaneously a place of Mexican expression and community as well as queer expression and community building. In the same way that the Nayarit was a safe place for migrants and the racially dispossessed, it was safe – and hospitable – for members of the queer community.

At its core, A Place at the Nayarit is a book that centers personhood. Natalia Barraza was an incredible woman who leveraged her earned power and cultural capital as a business owner and social boundary crosser to make the lives of others easier, fuller, and brighter. The Nayarit was a place where people lived. Molina recounts, in detail, the dozens if not hundreds of people her grandmother shepherded through the immigration system, set up with jobs, and connected to the community she had a major hand in building. As a result, the book is an incredible collection of anecdotes filled with colorful characters recognizable to those interested in the history of Los Angeles, my favorite of which is that the author’s mother, at the behest of her own mother, attended bartending school with James Earl Ray, who later assassinated Martin Luther King Jr. Like the rich mole she describes her grandmother making with timesaving measures (canned adobos are fine), Molina’s fluid writing and attention to detail transform a comparatively compact academic history into a text to be savored both quickly and returned to frequently.

The Nayarit is, unfortunately, closed, but A Place at the Nayarit offers readers a taste of what made it a success for several decades. The book also reminds us what happens when authenticity is lost and replaced with replicas that, through the comfort and familiarity they afford the white masses along Santa Monica Boulevard, long outlive the real thing. And that critical evaluation of and reflection on history is a part of its recipe for success.

About the reviewer: Dr Nicholas Havey is a Senior Manager at First Book, a nonprofit social enterprise focused on improving educational equity, a thriller and mystery writer, and a lover of all, but particularly queer, fiction. Nicholas’ other reviews of fiction are featured in Lambda Literary, forthcoming in the Washington Independent Review of Books, and his reviews of academic work appear in a number of peer-reviewed journals.