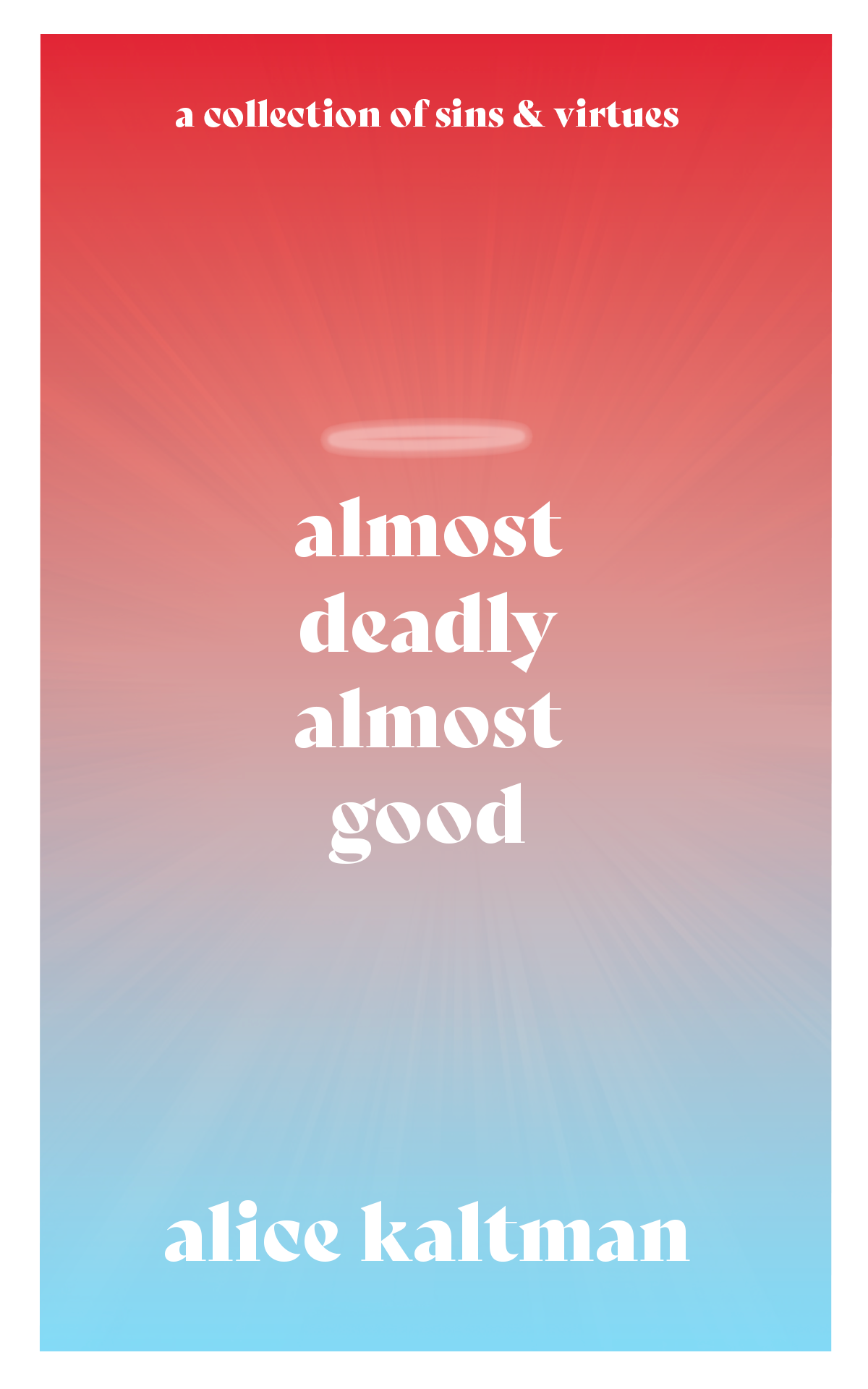 It is pretty much impossible for any stones to be thrown due to how inherently sinful people are. While everyone is capable of moralizing or judging others, there is always some way we fall into sin. On the inverse, it is just as easy to fall into virtuousness without realizing or by doing small actions that ripple out. It’s more about how we accept a balance of sin and virtue that we’re able to figure out our place in the world.

In her short story collection Almost Deadly, Almost Good, Alice Kaltman presents fourteen stories that each represent one of the seven deadly sins and one of the seven heavenly virtues. The stories are all interconnected, with minor characters from one story becoming the protagonist of another and vice versa. Through her incredible plotting and complex understanding of sin and virtues, Kaltman’s collection is one that weaves a fascinating tapestry of what it means to be human and how easily we can be sinful or virtuous.

Despite being structured around Christian ideology, the collection takes a secular view of sin and virtue in order to dive into what it means to commit a sin or practice a virtue. The stories in Almost Deadly, Almost Good could easily fall into melodrama for how Kaltman chooses to present these snapshots of life, but her engrossing prose and relatable characters make it easy to fall into the tales presented. The characters and their choices are born from human failures of character or moments where they show their strength of character. Doing so allows the interconnected nature of these stories to reveal the complexity of the nature of humanity and of Kaltman’s writing.

This reviewer found it necessary to create a character relationship map while reading Almost Deadly, Almost Good, and recommends it for those reading. While some readers may be able to remember the names of characters as they come up and reappear in later stories, drawing a map helps to better understand how these relationships transcend time and space. A story set in New York City in the 1980s can be informed by another set in Oklahoma two decades earlier, or a character’s lousy cosplay gig in one story can be a detail that is noted in a convention attendee’s time there in another. But doing this also reveals the parallels between some of the stories.

For example, the stories that represent the paralleled traits of Pride and Humility demonstrate characters who are attempting to find some joy or motive to better their lives, with a piece of jewelry centering their tales. In the Pride story “Flex,” a tech worker’s attempt to get in shape and impress a woman he’s interested in uses a tennis bracelet to show his growing confidence and willingness to invest in others. In Humility’s story “The Vessel,” a middle-aged woman in a dull period of her life takes comfort in a secret pair of earrings she buys and how they give her confidence in how her possession and wearing of these earrings give her some added power in her life.

Other stories are used to show the dimensions of each person. A character appears in the Lust story “Sunset Lounge” as a handsome, romantic ideal man, but is mentioned in the Gluttony story “A Fancy Job” to have committed a terrible act for which he has suffered no consequences for. Likewise, a TV actor, who appears in multiple stories either in person or addressed through the character he plays on a crime drama, is used to show how others perceive the character he plays or the character he is in real life, with a sin story showing a negative side of him and a virtue story presenting some redeeming elements of his personality.

One of the other elements that shows the strength of Kaltman’s story is how the sin or virtue represented in each story isn’t necessarily a positive or negative trait despite the associations with the sin or virtue. For example, in “A Fancy Job,” the character embodying gluttony is demonstrating a different kind of hunger for justice and peace, and while she demonstrates negative traits like being judgmental of clients at her job, is still a wholly sympathetic character throughout. Likewise, in the Charity story “Knickers in a Twist,” many of the characters are forced into a charitable act of performing a dance show at a juvenile detention center, but the act of charity captures a moment of art and beauty that the narrator of the story looks fondly back on in hindsight. Kaltman is more interested in using sin and virtue to show dimension than to pass judgement, and the stories ask the reader to see how much they can relate to a sinful or virtuous person or what could prevent them from connecting with the characters in the story.

Almost Deadly, Almost Good is a complex web of sins and virtues that presents a wider, more multidimensional world. The stories are fantastic melodrama and human emotion and demonstrate the nature of humanity in more than black and white terms. Kaltman’s prose speaks to how easily it is to be our best and worst selves and how that can influence the world around us, but how that can make us more beautifully gray people.

About the reviewer: Alex Carrigan (he/him) is an editor, poet, and critic from Virginia. His debut poetry chapbook, May All Our Pain Be Champagne: A Collection of Real Housewives Twitter Poetry (Alien Buddha Press, 2022), was longlisted for Perennial Press’ 2022 Chapbook Awards. He has had fiction, poetry, and literary reviews published in Quail Bell Magazine, Lambda Literary Review, Barrelhouse, Sage Cigarettes (Best of the Net Nominee, 2023), ‘Stories About Penises’ (Guts Publishing, 2019), and more. For more, visit carriganak.wordpress.com or on Twitter @carriganak.