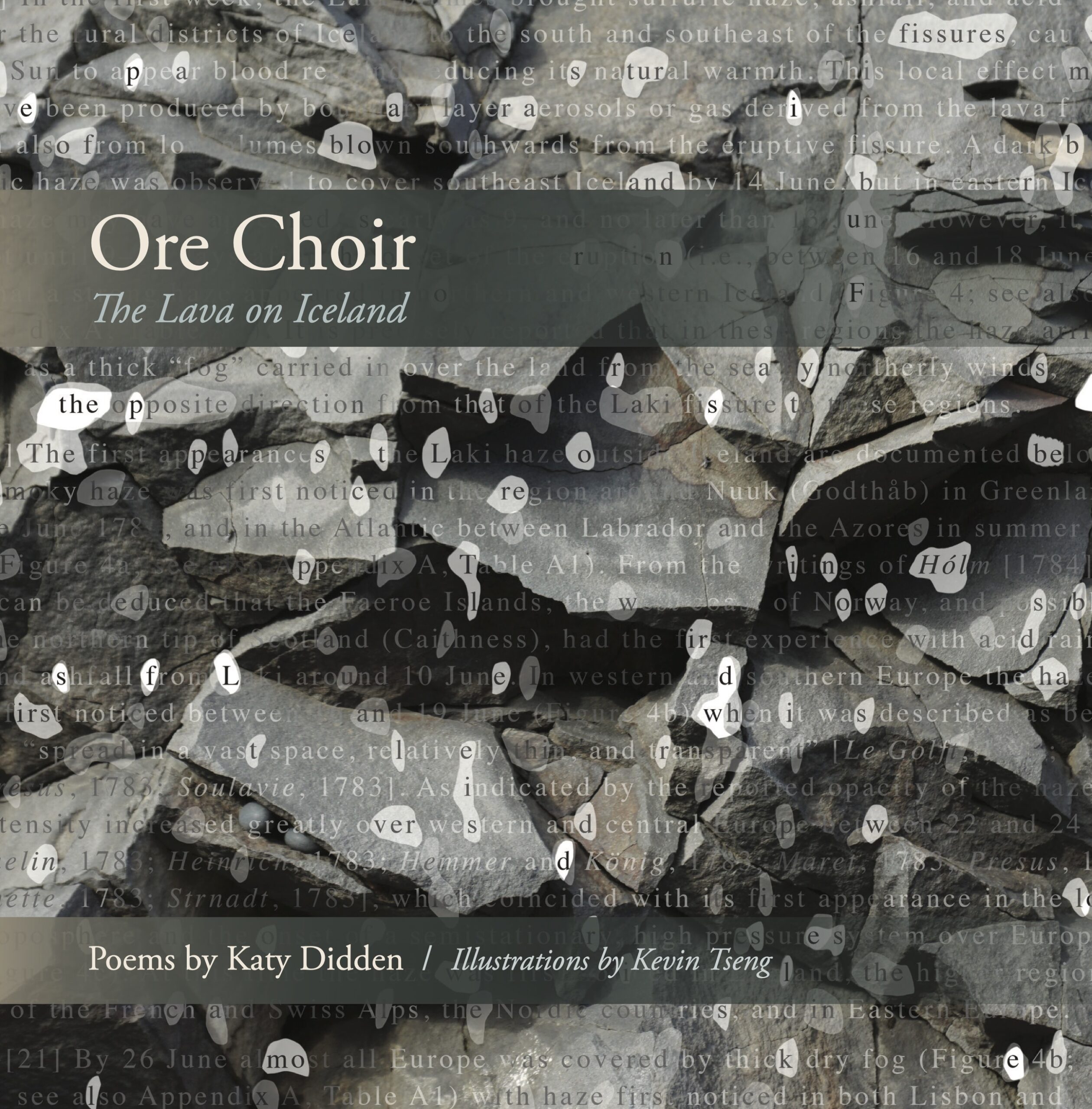 Lyrical erasure is a profound concept found in Katy Didden’s Ore Choir: The Lava on Iceland.  This solid compilation of poems illustrates lava pouring over and through the metallic muse of Didden.  The molten substance, inching its way over Iceland and the reader’s psyche. The artistic renderings of Kevin Tseng, striking, perforated, as one might see in a lava rock, jagged and black.

Didden’s poetry is thick, like the hot, oozing lava that permeates the land – the “postvolcanic landscape.”  We are further drawn in by the history, the tributaries of ancient Icelandic poetry, “its craters of dove-gray ashes matted with snow, / attracts artists who siege eddas in the rills.”  These powerful lines draw out the significance of Icelandic poetry in our time.  Moving around Iceland, [I adore canoes] slices through the frozen ocean water. Drifting as does the burping mountainous orange cone full of steaming magma.

In, [Two Go Out], the shape of the erasure resembles cerebral art – a brain-like picture, to make us think and visualize the division of the lavafield.  /One plans a feast, / one a siege… /a plume of steam/ rises/ like a hired gun/ out of the ruin.”  The ruin of the mind, the preservation of an ancient land.  The words cast out like a skull permeated around a brain-like structure.

Iron ore, metallic, minded for its value, “I wanted iron songs/ample time/ a sphere concert, / an ore choir – / the core’s sly music.”  The erasure for [Ocean Erased] takes on the attributes of smelted metal, bursting with heat and steam and a silent music. A violation of rust, just a day of rain or dew away.  Profoundly, the music emerging from the very center, essence of the volcanic seize.

[Oh Soft! what sun] pours onto the page in shades of green – the algae that has nested upon the façade of the lichen, miles from the ocean, erosion a by-product.  An array of colors, an attribute of the speciated fungi. A [revery -] of microbes built into beautiful [gemmed lines]. The corresponding erasure, a square and accurate rendering of the poem held within.

Poetic music arises [Inside time/the future rises], proofing as a [loaf/fit for its tin].  These lines flow as rhyme, the erasure, a mushroom cloud of an explosive nature.  As we meander into the section, the SCIENTIST, questions the LAVA, the layout shifts the basalt, the rusting ore.  The erasure on the left, the plucked words to the right – a fight breaks loose.  The scientist sparring with the lava.  Lakin – “a broad measure of days,” takes on [LAVA] compiled of “fissures, blobs and brine…a red sun/, shorn of its rays.”  Repetition follows, “The past,/ the past.”  The lava doesn’t know what the scientist knows.  The lava only knows its fiery rocks, covering the expanse of the land, oozes beneath its wake.

A significant part of this work is credit to art and ruinous natures of the erasure pictures. Tseng aptly takes on colors, shapes, space, time, beauty and destruction.  His work is striking and well paired with the poems of Didden.  The marriage of art weaves nicely with the aesthetic nature of the poems.  We are educated, touched with art in the coolness of an icy breeze, warmed by rolling lava.  This beautiful book is truly a journey into a sacred land.

About the reviewer: Michellia Wilson is a 57 year old poet living in Northwest Tennessee.  She is disabled but able to work a part time job as director of a small local library. She enjoys all the poetry she finds on a 200 acre family farm. “Everything is poetry”, as she often writes about the nature around her. Michellia has a daughter and two grandchildren, who live on the “other end of the pond.”  Beside reading and writing,  Michellia enjoys spending time with the ladies in her Sunday School class.

← New giveaway!
A review of Anamnesis By Denise O’Hagan →