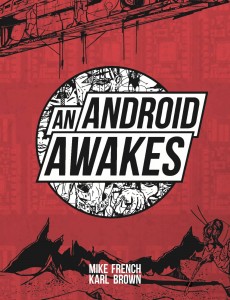 I remember the simultaneous horror and intrigue I felt when I read Ray Kurzweil’s The Singularity Is Near: When Humans Transcend Biology some years ago. The idea of man merging with, or being overcome by, Artificial Intelligence is not new, but never have I read such a terrible and evocative account: one that presents this technological singularity in a positive light, or so imminent a possibility. An Android Awakes takes this notion and runs with it, presenting a futuristic dystopia where androids are in control. Because the Androids have significant emotions, though not entirely anthropomorphic ones, the book conjurs Bladerunner, Metropolis and The Matrix, but also references Orwell’s 1984, Adams’ The Hitchhiker’s Guide to the Galaxy, and hints at Burgess’ A Clockwork Orange, and Mieville’s Perdido Street Station. This is science taken to its extreme, and it’s both terrifying and oddly evocative. It is, at times, also quite funny.

Karl Brown’s full colour and very detailed illustrations add strong visual appeal, following the lines of the stories, and are sufficiently horrible, in a visually beautiful way, to increase the cognitive dissonance of the book. This is further strengthened by the rather clever meta-fictional plotline in which Android Writer P121928 has been attempting to get a story accepted for publication. He gets 42 attempts, a nod to The Hitchhiker’s Guide to the Galaxy and if he still hasn’t had an acceptance, he will be deactivated. The Scheherazade-like Android Writer P121928 is an interesting protagonist, and despite his android-ness, he’s certainly not without feeling: “I’m getting sloppy, emotional: I’m too caught up in the stories. My imagination cannot be trusted.” But he does do some odd things, including taking apart his wife Samantha, and creating a cast of characters that are as real as he is.

The book takes us in and out of the narrative present tense as we are presented with each of Android Writer P121928’s stories, and his rejection slips as he edges ever closer to 42. Each of the stories are cleverly interwoven, with motifs repeated – an angel fish, characters, settings, and plots picking up from previous stories in a way that is both satisfying to the reader and oddly conspiratorial – as if there were some underlying message here that the reader needs to uncover through the hidden patterns. As is always the case with French, the relationship between dreams, reality, time and space are all distorted, but not so much that the stories fail to delight with their sheer inventiveness as we travel around the universe in an Absolute Zero spaceship which functions by keeping as still as possible, encounter, among many other delights, time travelling locusts that consume every orange from history, a watch that keeps perfect time in zero gravity, Panthalassa: The All Earth Sea – a conglomerate sea formed by floating all the oceans into the sky, complete with all types of marine animals (thereby freeing up real estate on the ground for an increasing population), cats that can be kept in the freezer and unfrozen when desired, and a digitised treasury that keeps all of our memories (this one particularly reminded me of 1984). There are so many delightful connections between these stories and they’re so rich and complex that I feel the book could be re-read several times. There are political undertones that bring the most unsettling degree of verisimilitude to the story — some of what happens here is all too possible as we are confronted with extreme capitalism and the impact of human greed, desire and laziness.  The book is smart, at times hysterically funny, and actually quite evocative in its science, for example, at one point two Martian astronauts are put to sleep and find out that:

All possible events are built into the fabric of the Universe and time emerges from these events only in the mind of the observer. It is in fact what seeds their consciousness. It a normal waking state the human mind decides which events to focus on to provide a stable sense of self that it can cope with. (159)

An Android Awakes is an entertaining, sexy, terrifying, and beautiful novel, full of bleakness and fun. While the book is probably not going to suit the prudish or faint-hearted reader looking for an easy read, other readers will enjoy the rich and powerful language, the complex plot lines, and the wacky and inventive landscape that both French and Brown have created in this superb graphical novel.