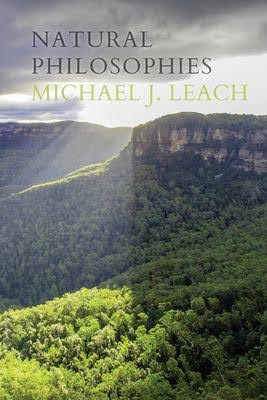 Michael Leach’s poetry is a visual delight. As with Leach’s debut chapbook Chronicity, a majority of the poems in Natural Philosophies present a visual representation of its theme. Poems swirl and reflect, bulge out and disintegrate, float like clouds, fly like geese or in true concrete style, the words themselves become the thing they’re describing: a koala, a bunny, a gene sequence, a cresting wave, or gust of wind. Leach is a scientist and this shows in his preoccupations, with the natural world and our place within it as actors, colonisers, in sickness and caregiving. The focus moves from heavenly bodies to human ones, from the earth to the mind, all with a precision that reflects Leach’s methodical process.

The first part of the book, “Planetarium”, as the title suggests, is expansive. We begin at the earth but look upwards to the stars. Leach manages the balance between the inherent joy of scientific language and the sensation of wonder as in “Eight Minutes, 20 Seconds, and an Instant” a reference to the time it takes for sunlight to travel from the sun to the Earth:

To depart an ever burning orb,
traverse 150 million km of space,
filter through five layers of gases,
and reach an ever-orbiting orb

The poems takes a beginner’s eye to such things as the basis of colour, jellyfish in the ocean, mathematical equations, and statistics, but always with a concurrent focus on the interaction between the human and nature as a part of a single complex system:

I close my eyes but still see your fire
twirling on the back sof my eyelids.
in this afterimage, I glimpse
a familiar face lit by flames.
I consider my sample size;
n = 1. (“N of 1”)

The poems combine careful observation, visual play, and sonic elements like the repetition of sounds, anaphora and parataxis, working from the human to the ecological, from the the earth to the the cosmos.  Anaphora or the repetition of words or phrases, is something Leach does particularly well throughout the book, combining what feels almost oratory with visual effects as in “Keeper”:

I
keep watch on my earthly
keep -sakes while sipping from my
keep cup,

The second part of the book, “The Biospychosocial Model” moves closer into the human, tracing a path along the body, from injured hands to Frida Kahlo’s broken back, the Cancerous lungs of a passive smoker, the pathway of paracetamol through the body, a diabetic pancreas, or Covid-19. Leach draws on his pharmacoepidemiological research work to create novel poetry that explicates the medical through a range of constraints.  For example, in the poem “Corona-gram Distillation”, each line of the poem contains only letters from the word Coronavirus:

Throughout the book, the link between the physical and the emotional is ever-present and forms the foundation for the linguistic play. While many of the poems, particularly in the latter section, take a clinical perspective, they are never sterile or lacking in an empathetic sense of the personal. Some of the poems are particularly moving, such as the mother poems, which progress from treasured artefacts visually and semantically depicted to the contrast between the loss of a parent and the joy of a family pet. This section ends with  a flow of DNA, forming a kind of permanent thread that endures. There is much pleasure to be found in the playful, clever, and moving poems that make up Natural Philosophies.

← A review of Ask No Questions By Eva Collins
A review of Almost Deadly, Almost Good by Alice Kaltman →