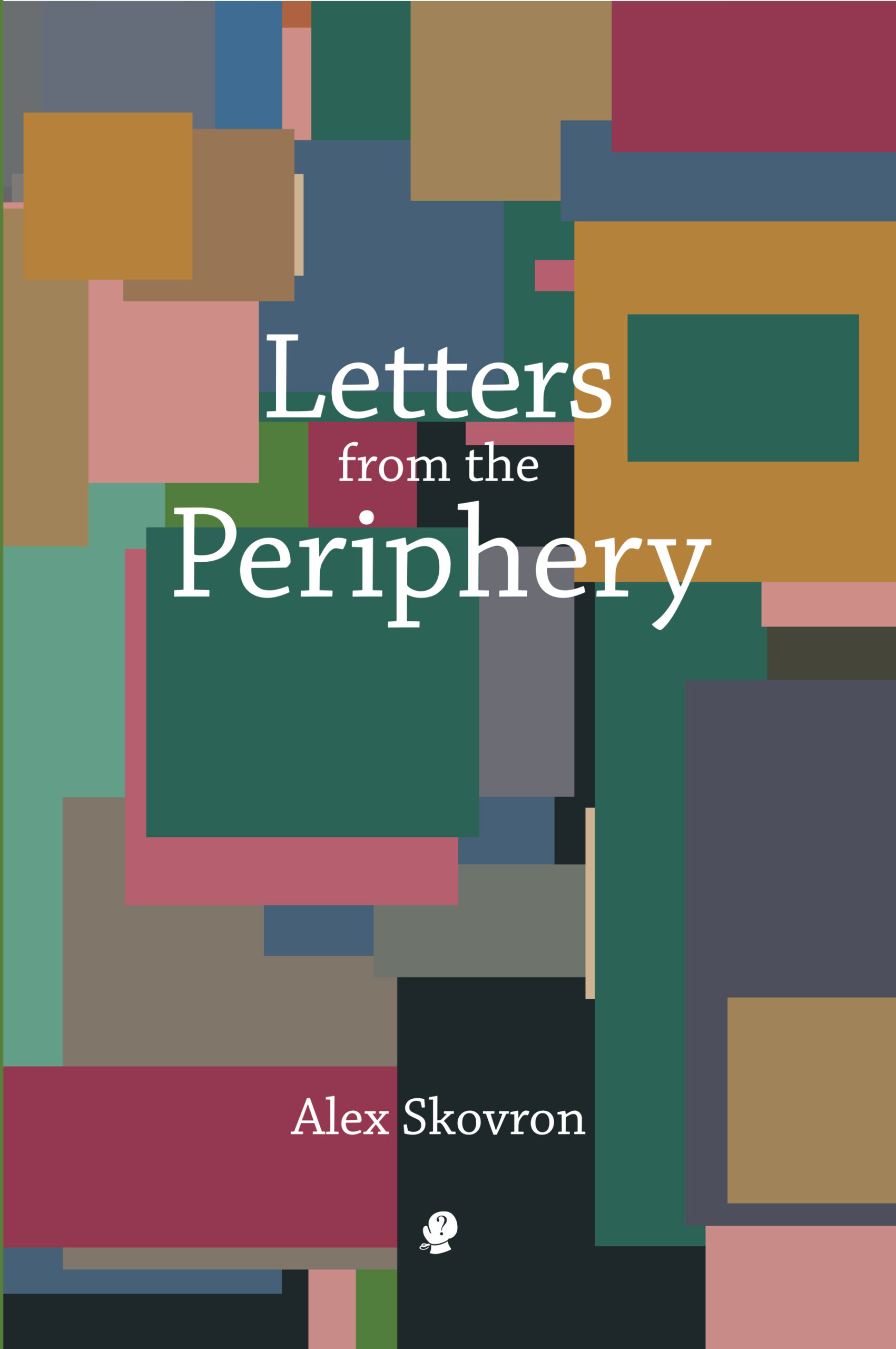 There is a sureness in Alex Skovron’s latest collection, Letters from the Periphery. The poems are often set up as a tableau, pivoting around a scene, a specific place or a person, where there is little motion other than the passing of time. Time is a force that moves through the work in many different ways – as memory, as entropy — ruins, photographs, calendars, visitations, falling leaves, a falling tear, a backwards glance in lost languages and spaces that no longer exist. Some of the poems are travelogues, tracing visits to cathedrals in Europe, castle ruins, a train trip, a monastery.  Always there is a conjunction between the act of writing and the scene which is being depicted and between the moment being described and the moment in which it is being read.  This complexity between time and space is subtle, functioning on many levels in the quiet present tense of observation, the chaotic frenzy of war, or a delicate sense of longing, always with a sense that time has already passed: “In those years we could still remember the future”.

Though the work is often wry, philosophical, and deeply intelligent, there is often a sense of intimacy. One of my favourite poems is the beautiful “To My Half-Brother”, a letter to a sibling gassed with his mother during the Holocaust:

If not for you, where would I be now?—I mean,
If not for the labyrinth, your innocent fate, your little life.
And so I speak to you like this—how else can I?
Until we meet in some unspeakable realm, look at each other
In that timeless, placeless domain, embrace and fall silent.
Ghost of thing we were, phantoms
Of what might have been, and might have not. (“To My Half-Brother”)

The moment of connection is so immediate that the reader feels almost ashamed to witness such mystical connection between the living and dead. The work is sad, but it feels more like transformation than grief, as if the poem itself were reaching back in time to heal the rift.

Many of the poems in this book are enriched by art and music. There are a number of Ekphrastic pieces, and music is woven throughout the book, through direct reference, as well as subtle rhythms that mirror the semantics of the work in barcarolles, balads and sonatas.

You stop, listen. A piano’s rhetoric has been looping
Inside your skull: Sonata 18, that glorious leap
Into bar 46—(“Aubade, Allegro”)

There is also the mythological, such as the Muse Euterpe, patron of tragedy and the flute, in the suite “The Light We Convert” which builds its rhythms through meter, rhyme, repetition, and an extended meta-poesies that treats the poem as a symphony:

Just several of the shades to whom I credit
My misadventures in Euterpe’s realm.
I am a fabbro failed
Will my symphony ever see the light?

Several poems are mini-stories, coupling nostalgia with droll humour. Alice eschews a trip back to Wonderland, a musical director becomes cranky with his sibling trio of vocalists (“Katoomba”) and decides to send everyone home in favour of re-orchestrating for air-guitar and strings. There are ‘lucky-dips of guilts’ and physics jokes: “strong force, weak force, strings/open and closed, what a recital!” (“The Other Side”). The New York Times Crossword is attempted through a train trip from Canada to New York City to sign divorce documents: “That pesky 49-across.”

Often the poems have a dream-like quality, the familiar taking on a surreal, Twin Peaks like inversion as it creates these strange portraits, as in “Apokryphon” – “A leering urchin passes, walking with a broom. Curtains/part, discreet.” Skovron’s detail is painterly—the drape of clothing, the angle of the head, light falling in such a way that there is almost a magical aspect to the characters. They are slightly outside of the scene, being watched while watching:

the wind clouding her face
the way the shopfronts suddenly share
diminished light, the way no voice
could say her sadness, (“Diminished Light”)

A section of poems in personae use key historical moments as a starting point. There is dramatic irony in the monologue of a Trojan horse builder in 1185 BCE as he worries about the impending failure of the horse he is building, which the reader of course knows will succeed. St Simeon of Aleppo in AD 453 sits atop his obelisk contemplating his own endurance. Bartolomeu de Gusmão muses on the development of the lighter-than-air airship he designs, and a man recalls his irrational revulsion at meeting a young Hitler during a performance of Tristan and Isolde conducted by Mahler. Form is handled deftly throughout the book, whether sonnet or a Dante inspired Canzone, which, given its reference to Virgil, serves as a preamble to the translation of Canto 1 from Dane’s Inferno that follows it:

Midway along the journey we call our life
I found myself within a dark forest
Having strayed from the path that was straight.

The book ends with the title poem, an extended seventeen part sequence of mostly sonnet-styled “notes’ that pick up many of the threads of the book through philosophical musings invoking Heraclitus, Shopenhauer Pascal, Aristotle, Goethe, and Wittgenstein to name a few.  The poem sets up a complex relationship with the reader—polite and intrusive at once, in which the reader becomes the pursued. This creates cognitive dissonance—where an agreement with the reader is effectively obtained as the narrator pardons himself in exaggerated politeness, asks permission, disavows being a stalker, and then continues to press an intimacy that feels increasingly uncomfortable: “Your presence and my wanting are the same,/They are identical, and they want to merge.” This sense of intrusion grows through the sequence, but additionally so too does the unreliability of the speaker, who, amidst Wittgenstein and Shakespeare puns hints that the subject-object relationship in the work may not be what it seems: “I have no need of keys.”

Skovron’s rich knowledge of classical literature, music and art is always in play through his work but never heavy-handed. Even Dante feels at home here, nestled between desire and loss. Letters from the Periphery is a clever, tricky and sophisticated book that rewards the reader with subtle rhythms, complex structures and wordplay, and erudite referencing.  Letters from the Periphery is a book full of allusion and illusion, puzzles, mystery and a deep sense of the wry games that time plays with all of us.