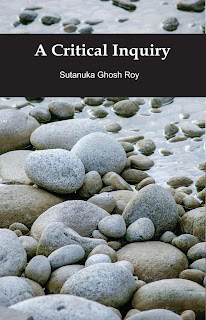 A Critical Inquiry by Dr. Sutanuka Ghosh Roy is a collection of twenty-nine scholarly essays, two or more essays being included in eight sections namely, Dalit literature, Diasporic Literature, Indian English Drama, Indian English Fiction, Indian English Poetry, Literary Theory, Partition Literature and World Literature. Many of these essays have already been published in different journals of repute and I think, Dr. Ghosh Roy intends to eternise her insightful essays by culling them together between two covers of a book. And, this is no doubt a thoughtful venture demanding kudos.

It would be worthwhile to focus on quite a few essays from the collection. In the first essay, “The Different World of Bayen”, from Dalit Literature section, Ghosh Roy points out that, the different space allotted to the Dalits by “so-called unity of Indian nationhood” which is ultimately “a space where caste-based atrocities, bonded slavery, witchcraft, violence on women are part of the everyday life of these people.”  [p.13] And Ghosh Roy goes out to judge the Mahasweta Devi’s play ‘Bayen’ centring round Chandidasi Gangadasi, a Dalit woman, exposed to the politics of representations which brings their trials and tribulations to the fore. Such local tales of oppression have a global appeal, no doubt. In fact, all the three essays of the Dalit Literature section are on Mahasweta Devi’s seminal works like Douloti, Draupadi, etc. One essay is dedicated to Satyajit Ray’s Sadgati.

In the next section, Diasporic Literature, the two essays are quite seminal, one is on Manju Kapur’s The Immigrant and the other one is on the works of Shauna Singh Baldwin. To quote Ghosh Roy:

The Immigrant of 2008, is a diasporic novel by Manju Kapur, an Indian novelist. This paper offers a critique of the novelist’s struggle to negotiate with the immigrant experience through the intimate portrayal of a newly married couple now living in Canada, reflecting upon their diasporic experiences. (75)

…The Immigrant chronicles the lives of two NRIs, Nina and Ananda, and their newly married life in the 1970s Canada. (77)

While expatiating on Baldwin’s works, Ghosh Roy raises the question of cultural identity which plays a vital role in determining the diasporic experience of the people. She says:

There are two ways of thinking about cultural identity; the first arrangement defines cultural identity in terms of a shared culture, a sort of collective ‘one true self’.  Within the terms of this definition, cultural identities of the diasporic people reflect the common historical experiences and shared cultural codes that provide them, as ‘one people’, with stable, unchanging, continuous frames of reference and meaning, beneath the shifting divisions and vicissitudes of their actual day-to-day history. Another view refutes it by pointing to critical points of deep and significant difference despite the many points of similarity. These points constitute what they are in reality or rather what they become. The diasporic people cannot speak for very long about one experience, one identity, without acknowledging ruptures and discontinuities. (94)

In the next section, “Indian English Drama”, four essays are there in total, two of which are on Mahesh Dattani and the other two are on Badal Sircar. In the analysis of Dattani’s Tara, Ghosh Roy lauds the playwright’s diction as well as characterization. Gender discrimination, lack of equal opportunity to men and women, the girl child being considered as a lesser mortal in comparison to the boy child are the issues Ghosh Roy stresses upon while discussing Tara in detail. In the other essay on Dattani, Ghosh Roy’s chief concern is “invisible issues in the plays of Dattani”, like homosexuality, lesbianism, the deplorable plight of the eunuchs[hijras] while she talks about a not-much-talked-about plays of Dattani, Seven Steps Around the Fire and On a Muggy Night in Mumbai.

In the Indian English Fiction section, Ghosh Roy has four insightful essays, one on each of the four powerful writers like, Amit Chaudhuri’s Afternoon Raag, Salman Rushdie’s Midnight Children, Jhumpa Lahiri’s The Interpreter of Maladies and Shashi Deshpande’s novels. A variety of discourses have been touched upon in these essays: Doppelganger selves in Chaudhuri’s novel, Bipolar nature of Indian Decolonization in Rushdie’s novel to the social standing of the subaltern women in Jhumpa Lahiri’s short fiction and the realistic portrayal of the Indian middle-class educated women in Shashi Deshpande’s novels.

The section Indian English Poetry is quite daring in its inclusion of all modern age poets like, Adil Jussawalla, Sanjeev Sethi, Meena Kandasamy and Vihang A. Naik. Mostly, she looks for a hint of a world other than the real, mundane workaday world in the creations of these poets. Fantasizing a witch, the plight of a Dalit woman, the City of dreams—all serve as the grist to her mill, while Roy is out to examine and analyse the poems of the aforesaid poets. Ghosh Roy deals with each particular work of the poet and delves into It critically.

In the next section, titled “Literary Theory”, Ghosh Roy puts five seminal essays, mainly on Mahasweta Devi, Amitav Ghosh and Nandini Sahu. Devoting two chapters to Ecofeminism and Celebration of Womanhood she justifies the appellation to be used with regard to Nandini Sahu’s  Preface to ‘Sita’ and  ‘Zero Point: A Collection of Poems’. Her discussions on Amitav Ghosh’s ‘The Shadow Lines’ and the questions of motherhood in Mahasweta Devi in her ‘Mother of 1084’ are insightful and striking.

In the penultimate section, “Partition Literature” , Ghosh Roy takes the point head-on and talks about Partition, as a historical event that leaves the unfortunate lot, losing their land and seeking refuge elsewhere , turning the affected populace into gauche, hungry lot in her essay ‘Memory and History in Fiction’, analysing four novels by Adhir Biswas, Sunanda Sikdar, Jyotirmoyee Devi and Sunil Gangopadhyay. The other two essays on Amitav Ghosh’s ‘The Shadow Lines’, focussing on the question of searching one’s homeland and the Woman Question simultaneously, are doubtlessly well-conceived and written to shake the readers out of their false notions and preconceived myths.

The last but not, of course, the least, is the section titled “World Literature”  which mainly deals with European Literature, focussing on T.S. Eliot’s Dissertation on F.H. Bradley, Jane Austen’s ‘Pride and Prejudice’, Mary Wollstonecraft’s ‘A Vindication of the Rights of Women’ and John Stuart Mill’s The Subjection of Women: A Re-examination’. The way Ghosh Roy throws light on these works isanalytical, novel, hence laudable.

A detailed Bibliography at the end of the book would have come in handy to aid students and researchers, in addition to the Works Cited attached to each essay, stating the works the writer has consulted or quoted from Nevertheless, I am sure this compendium of critical essays will surely help students, researchers and academics.