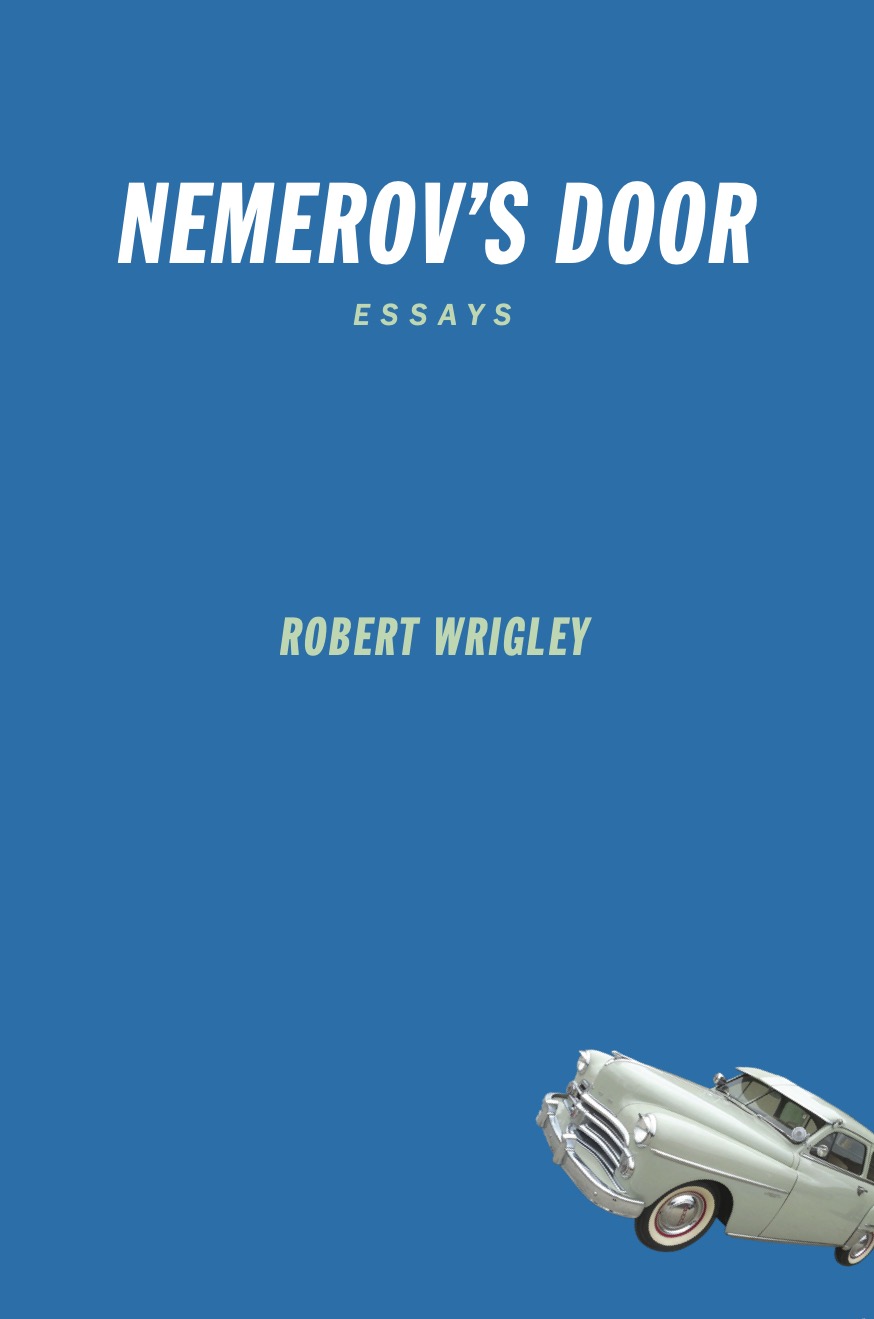 In the unassumingly blue-covered Nemerov’s Door by Robert Wrigley, we find a dedication to language that is a rarity in the essay form. With a penchant for precise language like that of Charles D’Ambrosio and a caring for where the raw verse comes from like that of the late Randall Jarrell, Wrigley Shows us that poetry as a form is both a metaphysical craft and form of work that must be created with repetition to achieve any kind of greatness in the genre. “The product will come only with work”, Wrigley writes in the second essay of the collection. “And the holy ghost of it all, the imagination,” is what Wrigley tells us will be the ultimate recipe for a completed poem of any significance.

For what Wrigley does so well with analyzing his own and others’ poetry, there is also a uniqueness with his ability to switch between poetic analysis and intimate memoir on command. The book as a whole is a highly original composition in that it succeeds in combining close readings of poetry, personal narrative, and poetry by Wrigley himself. All of which are quick to grab readers’ attention with a highly in touch sense of pathos and nostalgia.

This is especially so in the essay Under My Skin, in which Wrigley goes into specific detail regarding his childhood love of an uncle and the musical presence of Frank Sinatra. Just in this short memoir vignette we are a party to Wrigley’s sense of reasoning in terms of why he writes with a highly unbiased point of view a great deal of the time. Not only does Wrigley let us in on his sensitivity toward Sinatra’s music itself. But, throughout the essay we become familiar with how Wrigley himself is forced to view the world through a rather middle of the road perspective. We read that Wrigley is a conscientious objector to the war in Vietnam. This comes in contrast to his father’s own conversative political views. However, the passages are not written with a total scorn for military endeavors. They are written, in Wrigley’s mindset, as a harsh reality of the time in which any young man could have been drafted into military service. As well, we are met in this same essay with a very sharp sense of historical perspective that paints a picture of early 1970s America and the contemporary clash that was taking place between hawks and doves.

Under My Skin further exemplifies a dedication to the idea of change that we see throughout Wrigley’s writings. We can see this when we are guided through the change of Wrigley’s father’s thinking on the prospect of the war in Vietnam at the time. Not without forgetting his own democratic politics, Wrigley writes of his father, “And yet by some miracle, come 1972 we found ourselves, my father and I, working together for the election of that good harbinger of Democratic moral superiority and ruin, George McGovern”. McGovern in the era was a force for stark change in the face of the Richard Nixon administration and a strong opponent to the war in Vietnam. This is significant because while Wrigley does write with a liberal mindset and tone, he doesn’t completely discount the reasons why people are conservative and indeed why they are liberal. At least in some fashion, the writer is telling us that time and history, in fact just like poetry are all open to tonal and altitudinal changes in terms of where their opinions and convictions lie. Perhaps it was not Wrigley’s intention to show us the potential that poems, just like men, have the profound ability to change on a dime based on experience. Even more relevant to this point is that Wrigley does not seem to exude a relishing in the changing of his father’s opinion towards the war.

It further cannot go unmentioned the masterful way in which Wrigley performs a poetic analysis of poets James Dickey and Sylvia Plath. Wrigley, as well as scribing a rather in depth memoir into the topics of his own life, relishes in the analysis of other poets than himself. He does it too in a way that wraps the narrative with the analytical in a way that reads almost scientifically. Specifically, Wrigley does this in his most detailed fashion in the essay Of Failure and Shadows. What makes the analyses of James Dickey’s poems so interesting is the unbiased way in which Wrigley puts them under the literary microscope. The author is able to write of both a sympathetic and a pitying attitude toward Dickey as a human being and then simultaneously explicate his poems in a way that seems as if he were a critic outside the knowledge of who James Dickey really was. “He was brilliant and outrageous,” Wrigley writes. This one line tells us that Wrigley viewed Dickey as a somewhat inflammatory personality, but that nonetheless he respected the poet’s work. And this is displayed in no better area than in the explication and unraveling of Dickey’s poem, “The Lifeguard”. Wrigley spends the better part of five and a half pages absolutely disassembling the poem with his analysis in a way that informs us of his true academic and poetical prowess.

Finally, one could not hope to review Nemerov’s Door without at least divulging for a moment into poem which caps the end of the collection of essays. Wrigley’s lengthy opus Arrowhead is a love note to the natural realm of the state of Idaho. And it, while oddly placed within a book of non-fiction, fits perfectly with the subject matter of the previous essays. Admittedly, the poem is in some places sardonic and perhaps loathsome of the lay person. However, with a syntactical style that is very much tributary to Ginsberg and Whitman, Wrigley weaves us through the Idahoan landscape in a way that makes us consider not just nature itself but the nature of the written verse. In one couplet Wrigley admits, “This document is in some way my form of prayer/and I pray most often to certain trees”. This sense of mysticism that Wrigley attributes to his poetry is the very thing that gives the poem a sense of gravitas in juxtaposition with the Idahoan landscape.

The image of the arrowhead though is perhaps the most important of the entire work, including the essays. In one of the opening compositions of the collection, Seeing Arrowhead Seeing Flint, Wrigley likens the finding of a perfect arrowhead to the process of writing the perfect poem. “You have to scramble over nests and deadfall snags and beaver dams; you have to circumnavigate vivid green stands of poison ivy,” he writes. “You had to want to get there” (23).  This searching that Wrigley speaks of is about arrowheads and sauntering among the natural realm to be sure. But also, the saintly act of pursuing the poetic image, as Wrigley often refers to it, is likened to the excavation of historical tokens that remind us where we were and where we are headed in time. It’s worth mentioning too that Wrigley adds a sense of historical context to the closing poem. He speaks of history as though it were a stratigraphic epoch in which we ought to seek out perspective on our own lives. He speaks of a time not in the distant past when, “a law forbidding/the marriage of pf a Mormon to a non-Mormon”, was the law of the land in the region. But, at the same time, when residing in the landscape in a romantic way Wrigley admits, “That the central Idaho wilderness/is where God lives, which is to say, nobody” (174). This juxtaposition of ideas hints that Wrigley is a poet of malleable beliefs upon the concept of mysticism. Acknowledging the laws of the church while simultaneously admitting that the presence of God might mean the presence of absolutely nothing is a very interesting concept that Wrigley brings to the forefront in the poem.

Ultimately, Nemerov’s Door is a collection for the poet by the poet. Robert Wrigley is a writer of renaissance understanding in terms of language, religion, philosophy, and understanding of literature in general. And he makes this combination work in a way that is highly readable even for the layperson. The book is filled with a sincerity that makes parsing through the literary language a well worthwhile prospect.

About the reviewer: Matt Cooper is a senior Creative Writing Graduate Student at Wichita State University. He has written for the WSU Sunflower Newspaper and studied at Butler Community College and Kansai Gaidai University. He is also the author of two books of poetry, For the Love of My God, Mama (2019) and We ‘til Death Do Part (2021).

← A review of The Sauna is Full of Maids by Cheryl J. Fish
A Q&A with Mike Mattison and Ernest Suarez →