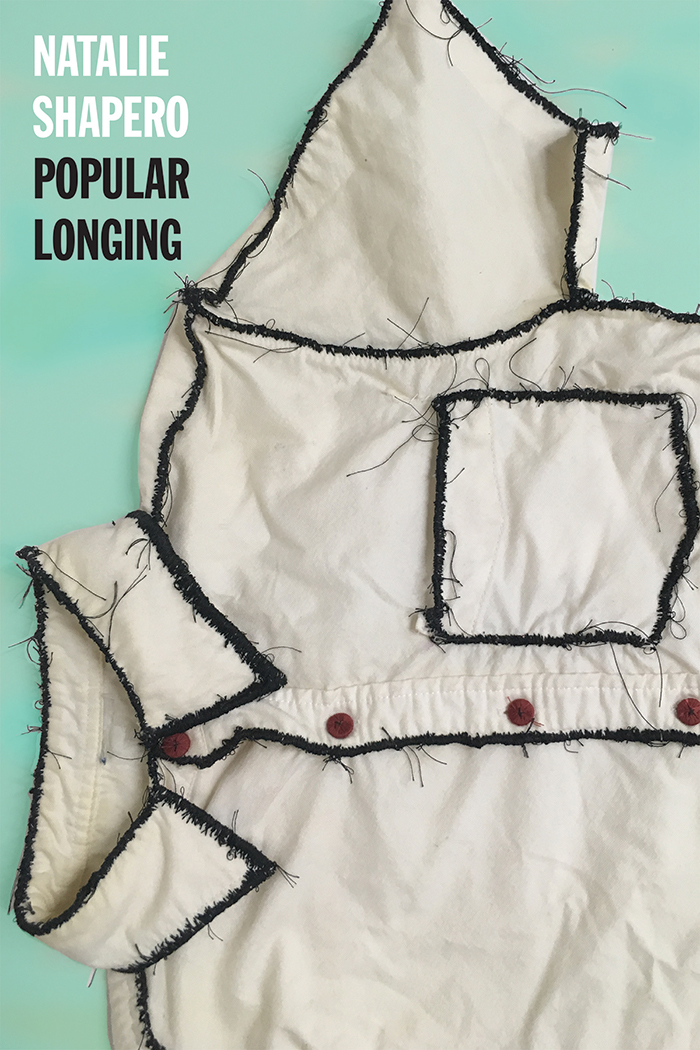 In the final poem of this remarkable collection, a poem puzzlingly called “Pennsylvania,” Natalie Shapero muses that other children when she was growing up routinely invoked “the inner light.” Then she reflects, “That was so long ago, / I’ve since ceased my believing in death – // there’s no such thing.”

Death is a major preoccupation throughout these marvelous, often hilarious poems. Its first reference comes in the very first poem, the likewise inexplicably titled, “My Hair Is My Thing.” Shapero writes,

Last week I read a novel about a man
so awful that when he died I wept
because it was fiction.

Snap! Actually, there’s an earlier poem, that comes like a prologue just before an epigraph by the Belgian surrealist artist, Rene Magritte (so appropriate to this collection). “Man at His Bath,” based on a painting by Gustave Caillebotte (art is another important theme throughout Popular Longing), contains an allusion to “THE NEXT LIFE,” so we’re already off and running toward our fate – though we could very well be running in circles, stumbling blindly down deadend streets.

Death. Suicide. Punishment. It’s all there, and yet, “it’s not like anyone gets the ideal / death,” she observes in “It for Me.” In the poem, “Green,” Shapero worries about how she is perceived by her colleagues, but then, “when all my friends began / to die,” she hits upon a strategy of “proving / myself through inattention to their passing.”

I underwent my yearly performance assessment
and was prompted to name a task at which
I excelled. I responded TRULY KNOWING
THAT DEATH IS A PART OF LIFE.

Death is a coping strategy! The poem, “And Stay Out” begins:

Rough days I’m trying to live
as though dead, to satisfy
or at least dampen the inclination
to actually die.

But what about Heaven, after all, “the next life,” the afterlife? When she considers a man who once attacked her, in the poem, “California,” and “he died and became himself / just a flash in the mind of the world,” was he actually anywhere at all?

I don’t believe in Hell and also I don’t
believe in nothing, so that leaves only
Heaven. I have a couple
questions. It is my understanding
that the weather in Heaven
has only a single setting,
which is PLEASANT.

Drink while you can
because I hear from a dead guy
there’s no alcohol in Heaven.

All of this musing on dying and what comes next brings a smile. As one back cover blurb notes, “Shapero sounds like the closest American poetry has come in decades to stand-up.” She’s really funny!

At the center of the collection is the breathtaking tour de force entitled “Don’t Spend It All in One Place,” a series of fourteen fourteen-line poems (though not exactly “sonnets” in a metrical sense), whose themes of  violence and art and time, coming “unstuck” in time, make one think of Billy Pilgrim, Kurt Vonnegut’s anti-hero in Slaughterhouse Five.  There’s a similar dark humor at work in Shapero’s poems.

Shapero contemplates museums and violence done to works of art, reflecting on “the man who drew his gun / and shot up a wall of old masters and then himself.” And she asks a few poems later, “What I want to know is what does it mean to take out / anger on an object…” To continue the theme, a few poems later she writes:

The predominant response to acts of outcry –
whether directed against a museum or merely
executed within its walls – is to archive the evidence,
wait fifty years, and then mount a broadly publicized
retrospective: FIFTY YEARS OF PROTEST ART.

FIFTY YEARS OF PROTEST ART recurs a few poems later. This all plays on the larger themes of death and time, and so, five poems in, she considers the visitors at the aquarium, so like museumgoers in general, contemplating a ninety-year old sea turtle and feeling, by comparison,

lithe and hot. This wish to feel young – recalling
my own past, I can’t imagine desiring to go backward,
but of course I am aware it’s a popular longing.

A popular longing…and so the narrator confesses to “losing track of time.” “I can’t / even view a painting anymore without picturing / its future: knife marks, singes, punctures….” Unstuck in time. “Fake Sick” spells it out: “”The past is the same as anything else – we built it / and now we can’t kill it.” The poem “Fifty” plays on a similar yo-yoing of time, in which she suddenly finds herself fifty years old, having been catapulted through time on the strength of a casual remark. “I was fifty and my worst // mistakes I’d made just yesterday.”

It’s difficult to write about Natalie Shapero’s poetry without sounding confusing. That’s how surrealism works. It’s a delight to read and to ponder the concepts she plays with – art, time, death – because they are inherently confusing, no easy answers. In a sense she seems like that lady across the street who lives by herself, who harangues you when you run into her on the street, as if she’s starved to spill.

In other words, it’s Shapero’s attitude that undergirds her observations that’s so refreshing and humorous. Take the poem, “Some Toxin,” in which she considers the anecdotal stories about the secret to extended lifespans based on eating bacon or daily shots of vodka, or whatever. “That’s all fine,” she writes,

but just once I would like to uncrumple the Metro section
and find that the key to long life is rage and trauma,
that bitterness girds the organs in equal measure.

Or consider “The Beach,” which begins:

The essence of the attitude? Maybe we just need to get over ourselves, concede that we don’t have the answers. As she asks in “The Greatest Two Minutes in Sports,”

How long until science
Admits that we are worthless