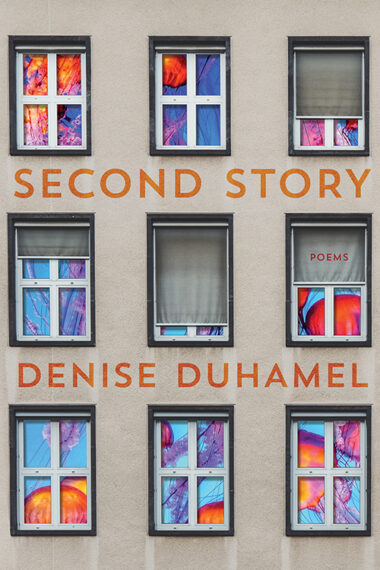 Denise Duhamel can be serious and playful in the very same sentence, solemn and satiric in a single stanza. At the heart of this marvelous new collection is the thirty-five page mock epic, “Terza Irma,” a poem written in terza rima – an arrangement of succeeding tercets that rhyme aba bcb cdc ded, etc. Notably, it’s the rhyme scheme Dante uses in The Divine Comedy, which is appropriate because Duhamel describes a sort of Inferno of her own, her experience of the 2017 hurricane that devasted Florida. She is by turns serious and comic. The adventure spans two weeks, from September 5 through September 18, and like Dante, or indeed, Odysseus, involves a journey “there” and “back.” “I am a troubadour,” she writes in the middle of it, September 13, having returned to Miami after fleeing north with companions, out of the hurricane’s range,

singing of loss, no decent levee,
ringing out my pink Memory Foam
booties. Regret is my melody…

From the chaotic adrenaline rush north (“Over six million Floridians / evacuate with us…”) to the improvised route as they adjust to the changing track of the hurricane, the scrabble for food and gas and lodging, to the return home, picking up the pieces in the aftermath of the devastation, this is truly an odyssey. The poem ends with Hitchcockian foreboding:

All I know that night as I grade
papers is that I am jittery. A
plunk from my faucet makes me afraid,
the sound too much like rain’s mania.
The news reports a new storm unfold-
ing, tracking Irma’s path – Maria.

“Terza Rima” is one of many poems in Second Story that is apocalyptic. Death is very much on Duhamel’s mind. Besides “A Note from Death,” “Swedish Death Cleaning,” “Dear Mortality,” “Grand Finale,” and “Cinderella’s End,” the collection includes two sonnets written “after Wilfred Owen.” Specifically, “The Unreturning, 2019” and “The Unreturning, 2020” employ the same end-rhymes as Owens’ famous World War I poem about the finality of death, and the theme here is the same. In Duhamel’s verse, these relate to the political moments of the Trump administration’s cruel immigration policy and Black Lives Matter.

The book’s title comes from another apocalyptic poem, “Climate Crisis, 2019,” which begins with an epigraph from Sir Robert Swan, the man who once led a project to remove and recycle 1500 tons of garbage from Antarctica – “The greatest threat to our planet is the belief that someone else will save it.” The poem begins:

My Uncle Wil in his wicker rocking chair
riding the waves. I’m watching him
from an almost submerged second story window.
I thought this recurring dream
foretold his death.

Duhamel goes on to describe her uncle as an environmentalist long before it trended, and she likewise considers how the term “uncle” signifies powerlessness, as when you “say uncle,” and then reflects –

So maybe the dream foretold not
my uncle’s death, but a “second story,”
the impending death of the planet,
corporate greed twisting all our arms,
hoping we’ll admit surrender and defeat.

Duhamel has long been a fan of the pantoum, a poetic form composed of four-line stanzas in which the second and fourth lines of each stanza serve as the first and third lines of the next stanza. “Reproduction Pantoum,” “Darwinian Pantoum” and “Snake Pantoum” feature in her previous collection, Scald. Several pantoums appear in Second Story as well, including “Pandemic Pantoum,” a four-page poem that deals with COVID-19, people adjusting, coping with the new apocalyptic threat. This poem begins:

In Pennsylvania, Steve’s dentist cancels his visit,
says his temporary crown will have to do
until it’s safe to open up again.
In Massachusetts my sister’s doc can’t replace her hip,
says her limping will have to do.
What is essential? What isn’t?
In Massachusetts, my sister can’t get her hip replacement,
can’t go for a walk, even with a mask.

Speaking of catastrophes, having just lived through four years of Trump, there’s plenty on that particular disaster, from “Damnation Nation” (“Where a flimsy explanation / of a journalist’s assassination / meets little consternation.”) to “Howl,” a takeoff on Ginsberg’s famous poem, to the second of two poems entitled “Forty-Five [ FôrdēˈFīv] Noun,” a compilation of unflattering epithets for Donald Trump, from “Bunker Boy” to “Cadet Bone Spurs” to “King Leer” and “Boss Tweet.” My favorite? “The Human Tanning Bed Warning Label.”

Second Story also includes many personal poems, as if aging, death and loss of relatives weren’t personal enough.  But as the poet George Bilgere wrote, “We spend our lives trying to understand the lives of our parents.” Of course, understanding the lives of our parents helps us understand our own. Two very touching poems about her father, “Poker Hands” and “Ode to My Father” – “Man who gave all benefit of the doubt” – suggest the very human values of generosity, gratitude and compassion Duhamel celebrates throughout this collection.

And there’s another pantoum, “Mother’s Day Pantoum,” a paean to her mother, her support of her daughters when her sister called with a slanderous accusation, the mix of emotions in the family drama, now remembered as folklore from years ago.  Another feature of the pantoum is that the first line is often the same as the last.  “Mother’s Day Pantoum” begins: “Am I becoming my mother / who tells the same story over and over?” It ends: “Maybe my mother is becoming me.”

Second Story continues a string of amazing poetry collections from Denise Duhamel, from Queen for a Day to Ka-Ching! to Blowout to Scald.  She is funny and illuminating all at once.