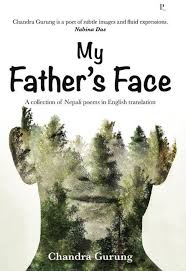 Almost thirteen years after his debut collection of poems, His Heart Hath Not His Country’s Map (2007), written originally in Nepali and translated into English, Chandra Gurung’s My Father’s Face (2020), primarily focuses on three major themes which flow simultaneously throughout the collection of 47 poems: the anguish, loneliness and yearning of an immigrant; the despair and anger at the plight of one’s nation; and also, a celebration of life.

To begin with a few biographical facts, Chandra Gurung was born in a remote village in the district of Gorkha in Nepal, went to Himachal Pradesh in the hilly northern part of India for his schooling as his father was in the Indian Army. As a child, he was often lonely and yearned to be back in Nepal with his mother. Later on, he immigrated to the Kingdom of Saudi Arabia for work. As a child, he was drawn to books and writing and so in Saudi Arabia, he turned back to poetry to express his hopes, despair and yearnings. Gurung has translated many poems from Hindi and English to Nepali and from Nepali to Hindi and English.

The collection, comprising of 47 poems, brings alive the themes mentioned above. It begins with the title poem in which he celebrates his father’s stoic attitude to life and significantly ends with a poem on his mother, in which his identification of his mother with Mother Nature is expressed in a charming simile:

When nimble brooks
Drifted away from the earth’s lap…..
The countenance of the earth glows
Gaily, like flowers.
The way my mother’s countenance glitters
When from a land far-of
I return home (“Mother”)

The parental bonding is strong and he says that he is:
Happy beyond telling
When everyone says:
‘You look exactly like your father.’(“My Father’s Face”)

This happiness, in spite of the fact that the father’s ‘Mongolian identity’ has been hidden under the wrinkles and other signs of ageing. This poem is a strong expression of the nostalgia that overtakes a person who lives away from home and the homeland. Ernest Hemingway’s oft-quoted phrase “grace under pressure” comes to mind in this poem and while reading other poems like “Joy Unbound”, “The Rain Showers Torrents of Flame”, “Mountains: A Widowed Portrait” and “In Life Sings” on:

The green mountains come and sit
On the window, left wrecked by the earthquake
The sun moves, scattering light over the desolate garden
The wind blows, wafting fragrance all over the woods
The rivers flow of their own accord
As though nothing untoward has happened anywhere
The plants and trees sway nonchalantly. (“Life Sings On”)

However, here and in other poems, the poet is not bemoaning nature’s indifference and callousness to the plight of man but rather celebrates life’s redoubtable ability to absorb shocks and disasters and move on:

But the sun, every morning, rises with newer hopes
Like a bird on a charred stump of a tree
Life keeps on singing a song! (“Life Sings On”)

The second, and by far the largest section of poems, beginning with “As You Stooped” to “Party Workers”, dwells on the larger socio-economic and political situation of the nation. It becomes clear that these poems have been written for a predominantly Nepali readership who would be aware of the various allusions to the often violent political history of the nation—the instability that has resulted from the monarchy, the Nepali Congress and the Maoists jostling for power especially for the past few decades since the events that led to the assassination of the family of King Birender.  Also, it is important to remember that Nepal suffered one of the severest earthquakes in its history on April 25, 2015; particularly so, because earthquakes feature in the poems even as metaphors. Although the poet does not make any direct comment about any events, these poems are thus placed in a particular political, social and economic context peculiar to Nepal. “An Old Lamp Post” begins by depicting a normal day:

There is a reference to various riots that have plagued the nation and by the end of the poem the lamp post becomes a symbol for the plight of the nation:

It is unattended like a home abandoned in famine
Like a village devastated by an earthquake
No new bulb has been hung
No new paint has been applied
And my nation stands in the darkness of time
As does this old lamppost.

Due to its tumultuous and violent history, the nation’s Constitution has been amended many times over since it was first drafted in 1959. In “Face of the Nation”, Gurung expresses his frustration and helplessness at the confiscation of the national interest by people with their own vested interests:

In most of the poems, the poet’s anger is directed against the impotent government which either behaves as if it is as ‘helpless as a starved man’ or is callously indifferent to the anguish of the suffering multitudes and acts as if the nation is a paan (betel leaf) or a condom which can be used or disposed of anywhere:

Many days have elapsed
Since any meal was cooked in the old pot
That lies upside-down in a corner of the room
Like a barren womb
It has not been able to conceive a new fetus.(“Hunger and the Important State”)

The nation is not an incensed paan
Distributed at marriage feasts and parties
Which, you can gulp with a swagger
Chew, and swallow all its taste
And spit everywhere, once you are done.(“Nation-1”)

The raw images provide a concreteness and immediacy to the experience which is becoming a reality in many nations today, including India.

In “It’s Pretty Cold”, where everything is frozen and at a standstill Chandra observes a sly smile blooming on the tyrannical lips of a dictator’ at the helplessness of the people while in “Party Workers”:

Even in such darkness
Such frustration
And such dreadful scarcity
A leader
Always sees chances for himself.

Chandra is also scathing in his views about a devout party worker who owns allegiance solely to his leader and not to the nation:

Apart from the overtly ‘nation’ poems there are various other poems like, “An Untouchable Man”, “Vehicle in the Village”, “Prosperity”, “Small Children at Play”, All Cannot be Well”, “When We Meet These Days”, “All is Well” and “There Is a Defect, Somewhere”, which depict the social and cultural milieu of the country. In “There Is a Defect, Somewhere” Gurung laments that, ‘For an individual, personal woe is the only pain’ and in “All is Well” he tries to break down the self-contained, superficial, insular existence of the common man, and is reminiscent of W H Auden’s “The Unknown Citizen” which ends with the statement, ‘had anything been wrong/ we surely would have known’:

I carefully maintain my looks
Dress up myself decently
And follow healthy dietary habits
In fact,
Is everything really fine? (“All is Well”)

And in “Small Children at Play”, he depicts the joyous, wonderful world of the children at play and how when we approach they resist and are afraid because;

At that moment,
The children want to safeguard their beautiful world
That is terrorized by us.

Even in his poems of longing and feelings of dislocation in leading an almost split life due to his immigration like “Land Overseas-1”, “ Land Overseas-2”,“Land of the Old Boatman” and “When A Man Goes Missing”, the poet feels anguish and despair at the pitiful state the nation has been reduced to. When a message at last arrives it turns out to be ‘a two-edged sword’ which ‘slays in sorrows and jabs in joy too.’

There also some poems of love and longing like “Lovely Moon”, “A Shower Of Memories”, “Trust”, “Desert: A Life Of Mirage”, “That Window” but the overriding feeling is that of absence and the concomitant emotions of despair, loss, yearning and grief:

My weary rags
My books, pen and paper abandoned like an orphan
The stubs of cigarette littered like unclaimed corpses
And the scratched mirror—
All await for a single touch
From you.(“Trust”)

In “Poet and Poetry”, “The Antique Hill” and “Life Keeps Writing Poetry” Gurung provides a peek into his ideas of the role of a poet—that of spreading sweetness, love and celebrating life. However, Gurung as can be seen by his nation poems and scathing social poems like “All Is Not Well”, is not merely a romantic poet, but an astute social commentator and the conscience of the nation.  Thus, though we have an abundance of images from nature like the sun, moon, mountains, flowers, rain, birds and flight, we also have stark and painful images of earthquakes, cigarette stubs, lampposts, paan and condoms.

For many days
The flames haven’t played with other flames
In the cold fireplace in a corner
Like a cold bed
That hasn’t become an amorous playground. (“Hunger and an Impotent State”)

The nation, Monsieur
Is not scabies or sore between thighs
Which, you can scratch when wanted
Sitting at a secret place
And derive untold pleasure.
(“The Nation-1”)

My Father’s Faceis a very welcome collection from a neighbouring country, Nepal, and its contemporariness is what makes it both relevant and moving. At some places the editing and the translation could have been a bit tighter, and minor irritants like phrases/ structures like ‘an ocean of deep gashes’ or ’I am delightful’ could be worked on for future editions. Also an Introduction to the volume by the poet himself would help in grounding the poetry in more specific locales and circumstances.

About the reviewer : Gurudarshan Singh, a postgraduate in English Literature from the University of Mumbai, is a former journalist and an independent writer. After a brief stint with a newspaper (The Daily) as a Reporter, a book publishing concern (Navneet Edutainment) as a language editor, and with Saffron Media Ltd (Travel Biz Monitor & Hospitality Biz magazines) as Senior Sub Editor, he has been concentrating on private teaching of English literature to undergraduate and postgraduate students. He is an erudite reader of British, American, Latin-American and European literature. He occasionally edits academic writing and does book reviews. Currently, he is working on a short story collection.