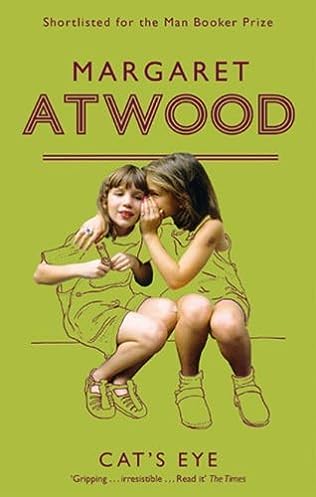 Margaret Atwood’s Cat’s Eye was shortlisted for the Booker prize in 1989. I haven’t read The Remains of the Day, the book that won, but it doesn’t matter. Cat’s Eye was robbed. Every sentence in the novel’s 498 pages serves the whole beating heart of it. No word is superfluous. Each one is a mini portal, transporting us and the main character, Elaine, back into memories without warning, exactly as Atwood intended. In Elaine’s words, on the very first page, “I began to think of time as having a shape, something you could see, like a series of liquid transparencies, one laid on top of another. You don’t look back along time but down through it, like water. Sometimes this comes to the surface, sometimes that, sometimes nothing. Nothing goes away.” On every level, Cat’s Eye is a homage to memory and when we finish reading it and breathe out slowly, we can’t say Atwood didn’t warn us.

Often the sensory details Elaine relays are so specific and sharp, she doesn’t need to prop them up with other words. She offers them in lists. Such as on page 10: “I’ve started to chew my fingers again. There’s blood, a taste I remember. It tastes of orange popsicles, penny gumballs, red licorice, gnawed hair, dirty ice.” And page 49: “the old Jewish delis are disappearing, replaced by Chinese emporia, wicker furniture, cutwork tablecloths, bamboo wind chimes.” And again on page 348L “This is a place that serves nothing but chicken, ‘broasted,’ as it says on the sign. Chicken and dipping sauce, and coleslaw and white buns, and one flavour of ice cream: Burgundy Cherry, which is a striking shade of purple.” Her descriptions of the mundane are specific and original enough to feel universal. They teleport us in an instant.

Take, for example, on page 133, when Elaine narrates, “the air is saturated with the stink of perfumes at war.” Or on page 457, when she is recreating her brother’s last moments and imagines, “two seats over, a fat bald-headed man is snoring with his mouth open, releasing an invisible cloud of halitosis.” Atwood throws us into the story viscerally, then keeps us there emotionally.

We care for Elaine. We know about her. We remember things she herself has forgotten. The memories still exist somewhere, hovering. Nothing goes away. In the beginning, by painting objects from her past, Elaine uses her artwork as a doorway to remembering. On page 476, the gallery owner attaches grandiose descriptions to Elaine’s pieces like “early forays by Risley into the realm of female symbolism and the charismatic nature of domestic objects.” “In other words,” says Elaine, “the toaster, the coffee percolator, my mother’s wringer washer.”

Despite her flippancy, she knows they are not just objects. She knows there is significance in the glass jar, “with a bouquet of nightshade rising out of it like smoke, like the darkness from a genie’s bottle” where “scarcely visible, far back in the dense tangle of the glossy leaves, are the eyes of cats” (395). The nightshade and the cat’s eyes and the tangled leaves and rippled water are recurring images. When Elaine tries to remember her ninth birthday, she closes her eyes. She waits for pictures:

At first there’s nothing, just a receding darkness, like a tunnel. But after a while something begins to form: a thicket of dark-green leaves with purple blossoms, dark purple, a sad rich colour, and clusters of red berries, translucent as water. The vines are intergrown, so tangled over the other plants they’re like a hedge. A smell of loam and another, pungent scent rises from among the leaves, a smell of old things; dense and heavy, forgotten. There’s no wind but the leaves are in motion, there’s a ripple, as of unseen cats, or as if the leaves are moving by themselves. Nightshade, I think…. I can tell it’s the wrong memory. But the flowers, the smell, the movement of the leaves persist, rich, mesmerizing, desolating, infused with grief (127)

We readers know there was nightshade down in the ravine where Cordelia threw Elaine’s hat. We know Elaine was gripping her cat’s eye marble in her pocket like a talisman, when she descended the path to the ravine and fell into the icy water and almost died. The images stay with her- berries, a ripple of water, unseen cats; and the scents- the smell of loam, of old things; and the feelings too- mesmerizing, desolating, infused with grief. But the why, the narrative arc, the cruelty of her “best friend” Cordelia stays buried. And because it stays buried and festers and grows roots, it influences the person Elaine grows up to be.

The first mention of nightshade is on page 89 when Cordelia, Elaine, Grace and Carol pick and arrange the berries on burdock leaves. “Cordelia says we have to wash our hands really well because of the deadly nightshade berries; we have to wash off the poisonous juice. She says one drop could turn you into a zombie.” Years later, the roles reverse. Elaine confesses to Cordelia that she is a vampire, frightening Cordelia, filling Elaine with the power of knowing that she can scare Cordelia. When Elaine is a grown woman, about to go to her own art exhibit, she says, “I’m not afraid of seeing Cordelia. I’m afraid of being Cordelia. Because in some way we changed places, and I’ve forgotten when.”

So much of Elaine and Cordelia’s relationship is based on fear. Even if Elaine manages to tip the scale in her favor later in life, she can’t outrun the earlier hurt. She can deliberately forget facts but she cannot outrun the images, scents and emotions that have burrowed into her. When Cordelia is reminiscing about the hole she dug in her backyard, the hole she trapped Elaine in, an episode Elaine has deliberately forgotten, Elaine is still hit by the heart of that memory, the feeling behind it:

A wave of blood goes up to my head, my stomach shrinks together, as if something dangerous has just missed hitting me. It’s as if I’ve been caught stealing, or telling a lie; or as if I’ve heard other people talking about me, saying bad things about me, behind my back. There’s the same flush of shame, of guilt and terror, and of cold disgust with myself. But I don’t know where these feelings have come from, what I’ve done. I don’t want to know. Whatever it is, it’s nothing I need or want. I want to be here, in Tuesday, in May, sitting in the red-topped booth at Sunnysides, watching Cordelia as she delicately slurps the last of her milkshake up through the straws. She’s noticed nothing. (299)

Elaine’s “memory is tremulous, like water breathed on.” The full weight of facts, the why

behind the most painful ones, the half-dead and haunting ones, doesn’t come crashing back until Elaine is older and taking care of her mother. The two of them descend to the cellar to clean out her mother’s steamer trunk, a physical representation of unpacking memories and that’s when Elaine finds her old talisman, the cat’s eye marble (465). “I look into it,” she says. “And see my life entire” (468).

“The past isn’t quaint while you’re in it,” says Elaine. “Only at a safe distance, later, when you can see it as decor, not as the shape your life’s been squeezed into” (428). At first, Elaine’s artwork is a way for her to remember. She conjures images of the coffee percolator, the Virgin Mary, Mrs. Smeath, whom she hates and can’t remember why. But eventually, when she has gained enough distance to see the past as decor, not as the shape her life was squeezed into, after she holds her cat’s eye marble and sees her life entire, her art grows wings. Her paintings become a way to reshape her narrative and find peace.

She paints the Three Muses, Mrs. Feinstein, Miss Stuart and Mr. Banerji, adults who were kind to her. “To them I was incidental, their kindness to me casual and minor; I’m sure they didn’t give it a second thought, or have any idea what it meant. But why shouldn’t I reward them, if I feel like it?” And she paints her brother, falling through the sky, holding a child’s wooden sword. The gallery owner “thinks it’s a statement about men, and the juvenile nature of war,” but Elaine says it’s “the kind of thing we do, to assuage pain,” (480).

Even her paintings of Mrs. Smeath take on a new meaning toward the end of the novel. She pities Mrs. Smeath, a defeated old woman with the eyes “of someone for whom God was a sadistic old man.” Elaine admits she went for vengeance at first, painting “self-righteous eyes, piggy and smug inside their wire frames,” but now she realizes “an eye for an eye leads only to more blindness” (477). There is catharsis in that.

Using paintings to represent and reshape a life sounds like an easy, stale, narrative ploy but in Atwood’s hands, with her cutting language and precise imagery, there is nothing expected about it.

One of the last paintings Elaine describes brings us back to the very first paragraph of the novel: “Time is not a line but a dimension, like the dimensions of space. If you can bend space you can bend time also, and if you knew enough and could move faster than light you could travel backwards in time and exist in two places at once,” (3). This painting, which bends space and time, is called “Cat’s Eye.”

It’s a self-portrait, of sorts. My head is in the right foreground, though it’s shown only from the middle of the nose up… Behind my half-head, in the centre of the picture, in the empty sky, a pier-glass is hanging… In it, a section of the back of my head is visible; but the hair is different, younger. At a distance, and condensed by the curved space of the mirror, there are three small figures, dressed in the winter clothing of the girls forty years ago. They walk forward, their faces shadowed, against a field of snow (481).

Elaine has always existed in two places because a part of her got stuck down there, in the ravine, and now, finally, that cruelty is in her rearview mirror, condensed in curved space. It will always be there, walking forward, shadowed, against a field of snow. It shaped who Elaine is and nothing goes away.

About the reviewer: C.C. Bernstein is a fiction MFA student in NYU’s low-residency Paris program. She lives in London with her husband and their dog, Bean. She has a children’s book coming out this fall and is working on her first novel. Follow her Insta adventures @ccbernstein.