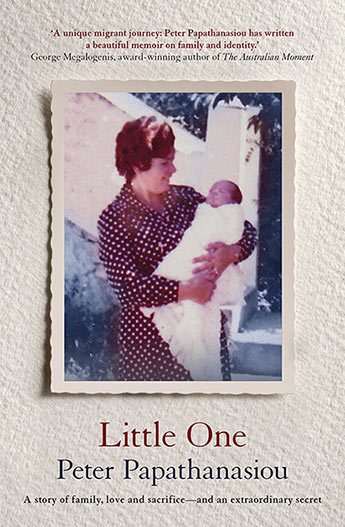 There is a great warmth and sincerity embedded within this memoir, mixed in with gentle humour, discussions of complex research on genetics, birth, death, siblings, parents, family, Greek culture, love. The genesis of the story arises from a secret, one of the biggest secrets a person can have revealed to them, that of their true origins. The book begins with the revelation of this secret, that the author was in fact adopted as a baby and his biological parents are the brother and sister-in-law of his (adoptive) mother. As this is included in the back cover blurb, I am not spoiling the story. It is what Peter Papathanasiou does with this new knowledge, acquired at the age of twenty-five when his mother tells him, that makes the memoir such a valuable narrative, not only to enjoy as a story, but with which to think through the vital issues of life.

Late discovery adoptee memoirs—written by those adoptees told of their origins when adults—make up a small group within the large body of life writing that is available to readers. Some prominent recent examples include Paper Shadows: A Chinatown Childhood (2000) by Wayson Choy, Sandy McCutcheon’s The Magician’s Son: A Search for Identity (2005), and Judith Lucy’s The Lucy Family Alphabet (2008). They of course sit as a subgroup within the larger category of adoptee memoir, which contains such well known titles as Robert Dessaix’s A Mother’s Disgrace (1994) and Jeanette Winterson’s Why Be Happy When You Could Be Normal? (2011). They are all essentially life stories of how families come to be made through adoption, with all of the variations that would be expected through time, place, culture, class, and socio-political status.

Little One is somewhat different from many of these memoirs because of how his adoption occurred within the family, after his parents Bill (Vasilios) and Elizabeth tried for many years without success to have children. Both migrants, they married in 1956 in Australia and adopted Peter in 1974 from Elizabeth’s birthplace, Florina, in Greece; after miscarriages and an unsuccessful attempt to adopt through a Greek orphanage, Elizabeth’s brother Savvas offers, with his wife Anna, to have a baby for her and Bill. This incredibly generous offer comes against a background of them having two sons themselves, the elder of whom is described as ‘slow’ possibly because of a childhood illness or accident, and a suggestion that there is a fertility problem running through Elizabeth’s family.

The author alternates the story of his parents’ coming to parenthood—along with some historical background of their origins and culture—with his own narrative of doctoral research in genetics, struggle to obtain funding for his postdoctoral work, and his relationship with, and eventual marriage to, Jayne. Eventually, Papathanasiou not only leaves academia, despite receiving a five year research fellowship after his prize-winning doctoral thesis, but a career in scientific research altogether. The pressure and competitiveness of the life in the United States during his fellowship put a huge strain on his health, leading to him suffering burnout. For his remaining time in the States, he enrolled in a writing course in New York, picking up on a long-term desire to write that began in childhood. Eventually, writing becomes his great creative passion as well as a means to earn a living, and he writes every day.

Intermingled with these stories are those involving his meeting his biological family. His biological parents die before he makes his first visit to Florina in 2003, but he begins to develop a relationship with his brothers, Billy and Georgios, who are twelve and ten years older than him, respectively. Their relationship is one of love and frustration, as the younger brother must look after his older sibling, and take responsibility for him: ‘my greatest love and most painful thorn’ is how Georgios describes him. Papathanasiou writes about the family history of his (adoptive) mother, her siblings and the cultural milieu of the past, both in Greece in her tiny village and in Canberra as a married but childless woman.

There are two aspects of this memoir that are particularly interesting to adoptees and parents. One is the revelation of the author’s adoptive status, and the other is the effect on the biological parents of ‘giving away’ their baby. The first shows a caring and sensitive woman trying to give the information she knows her son needs without distressing him too much, and also feeling guilty because it has taken so long to do this (‘keeping this from you for twenty-five years has made me grey before my time’); the reason for the delay was a mixture of shame at being infertile and the time never being quite right. Her son writes of his appreciation of the difficulty of telling him; when he goes to see his father afterwards, in his beloved shed, a hug and a smile is what passes between them. This seems representative of the two different personalities of his parents, but also of past gender and cultural expectations.

Even though Savvas and Anna made the offer to Elizabeth to have a baby for her and Bill, it was not an easy decision to see through to its completion. Anna hands Panagiotis (Peter), as he comes to be named, to Elizabeth as soon as she arrives back in Florina, but the eventual separation when she leaves with him to go home to Australia is tear-drenched. Later, in 2003, when the author is in Florina with his mother, there is time for contemplation about his adoption and its long-term implications both for himself and for others. His mother tells him that giving their baby away ‘was also harder on Savvas and Anna than I think anyone realised’ except for her wise old father who had said to her:

What if he offers you a child and then changes his mind? Or one day asks for the child back? Or Anna does those things? You’ll have all sorts of trouble. And what will you one day say to the child about all this? This is a child we’re talking about here, not a car or animal or pet. So many things could happen. You’re playing with fire.

He continues by saying that ‘the potential consequences are immense and you’re not in control’. This is a profound section of the memoir that speaks clearly to me as an adopted person about the need for long-term thinking. But, as Papathanasiou responds to his mother, everyone had regrets, and ‘these were all difficult situations, and none of us are bad people’. I think Elizabeth’s father’s words are important for everyone in the adoption circle to remember, or indeed, in any family formation circle, regardless of the outcome.

There is so much contained in this memoir it is difficult to capture it all in a review. Papathanasiou’s writing is fluent, his skills at creating dialogue well honed, and there are some beautiful descriptive passages of family events (including the births of his and Jayne’s children and being a parent) and the natural world. The last illness and death of his father Bill is exquisitely and sensitively told. I feel that his thoughtful and perceptive descriptions and interpretations of his new knowledge of origins and all that it means is of immense value to other adoptees and parents, and everyone else interested in the cycle of life.

About the reviewer: Sue Bond is a writer and reviewer living in Brisbane.