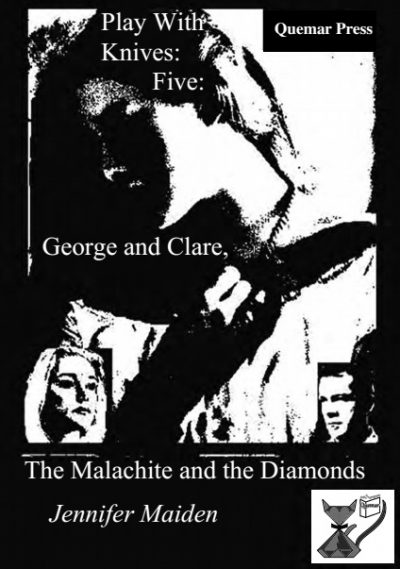 It seems fitting that Jennifer Maiden should complete the Play With Knives series with a story that is written in a multigenred style. Play With Knives: Five is the most ambitious novel in what is already an ambitious series, taking protagonists George and Clare from their Western Sydney home to the Dobrovisky district of Russia where they have gone with their young child, Corbyn, to rescue a young arms dealer Quentin from her dangerous husband Schmidt on the request of Quentin’s desperate mother. The story is told in alternating chapters of prose and poetry, with tense changing from third person to first, and from omniscient to George’s point. It may sound as though these shifts in time, place, and narrative structure would be choppy and hard to read, but Play With Knives: Five reads smoothly, driven by the story of Quentin’s rescue, even while allowing for a multiplicity of voices, structures, locations, and styles to co-exist– not only between characters and settings but within characters and settings. In spite of the complexity inherent in the topic, the political context, the multiple styles and tenses, the book progresses along an easy-to-read linear narrative that brings together threads from all of the books in the series, including the crime Clare committed as a child, which saw her growing up in prison, George and Clare’s changing relationship, and the real world events that Maiden reflects in the work with fascinating progression.

It is possible to read book five on its own, as some context and conversational backstory is provided, but the book does presuppose some knowledge of the characters and their situations and works much better to my mind as the finale to a quintet. Taken as a series, Play With Knives becomes an extensive and long-running exploration of such themes as the nature of evil, retribution and goodness, the nature of love, the relationship between the personal and the political, and a meditation on motherhood and grief.

As you’d expect from a master wordsmith/poet like Maiden, the writing thoughout the series is evocative and powerful, with striking metaphors that seem to move effortlessly between philosophy, physical description, and emotional transition:

She gazed in his eyes too long: a length of time an animal would have categorised as aggression, but her uncertainties fluxed in her fixed expression, its wryness seductive with mutuality, its mutability like a kaleidoscope made from new night air (79)

Throughout the series, each book remains extraordinarily topical, picking up on world events in a way that reflects Maiden’s keen observations of US politics in particular but also political machinations between the US, UK, Russia, and of course Australia, with enough subtleties to warrant multiple re-readings to pick up on all the local puns, the innuendo, and the deft way in which the literary and the political are interwoven. This is a distinctive Maiden trademark and it is done with great elegance in Play With Knives: Five, which has also taken on some key technological advancements, moving from computer hacking in Play With Knives: Four, to quantum diamonds, promising candidates for the building blocks of quantum computers. In Play With Knives: Five Schmidt sells these “secret” diamonds which are impregnated with silicon, one of the more promising materials in the race for quantum supremacy, and which, in the novel, form the desired object on which the thriller scaffold is built.  It is fitting that Maiden has used quantum diamonds, as the work itself functions in a somewhat quantum way with the entanglement between the characters – especially George and Clare, whose shared history and deep trust enable them to work together in perfect sync, even with a rather well-behaved baby in tow:

So the separation swirled sharp like sleet inside them,
between them,
before them,
like sleet’s pain-breaths on Big Afansyevskiy Lane. (90)

There is also an inherent indeterminacy or multiplicity in the way the story unfolds, so that it is both a domestic story, with sumptuously described meals, personal care/tenderness, tea taking, and small acts of kindness that include buying teddies and dolls and supportive talk between friends, as well as being a story of international espionage involving great acts of big evil: arms dealing, drug dealing, government complicity, murder, and looming war. Maiden’s exploration is topical and sometimes chillingly prescient, as has been played out over the past twenty-nine or so years since George and Clare first made an appearance in the original Play with Knives novel. That she is able to work between and through this uncertainty is partly what makes these works so rich, as they build to a conclusion which in itself remains open.  As with other book in the series, Play With Knives: Five has many literary references from Coleridge’s Kubla Khan which is woven through the book, Tolstoy’s War and Peace, Swinburne’s The Garden of Proserpine, de Sade’s Juliette, and Proust’s Remembrance of Things Past and others, that add depth to the story.

The series doesn’t seem to date – something that is always a risk when building stories around current events. Perhaps that’s because the stories all pivot around George and Clare, and their own personal, and timeless, attraction for one another and the way in which they seem to work through the philosophical issues of guilt and redemption, and also because the work has continued to transition through political machinations, allowing the very mutable nature of global politics to become part of the fabric of the work. As a five part series, Maiden’s Play With Knives is masterful in the way it manages to explore so many different themes and pull them together into a cohesive aesthetic unit. The final book in the series The Malachite and the Diamond concludes the series in a way that is both satisfying and yet resists simplification. The questions and complexity remains intact, and the story open for the reader to make and remake through multiple readings. The transitions between poetry and prose work particularly well in this instance and make for a beautiful, rich, disturbing at times, and ultimately powerful read.