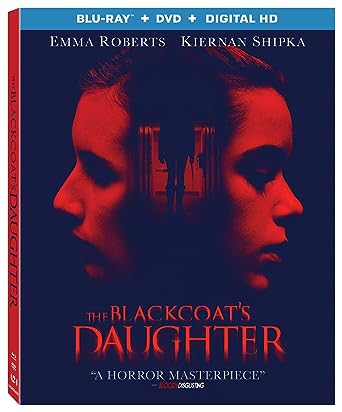 Are our collective fears changing? Evolving? In the 90s, Scream—with its self-awareness and meta-humor—gave a much-needed rebirth to the slasher genre, and a craze of twisty teen films with high body counts followed. In the 2000s, Saw bet all its chips on hyper-violence, and the term “torture porn” was thrust upon our culture. Now, we are witnessing perhaps the most substantial change to the horror formula to date and the rise of a new sub-genre. These modern films focus far less on gratuitous violence and concern themselves more with a journey that leads us to tragic ends. This new crop of horror is more cerebral, less conventional—films which have been called “art house horror”—even “post-horror.”

At the forefront of this movement is award-winning production studio A24, which released such films as The Witch and It Comes at Night. Unfortunately overlooked in this pack is The Blackcoat’s Daughter, written and directed by Osgood Perkins (son of Psycho’s Anthony Perkins). Fantastically executed in almost every regard, The Blackcoat’s Daughter is a supremely suspenseful gem.

Despite being Perkins’s directorial debut, the mood setting, storytelling, and performances he compels from his cast are masterful. Set primarily over winter break at a girls’ boarding school, Perkins and cinematographer Julie Kirkwood paint a gorgeous, abandoned world of ice and snow and shadows. Each scene is beautifully framed, most are dimly and fluorescently lit. Darkness looms over every brick. The atmosphere of the film is unsettling from its very first frame.

Further enhancing that tone is the film’s score by Elvis Perkins (Osgood’s brother). The reliance on strings and discordant, frantic melodies breathes terror. It’s a unique and unsettling score—one of the best of the modern horror era.

What hooked me, however, was the expert storytelling; the film excels at building and unraveling mystery. The rise in action is admittedly slow—not to be confused with boring. Menace lurks behind every corner, and often in plain sight. The film’s tension and uncertainty are addictive drugs. There’s a compelling drip of detail following two young, worried women stuck in an otherwise empty dormitory and a third who hitches a ride with a kind stranger. The film’s unfurling of its mysteries and merging of its story arcs is beautiful and not without significant and satisfying surprises. Perkins’s skills as a storyteller keeps us in our seats, fully captivated, and needing to see how this all plays out. And The Blackcoat’s Daughter’s third act does not disappoint. Its conclusion is intense, brutal—the kind of payout horror fans should expect.

The acting, across the board, is fantastic. Scream queen Emma Roberts, Dexter’s James Remar, and relative newcomer Lucy Boynton each deliver convincing performances as their troubled, broken characters. But for all the great acting found in the picture, the real highlight is Mad Men’s Kiernan Shipka in the lead. Her nuanced yet intense performance as shy Kat is something to behold: off-center, menacing. Perhaps no one else could make the line, “You smell pretty,” give one such intense shudders. Shipka’s efforts here should be considered among the all-time great performances of the genre.

Like A24’s more commercially successful The Witch, The Blackcoat’s Daughter is artistic horror of the highest quality: a haunting film that is equal parts beautiful and brutal. The mesmerizing film builds and builds towards a satisfying and sinister conclusion that will likely lead to more than one sleepless night.

The Blackcoat’s Daughter is currently available on Blu-ray and DVD and for streaming through Amazon Prime.

About the reviewer: Brian Burmeister teaches communication at Iowa State University. He is a regular contributor at Cleaver Magazine, and his writing has been nominated for the Pushcart Prize and Best of the Net. He can be followed on Twitter: @bdburmeister.