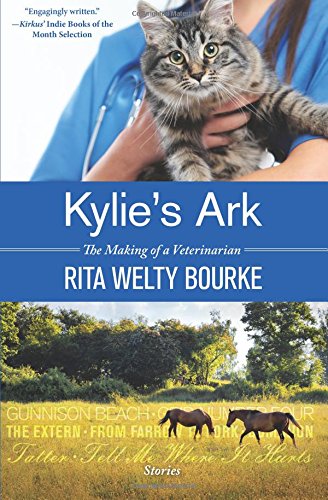 “I want to go out into the world, not retreat from it. I want to live my life focused on the work I have chosen, not on the eternity that might come after. The last line of the Veterinarian’s Oath, to ‘accept as a lifelong obligation the continual improvement of my professional knowledge and competence,’ would not be possible here (Amish country).”

In the short Prologue of Kylie’s Ark, author Rita Welty Bourke explains that she has written down Dr. Kylie Wheeler’s stories as the vet gave them to her, trying to be faithful to her voice. I don’t know why Wheeler didn’t write them down herself, but perhaps a clue appears when she comments in the book that she had loved James Herriot’s charming books about his rural veterinary practice. Scotland, wasn’t it? He’s a tough act to follow.

It’s invariably true that Herriot’s animal stories ended happily, as she notes. Her stories, well, invariably do not. They resist a chipper ending and, indeed, conspire to break her heart. Being a veterinary student certainly is no picnic for her, but when she’s finally graduated and chosen to set up her practice, the life still is no picnic. Not that Wheeler wishes it was! Her last words confess that she’ll look for another line of work if she ever stops struggling to save suffering animals in her care.

Her seven stories begin in the early months of her adventures as a veterinary student. Using very little derogatory terminology, her reference to herself as a Park Service Bitch stands out, which is what some angry people call those in her position who are merely doing their federal job of protecting endangered species, such as piping plovers and silver foxes.

“Know that the same spark of life that is within you,
is within all of our animal friends,
the desire to live is the same within all of us…”
–Rai Aten, Secret of the Sands (from opening pages)

Wheeler probably knows plenty of happy stories, I hope, but these traumatic, challenging ones are the ones she remembered, the ones that held the most meaning for her and, she hopes, for her readers.

Much more of her practice centers on euthanizing all kinds of animals and not always the sickest or most hopeless cases. Besides the messy, smelly, difficult work of vaccinating livestock at Texas prisons and, paradoxically, being told to leave a dying horse alone in Amish country, Wheeler must put to sleep patients she has often spent days and weeks trying to save.. Kittens rescued from a burned-up apartment,a beloved cat who tumor is probably cancerous. But sometimes she can save them with the help of a loving owner or surgical student.

Wheeler makes me fully aware of the joys and sorrows of her chosen life’s work and I fell in love with her gentle, slightly frantic heart as she herself falls for a colleague who would become her husband. They are separated for long, lonely stretches of time, but he supports her when he can.

I delight in animals as well and hopefully will be treated to living with a therapy cat soon I may name Kizmet. This book doesn’t tempt me in becoming a veterinarian, but those in training to do so will very much enjoy the book. Wheeler has a keen interest in scientific research, which she sometimes shares with us, and the future of veterinary science bodes well with doctors such as her in practice. One of her professors plays a role in her final story.

So Kylie’s Ark may not remind us of the Biblical story of Noah and the ark, nor of Herriot’s hilarious, heartwarming stories, but that’s not a bad thing. It’s real life and life can be awfully messy. That’s why life can be so rewarding, don’t you think?

About the reviewer: Jan Peregrine has tried her hand at self-publishing and has about seven she recommends on Amazon or Audible. She recently finished writing a romantic/comedic trilogy called Dr. Freudine Is In: The Story Begins, which can be read for free at www.inkitt.com.