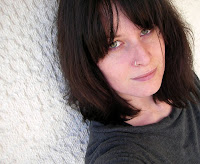 You’ve said in the opening of The Book that it was inspired by a journal kept by your own parents. How did you come across that journal – did they give it to you?

Yes, they gave it to me. Though the motivations for keeping it were very different to The Book. They also stopped writing in it once I started school.

At what point did you decide to use the notion of a journal as inspiration for a story? Tell me how it all came about.

To be honest, it was a bit of a light bulb moment. Actually, that’s a bit of a lie, I’d been thinking about ways in which I could use the entries in it for quite some time, but I could never think of anything that was more original than just a book written like a journal. It’s been done to death and I really wanted to twist it into something more appealing. But then one day, it just hit me. I was working. I heard a Eurhythmics song on web radio and wham. Idea! I took advantage of the Eurhythmics song in the book, too.

Talk to me about the character of Bonnie – she’s got quite a unique voice. Did you spend time listening to young children to get the sound right, or did it come naturally?

No, it just ‘happened’. I was a little possessed by her once I started writing. I wrote the first draft in three days. I just couldn’t stop. I know it sounds clichéd, but I seriously feel like this book was meant to be written. Because I know for a fact that it wasn’t me BEING Bonnie when I was writing. I WAS Bonnie. Do you believe in ghosts? After writing this book, I do.

Each character has his or her own voice, especially Bonnie’s parents Penny and John. Were there any characters that you really struggled with?

Nope. Not at all. It’s the easiest book I’ve ever written. Which is quite interesting, because everybody I spoke to about it said it would be a huge challenge trying to write like a kid. I didn’t find it a challenge at all. Perhaps I’ve never grown up. Or perhaps the answer to your last question has some merit.

There are a few stories that interlace with Bonnie’s including Mary’s – which we only get hints of. Do you think you’ll revisit those unwritten stories?
I doubt it. The story feels complete to me. I haven’t had any urges to revisit them. But you never know. Maybe another song might spark something …

Tell me about the video – the music was your mother’s right?

Yes, it was my mother’s. But I’ve digitally altered it to fit the trailer. I know it would be interesting to say it was symbolic in some way. Songs usually are for me, especially in relation to the stories I write, but this was chosen merely because it had the right sound and feel for the book.

You’ve said that all of your novels begin as songs – were there songs for this one?

Yes. What I love about the songs in this book is how clever Bonnie is at dissecting the lyrics, even though her interpretations aren’t correct, I think one might sit back and marvel at her logic.

Tell me a little about the new novel you’re working on.

I don’t want to give away too much right now, but I can tell you it’s about a young woman named Mia who chooses to fight fat with white ladies. Hint: don’t think literally.