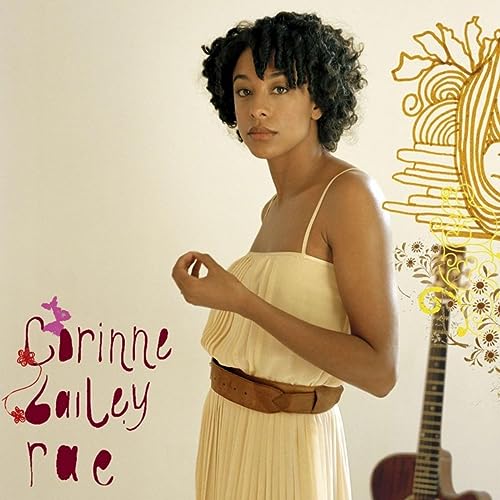 “Just like a star across my sky, just like an angel off the page, you have appeared to my life,” sings Corinne Bailey Rae. Corinne Bailey Rae has a girlish, sleepy-sounding voice, but her diction is clear and she is easy to listen to; and she reminds me a little of both Erykah Badu and Norah Jones. The songs on Rae’s self-titled debut album—Corinne Bailey Rae—were written by Rae with collaborators: and they include Rod Bowkett, Steve Chrisanthou, John Beck, Pam Sheyne, Paul Herman, Steve Bush, Teitur Lassen, Andrew Hale, Marc Nelkin, Tom Danvers, and Steve Brown. In the collection’s first song, “Like A Star,” Rae sings it’s an “honour to love you, /still I wonder why it is /I don’t argue like this with anyone but you.” That’s a thought to wake anyone up.

“Enchantment” continues the theme of the first song, that of a unique and overwhelming love, love as romance and confusion, and Rae sings that she doesn’t “know how I fell under his spell.”

Friendship, encouragement, and simple pleasures are featured in the light, uptempo “Put Your Records On,” whereas “Till It Happens to You” is a confessional ballad of a heavier mood, with bass guitar and piano, about love’s changes.

In “Trouble Sleeping” Rae is cultivating a resistance to falling in love, while “Call Me When You Get This” is affectionate, imaginative, sweet—and yet it’s hard to know if it’s a song of love or loneliness. In “Call Me” Rae sings, “”What’s it really like to be loved?” and “I have often wondered who, who could love you the way I do?” and “baby, if you’re still awake, call me when you get this.” The ballad “Choux Pastry Heart” is definitely an end-of-romance song, and it’s a bit quirky and whimsical and sad.

Corinne Bailey Rae’s songs have an infectious romanticism. One recognizes the romanticism—the dreamy lack of realism—and still feels seduced by Rae’s hopeful emotions and evocative situations. Rae gives an intense performance—I thought of Alicia Keys—in “Breathless,” a song that asks, Can friends be lovers? A neighborhood memory of family, friends, summer fun, and present infatuation is the subject of “I’d Like To,” a song with a percussive beat. “Butterfly” is a tribute to a mother’s guidance and joy. In the Rae collection’s last song, “Seasons Change,” Corinne Bailey Rae sings, “life is a waiting game, don’t you know that? /Peace must be nurtured” and “You’ll get yours when the seasons change.”

About the reviewer: Daniel Garrett has written about music for AllAboutJazz.com, Hyphen, IdentityTheory.com, Option, and PopMatters.com, including commentary on Sade, the Afghan Whigs, Tupac Shakur, Kitchens of Distinction, Matthew Sweet, and Annie Lennox; and his commentaries on Lizz Wright, Sinead O’Connor and Al Green have appeared on the web pages of The Compulsive Reader. Daniel Garrett has also written about art, books, business, film, and politics, and his work has appeared in The African, American Book Review, Art & Antiques, The Audubon Activist, Cinetext.Philo, Film International, Offscreen, Rain Taxi, The Review of Contemporary Fiction, and World Literature Today.