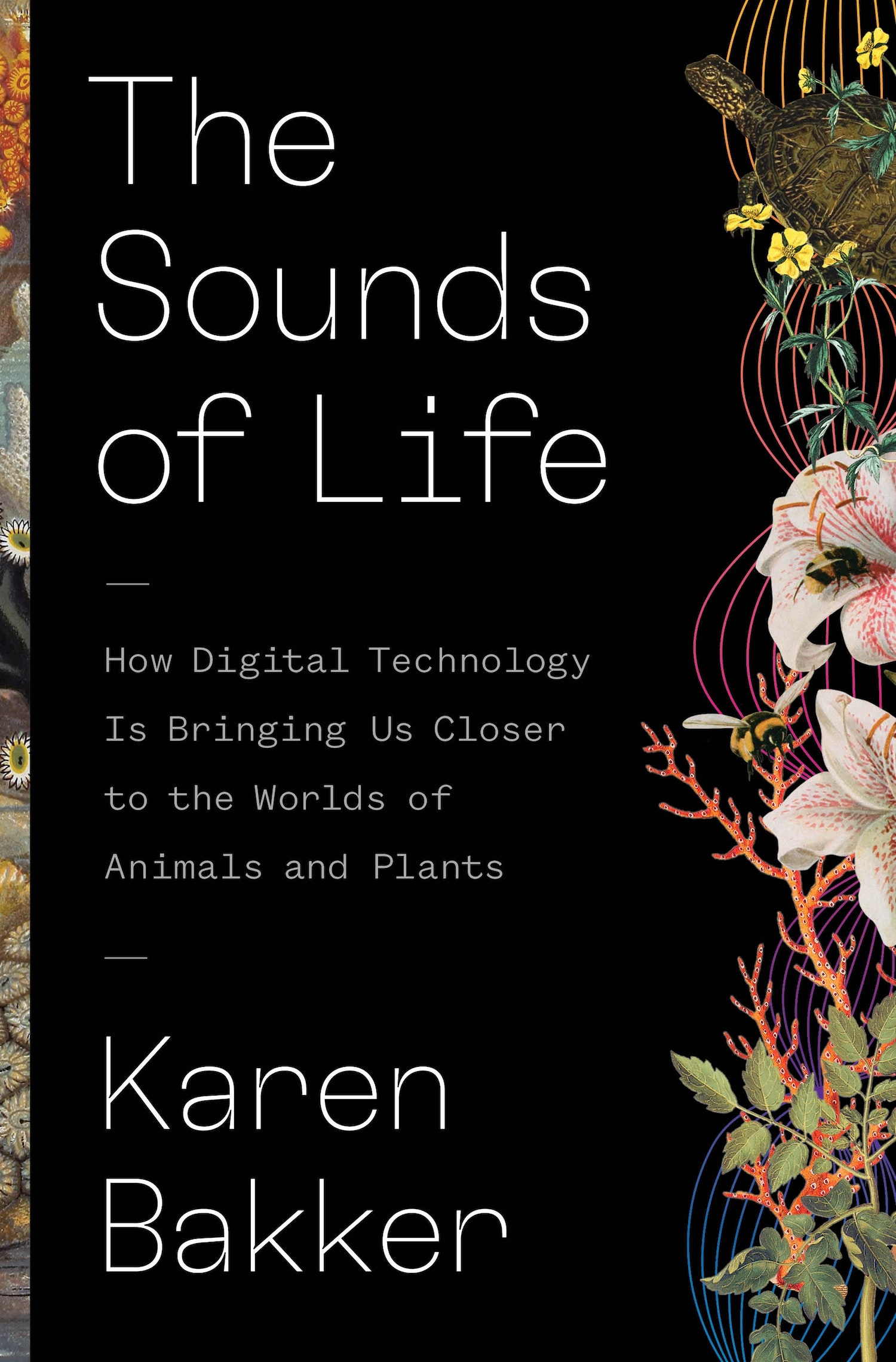 Impeccably written, soundly researched, and utterly fascinating, Karen Bakker’s The Sounds of Life is a popular science book which establishes the case for interspecies and intraspecies communications using breakthrough advances in bioacoustics, artificial intelligence, and digital tools. Recently, scientists have begun using digital devices across a vast array of ecosystems, giving rise to Bakker’s apt observation that: “The earth is in continuous conversation.” Within these technologies, Bakker discusses how to listen to and decipher the intricate communications of plants and animals. As she notes, much of this communication happens at frequencies that we mere humans simply cannot hear—or in our human vanity choose not to hear. Yet technology, as the author points out, is now allowing us to listen, if we will only do so.

Between and around the book’s hard science, the author wraps accessible and warmly told human narratives such as the tale of the dying man who on his last sea trip first realized whales communicated with each other. Thus, The Sounds of Life is filled with a certain kind of wild, brilliant charm that makes it very readable for the scientific and the nonscientific minded alike. Subtitled “How Digital Technology is Bringing Us Closer to the Worlds of Animals and Plant,” this is a book that should shake human hubris to its core and challenge the notion we alone can talk. As the introduction notes:

The desire to recover a lost ability to communicate with other species stirs up powerful feelings: from fierce skepticism to a yearning for reconnection. The stories told in this book explore this tension. By remembering that sound is more than digital data, I seek to hold multiple truths simultaneously: sound as data and information, sound as music and meaning, sound as language and the true tongue of places and nonhuman peoples. Listening is both a scientific practice and a form of witnessing that acknowledges our presence as guests on this planet and embraces our kinship with other species across the Tree of Life.

The landscape Bakker crosses in her wondrous book about how plants and animals communicate is awe inspiring at the very least. She weaves the materials with a storytellers’ natural talent and cadence, using rich and descriptive language, crisp sentences, and clear examples—and more than the occasional metaphor. Within her book, she reveals evidence which establishes such things as dolphins call each other by individual names, flowers respond to the sound of bees by flooding their blooms with nectar, and turtle embryos, still inside the egg, coordinate their birth through sound. And that is just the tip of the iceberg, so to speak.

Though scientific at its core, and offering clear explanations of bioacoustics, ecoacoustics, infrasonic pulse, and other similar concepts, the book is also poetic, both in words, images, and themes. Bakker often draws from the stories of aboriginal people regarding plants, animals, and human communications, granting such tales value beyond myth. One theme perhaps dominates—the need for humans to be quiet and listen to the sounds of life, and from that new kind of hearing, we might begin a new, better relationship with our earthly world.

The Sounds of Life examines whale communications in chapter two, “The Singing Ocean,” in an eloquent discussion of whale songs, their social culture, intelligence, and more. Bakker writes: “The science of bioacoustics provides a novel means of exploring what the Iῆupiat and other traditional whaling cultures have long been saying: creatures other than humans are capable of complex communication and possess rich social behaviors, which are intelligible to humans who choose to pay attention.”

In the next chapter called “Quiet Thunder,” the extraordinary intelligence and communication skills of elephants are the focus—as well as how human encroachment on elephant territory has led to conflicts as people began to farm in traditional elephant habitat. In discussing the farmer-elephant clashes and the attempts of conservationists and scientists to keep elephants from destroying crops, Bakker writes about “honeybee fences.” It turns out, as the Maasai tribes long knew, that elephants are terrified of honeybees because the bees are adept at targeting patches of thin skin on elephant bellies, trunks, ears, and eyes. Using that knowledge, scientists learned to use bee noise to keep elephants from destroying farmlands. When African farmers began to use active beehives to create “honeybee fences,” they were also then able to plant new types of bee-pollinated crops like sunflowers. India and Thailand are also now using beehives as elephant deterrence. This is a practical effect of the wide-ranging potential of this expanding field of knowledge. As Bakker writes: “As they spread around the world, [a] simple invention [the bee fence] is potentially a game changer: a bioacoustics-based device that may enable peaceful human-elephant coexistence.”

In chapter four, “Voice of the Turtle,” the book explores how one woman’s doctoral research refuted the long-held scientific notion that turtles didn’t make noise. Camila Ferrara’s research, complimented by field research conducted by Jacqueline Giles, established turtles not only make noise, they make rather a lot of it, including “clacks, clicks, squawks, hoots, short chirps, long chirps…and pulsating mating songs.” However, many of these varied sounds were “low-frequency, quiet sounds of relatively short duration that only an attentive ear, and a body held in stillness, might pick up.”

Chapter five, “Reef Lullaby,” deals with recent astonishing “evidence of hearing ability in species that do not even possess ears.” This chapter on coral reefs opens with the stark warning that “Climate change is slowly poisoning the oceans. As the seas warm, their waters hold less oxygen, suffocating life [which ultimately] increases ocean acidity….The quietly insidious effects of ocean acidification on corals are less widely known than megafires and sea level rise. But the consequences are no less dire.” Bakker makes an urgent plea on behalf of coral reefs, pointing out that: “The disappearance of corals is a death knell for many other species. Corals are like the rainforests of the marine world: although reefs occupy less than a tenth of a percent of the ocean floor, they support one-third of all known ocean species.”

Acoustic monitoring of reef noise has advantages for scientist studying such reefs, Bakker points out, as recordings of marine soundscapes can serve as a proxy for assessing coral reef health. The full extent of the importance of ocean sounds and coral reefs are further explored in this riveting chapter, including experiments in using sound—“acoustic enrichment experiments”—to help restore the Great Barrier Reef. Combining science with a poetic, mythological concept, Bakker writes:

Perhaps the revelation of coral reefs singing to their young and coral larvae following songs across the sea should not surprise us. Aboriginal songlines—one of the oldest recorded forms of human oral history—travel across both the land and the “sea country” where the Great Barrier Reef lies. Perhaps each species has its own songlines it is singing right now, if only we could hear them.

In chapter six, “Plant Polyphonies,” the book takes a close and fascinating look at this question: “What if we could talk to plants?” In delving deeply into this topic, Bakker notes that the “study of plant bioacoustics, known as phytoacoutics—how plants themselves make and respond to sounds—is a relatively recent still somewhat controversial endeavor.” After detailing some of the recent studies and experiments involving plants and sounds, Bakker observes “There is something wondrous, even enchanting, to discover that floral acoustics act as a guide and a lure for bats, and that plants and bees share intimate conversations. But is this merely an example of nature’s exquisite interconnections, or something more?”

Returning again in this chapter to a common theme, The Sounds of Life delves into the “intersection of botany and anthropology.” Bakker intriguingly asks, “What if Indigenous theories of plant sounds, rather than operating at the level of mere metaphor, are empirically accurate—facts rather than myths?”

Leaving the relatively new scientific field of phytoacoustics, chapter seven looks at “Bat Banter,” which quickly summarizes knowledge of bat acoustics dating back to at least the eighteen century. Then, updating that knowledge, the book notes “Digital bioacoustics has allowed bat researchers to uncover another, even more astounding set of findings: the complex social relationships and cognitive abilities of bats.”

Similarly, in chapter eight, “How to Speak Honeybee,” the book updates research and findings on honeybees, starting with the observation that “The waggle dance of the honeybee (apis mellifera) has been observed since antiquity.” Delightfully, Bakker notes after explaining one experiment, that “bees had revealed themselves to be sentient, and slightly cheeky, beings.”

The last two chapters, “The Internet of Earthlings” and the “Tree of Life,” combine philosophy and science as well as Bakker’s recurring ardent plea for environmental reform and for people to stop—and listen. In the “Internet of Earthlings,” Bakker details how a coalition of scientists are now attempting to mobilize artificial intelligence to “crack the code of interspecies communication with a broad range of animals—from primate to parrots and dolphins to whales.”

The book’s final chapter, “Listening To The Tree Of Life,” explores how bioacoustics-based devices have—and might continue to—demonstrate successes in protecting endangered species. Ultimately, Bakker returns to her prevalent theme in the last line of her marvelous book: “If we open our ears, a world of wonders awaits.”

Ultimately uplifting, and utterly fascination, The Sounds of Life is, simply put, an excellent book.

About the reviewer: Claire Matturro is a former lawyer and college teacher, and the author of eight novels, including four published by HarperCollins. She is an associate editor at The Southern Literary Review, and lives in Florida with her husband and cross-eyed rescued cat. An avid gardener and one-time owner of an organic blueberry farm, she is fascinated by botany.