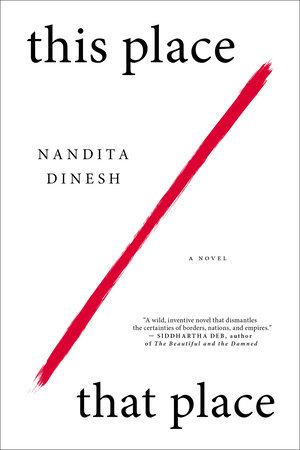 Though Nandita Dinesh’s experimental novel This Place That Place came out during the summer with the Covid-19 pandemic not quite over, and features a protagonist who spends a bulk of her time under curfew, anyone who imagines that the book sets out to map the psychological terrain of life under Covid-19 lockdowns misses the universality of the experiences that are Dinesh’s concern. By her own admission, Dinesh completed the novel before the pandemic began, and it draws on scenes and incidents that this widely traveled writer has observed in locales as diverse as New Mexico, South Africa, Rwanda, Uganda, and Kashmir.

As its title suggests, This Place That Place is about a pair of opposing polities, or geopolitical entities. The protagonist is a resident of the first of the two, and Dinesh poses the question of how someone copes emotionally and psychologically with the daily ordeal of constraints on her movement and activities, and the related question of whether she can feel anything other than resentment and loathing for the occupying force that has crimped her existence. This Place That Place is written in a nonlinear style, with passages of wildly different style, tone, and narrative viewpoint juxtaposed. This takes getting used to, but Dinesh has done something brave in writing a book that joyously defies conventions and shows inventive energy and playful quirkiness from the first page to the last.

The protagonist tells us in detail of her reliance on cigarettes as a means to get through her long hours of confinement. She smokes one per hour, and puts to use time-tested methods of arranging her cigarettes and disposing of the ash, described in painstaking detail. Her habits are so entrenched that she depends on them to keep a handle on time, its passage, and her place within it. Everyone knows how unhealthy smoking is, but, paradoxically, her use of cigarettes according to this routine is so integral a part of her day-to-day life under curfew that to stop smoking, or even to smoke less or alter the routine, would throw off her sense of time and hamper her productivity. It is odd that so destructive and potentially lethal a habit could help a person get by, but this is a story of oppositions and paradoxes.

The publisher bills the novel’s subject as a love reaching across battle lines in the manner of Romeo and Juliet, but themes of occupation and the relationship of the personal to the political are, again, as old as humanity and relevant to the experience of people all over. In a discussion with this writer, Dinesh alluded to many instances of occupation and polarization that she has witnessed in the course of her travels.

“Some of the work’s focus on time, for instance, draws from what I witnessed in Internally Displaced People’s Camps in northern Uganda and from wondering how people living in these conditions move (literally and figuratively) from one moment to another, from one day to another, when there is no end in sight for their waiting,” Dinesh said.

Dinesh herself experienced the traumatizing effects of living under curfew while confined to a house in Kashmir, an ordeal during which it was impossible to know what might happen in the next hour, she said. Other aspects of the novel and its polarities found inspiration in Dinesh’s time in Rwanda, a country that went through the horrors of civil war and genocide in 1994 as much of the world stood by.

“Some of the novel’s explorations of insider/outsider dynamics draws from my time in Rwanda, where, as an outsider theatre practitioner who has never lived through genocide, I was forced to consider what right I had to even try to tell stories from/about it,” Dinesh said.

“There are also nuances of my time in South Africa, certainly, of how history is experienced in a present that is supposed to be ‘better’ and yet, remains so conflicted,” she added, alluding to a nation with extremes of wealth persisting long after the end of apartheid and social tensions that still sometimes flare up into apocalyptic riots and looting.

Still other passages in the book derive from Dinesh’s experiences working with young people incarcerated in juvenile prisons in New Mexico. During this phase of her career, Dinesh says, she spent a good amount of time “wondering how their experience of confinement—in every possible sense—influenced their navigation of the everyday.”

With a novel this boldly experimental, it is hard to get very far in a discussion of influences without Beckett’s name coming up. But that is just one of the names in a diverse stew. Dinesh said that Beckett and others represent some of the less conscious influences here, and other visionaries more directly inspired the themes, tone, and style of This Place That Place.

“In terms of folks that I was consciously thinking about as I wrote, however, there are a few different writers who come to mind. There’s Griselda Gambaro, the Argentine writer, and an important theme that she focuses on in her play Information for Foreigners—how does an outsider/foreigner negotiate the ethics of witnessing, especially when that visitor/guest is called on to witness phenomena that they have no lived experience of?” Dinesh said.

Dinesh also acknowledged the influence of Bertolt Brecht’s Epic Theatre on her writing, and certain themes from that venue, in particular.

“What does it mean to create an aesthetic structure that allows for critical empathy, where the audience/reader is alienated enough to not be taken over by emotional catharsis and yet, where they are invested enough to care about the characters’ conditions?” asked Dinesh.

“The British writer Sarah Kane has always been someone I’ve looked to for inspiration, especially her 4.48 Psychosis and the way in which this free-form play-but-not-a-play challenges its readers to question our assumptions of form. Kenyan scholar and writer Ngugi wa Thiong’o’s musings around Decolonizing the Mind have also been important; in asking myself what it means to write in a way that’s more authentic to who I am, rather than in a way that’s dictated by the hegemonies of market/cultural forces,” Dinesh added.

Yet another influence Dinesh cited is the Argentine writer Manuel Puig, and his 1976 novel Kiss of the Spider Woman, with its use of what Dinesh called “prose-meets-dialogue.”

For all the richness of its many and diverse influences, This Place That Place is a creation entirely Dinesh’s own, one that invites the reader to inhabit opposing identities without concern for conventional narrative and characterization or tidy resolutions. Those who want car chases and melodrama know where to find them. The literary scene could do with more experimentation this fearless.

About the reviewer: Michael Washburn is the author of The Uprooted and Other Stories, When We’re Grownups, and Stranger, Stranger. His short story “Confessions of a Spook” won Causeway Lit’s 2018 fiction contest, and another of his stories, “In the Flyover State,” was named a Distinguished Mystery Story of 2014 by Best American Mystery Stories.