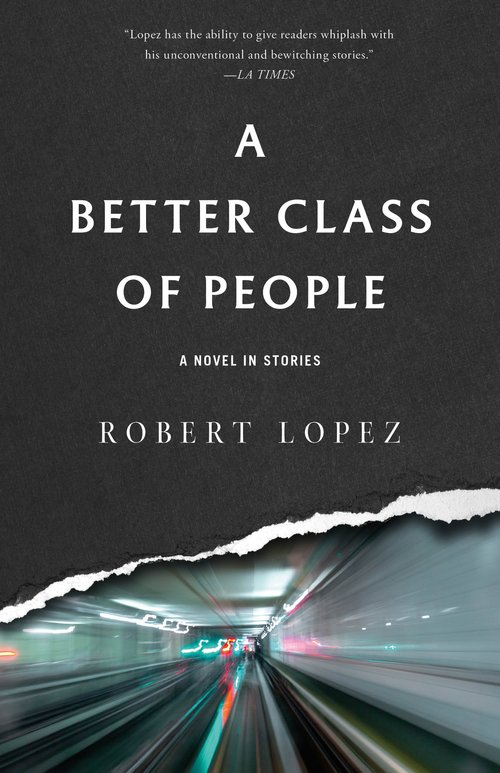 Of necessity, books manifest in a linear fashion: we read Page One before Page Two; Story One is generally read before Story Two. A Better Class of People, however, defies such a reading. The stories circle back on each other and sometimes on themselves, yes, but they also beg the reader to revisit them in a different order to create a new effect upon subsequent readings. And this is a book I wanted to revisit the moment I read its final word.

Every story in the collection is written in first person and in the same voice. The effect: what feels like a string of stream-of-consciousness monologues of a tragic, alienated person— possibly with severe brain injury or perhaps heavily medicated. Or both. A psychologist or neurologist might have a field day with diagnosing his dominant condition, but, to the layperson, he might seem to vacillate between narcissism and potential persecution- and messiah complexes—at one point, he even says, “I might be Jesus on the cross in this scenario”—or any other number of “conditions.” With close reading, however, the reader becomes sympathetic to his trauma, his isolation, and his grief. It’s impossible not to see the symbolism of his desire to connect with Esperanza, “who has been avoiding [him] of late,” woven throughout the book. Aren’t we all searching for a little hope? Though I would never call this a “pandemic book,” there is a certain synchronicity to it coming out at this time when many of us feel forlorn and disheartened.

The interstices between the longer stories are inhabited by what I have come to think of as the “subway interludes.” They are grouped separately in the Table of Contents and include a subway graphic above their titles in the body of the book. These pieces of flash fiction—some published as stand-alone pieces in various literary journals—take the reader on subway rides with our narrator as he interacts (or doesn’t) with strangers in the world outside his head. Some of these stories reveal a certain measure of self-awareness. In “Two Syndromes at Once,” he adopts the first-person plural point of view creating the effect that he is speaking for the others in the train car, but then at the end admits, “I’m still not sure why I say we when I am the only one who thinks this way or says it aloud.” In “A Better Class of People,” he mentally criticizes other men on the subway for not offering him a seat though they have offered one to a woman with a baby slung to her chest. “Sometimes it’s like I’m invisible to everyone in the world…if they knew what was wrong with me they would start a fundraiser or candlelight vigil.” However, the narrator later admits, “Truth is I never get up for others either.” There is a measure of reliability even in our “unreliable” narrator.

But the real revelations come through in the longer stories: as the narrator takes us out on“furlough” to stand in traffic, into his mother’s stories-as-distraction as she dressed him up for photographs, as he doodles stick figures in the final story of the collection. Perhaps the most atypical of the stories is “How to Live, What to Do,” which, on first blush, reads as a straight-up dystopic/post-apocalyptic story; however, taken with the others, it may well be a rendering of the here-and-now for our narrator living with mental impairment in a residential treatment facility. In other stories, he relates multiple episodes of writhing on the ground as people either kick him and rifle through his pockets—or don’t: “Sometimes people are good this way,” he comments.

But what makes a person “good?” And how does one fall into a “better class” of people? These questions seem to have followed Lopez from his earlier collection, Good People. (He even harkens back to a certain tennis match and hostage-taking.) While he doesn’t give a definitive answer, he does help us question the very notion of good and better. It might be easy to consider oneself as a “better class” of people than our narrator and those who people his world, but really?

Here there is heartache and trauma and humanity. There is detachment and longing and grief. Maybe we need to expand the umbrella that covers a “better class” of people. Or maybe, our narrator is accurate when, early in the book, he asserts, “Everyone I know is horrible.”

These stories will resonate with those who enjoy Denis Johnson’s Jesus’ Son, Junot Diaz’s This Is How You Lose Her, and George Saunders’ Tenth of December.

About the reviewer: Kim Suhr is author of the collection Nothing to Lose (Cornerstone Press, 2018) Her work has appeared in various journals including, Midwest Review, Rosebud, and Pink Panther Magazine. She was the Dennis Lehane Fellow in Fiction in the Solstice MFA program and is the Director of Red Oak Writing. She lives and writes in Southeastern Wisconsin.

← A review of Cold Enough for Snow by Jessica Au
Great new giveaway! →