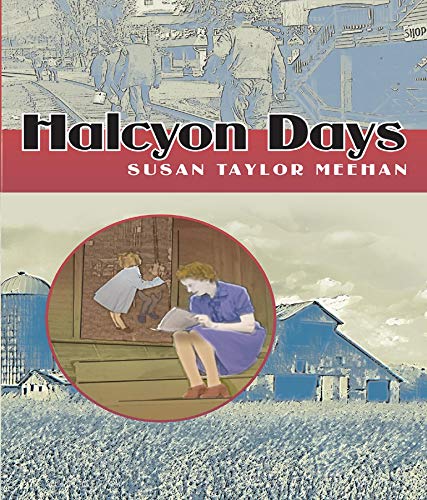 In her novel, Halcyon Days, Susan Taylor Meehan brings to life a neglected chapter in Canadian history, showing the division and fear in communities beset by natural disaster and the caprices of capitalism. “Halcyon”, which means “idyllically happy and peaceful”, is typical of the upbeat names of many prairie towns, but is also ironic. In the fictional farm village of Halcyon, Saskatchewan, times are hard and tempers short. It takes the martyrdom of an innocent person to restore peace and co-operation.

This carefully researched story involves troubling historical events, such as the Ku Klux Klan presence in Saskatchewan in the 1920s. Halcyon Days opens in 1931, but Halcyon people remember the Klan, founded in 1926 in Moose Jaw, which spread hatred against Catholics, Jews and “foreigners”, and may have been responsible for the attempted burning of the Saskatchewan legislature. The women of Halcyon, who banded together to drive this destructive organization out of the community, hope that the days of dissension in their community are over.

In the fall of 1931, Halcyon welcomes a teacher from Winnipeg for their one-room school. Lucy Wallace boards with the general store owners and is at the centre of community news. At thirty, Lucy has raised her siblings after the disappearance of their drunken father and the death of their long-suffering mother, with help from the north end mission founded by J.S. Woodsworth, a future democratic socialist parliamentarian. Lucy became a telephone operator and led her co-workers out in support of the great Winnipeg General Strike of 1919. Supported and encouraged by a social worker at the mission, she became a teacher. Now, in Halcyon, she sets out to enrich her pupils’ lives and to raise Halcyon women’s awareness about their rights and encourage them to support women in other communities. Like her social worker mentor, Lucy believes in J.S. Woodsworth’s vision of a democratic socialist party bringing about economic and social transformation. She arrives in Halcyon with a list of contacts, and one, local farmer Tom Flanders, takes her with him on a relief mission to Bienfait, SK

Bienfait coal miners struck in 1931 over wage cuts and terrible working and living conditions. The widespread drought in Saskatchewan increased their desperation because it resulted in a shortage of the seasonal farm work that had supplemented their income. Led by the United Mine Workers, who were associated with the communist Workers’ Unity League (W.U.L), the miners were non-violent, but when they paraded in Estevan, the largest town in the district, to raise awareness of their plight, police fired on them, killing three men and injuring many.

At Bienfait, Lucy admires Annie Buller of the W.U.L. for her leadership skills. When Annie is jailed in Estevan, Lucy attempts to deliver a letter of encouragement to her, but the jailers won’t accept it. Buller is one of several historical figures in Halcyon Days. Young Baptist preacher Tommy Douglas, and his wife, Irma, collect and deliver supplies to help the miners. (Douglas, the grandfather of actor Kiefer Sutherland, later became Premier of Saskatchewan and subsequently, national leader of the New Democratic Party.) Also mentioned is M.J. Coldwell, founder of the Farm-Labour organization which became part of the Cooperative Commonwealth Federation in 1932. (Coldwell became the second national leader of the C.C.F. party; Woodsworth, the first.)

The left-wing and progressive groups, with their acronyms, can be confusing, but Meehan never lets the historical background bog down the action of her story. The novel opens in a startling way: five school children are waiting to be questioned by the Royal Canadian Mounted Police, following the arrest of their teacher, Lucy Wallace, for sedition and treason. The children are terrified. Gracie, the narrator, says, “I made a deal with God that I would tell the truth if he helped me not to throw up.”

The time then shifts from 1933 to 2013, with elderly Grace going through a box of Lucy’s belongings and information about the trial. “The time has come to set the record straight,” says Grace. Along with third person narration and plenty of dialogue, the story is presented through letters, diary entries, newspaper clippings and trial transcripts. The varied mode of presentation builds tension, keeping readers alert and nervous like the characters in the story.

Halcyon Days is full of intriguing characters. Is Lucy right to reject Ivan Todoruk, a Bienfait striker? Is he genuinely attracted to her, or hoping to use her politically? Why is Lucy’s student Jane Davis always lurking about listening to her conversations? What secrets are kept hidden by Alma Davis, the very proper minister’s wife and president of the Halcyon Homemakers’ Club? Joe Marsh, an impoverished farmer who drinks and abuses his children, suddenly has money to spend – from what source? The novel also includes stalwart community leaders, supporters of the democratic socialist movement, like Bea Foster of the Homemakers’ Club. When the men of the community form opposing camps, Bea urges the women to intervene, saying: “The man may be head of the household but the woman is the neck, and she can turn that head any way she wants.” Sadly, a series of misconstrued events divides the women as well, and leads to tragedy.

Meehan includes details that capture the atmosphere of Depression-era Saskatchewan: homemakers’ clubs and farm organizations; bank foreclosures and farm auctions; indebtedness to the general store; relief shipments from Eastern Canada, and lack of books in the schools. Few fiction writers have recognized Canadian working class history as a rich source of subject matter but, as Susan Taylor Meehan shows us in “Halcyon Days”, the “simple annals of the poor” can make compelling reading.

About the reviewer: Ruth Latta’s most recent novel is Votes, Love and War (Ottawa, Baico, 2019, 978-77216-191-5) about the Manitoba women’s suffrage movement and the First World War. For more information, visit http://ruthlatta.blogspot.com