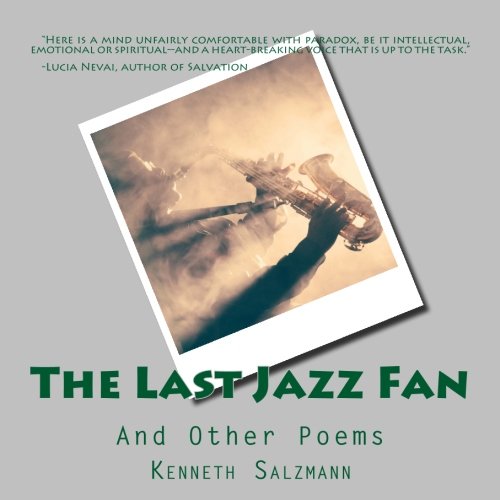 Often I’m a bit stunned by how my book choices tell a story, usually ironic, about my personal life. Sometimes it’s more thought-provoking, as is the case with a little book I just read a couple of times called The Last Jazz Fan And Other Poems. It’s one of those sweet sax solos disguised as a book of poetry, trilling down with ease into the marrow of your bones.

Kenneth Salzmann may be a musical guy enthralled with jazz, but in this instance music is really a metaphor for poetry. He is a poet. I’m a fan of poetry like his. It’s as simple as that—and as messy. You see, his poetry really does creep into the bones, the marrow, the blood. His first poem “Progress Notes” sets the theme. He sighs about going to a doctor who had no sense of wonder about the nature of blood. This poor doctor had never read Macbeth!

Many poems reflect moodily on dying, on death. One poem is told from the vantage point of a deceased person observing living people “honoring” the dead at cemeteries and crypts in a desire to keep a barrier between them. Other common themes include living on in “the immutability of ashes” and roses and art and ink stains. Ink stains is one way of looking at the words we write; even a book that ends abruptly and is abandoned.

Salzmann has a fine wit when he explores the cultural, political American landscape, such as in “Notes On The Great American Songbook.” No, it’s not inspired by music by Judy Garland or Sammy Davis, Jr. as far as I can tell. The last lines of the nine stanzas recall jazz standards. Although I’m stymied by the last one that mentions a clambake. He surely isn’t maliciously referring to a cheesy, 1960s’ Elvis movie? Hmm!

Here are a couple of examples I particularly enjoy:

One of the coolest poems in the collection is called “Transparency.” Here’s how it begins:

And when all was done and then said,
it wasn’t his flaws that caused
him to disappear.

Salzmann lives in Mexico and Spanish words are sprinkled through some poems. A couple of titles are Spanish. I didn’t appreciate them as much as I did the political jabs at America, as above or in a poem called “The Stadium,” which seems to mock how we play at life. He reminds us that, like Mexico, America’s dark-eyed as well “against all its wishes” and how it hungers for a “common language.” I could gush more about The Last Jazz Fan And Other Poems.

The Last Jazz Fan And Other Poems impressed the hell out of me, even if a few poems are a bit ‘elevated’ by another language and exhibit misty-eyed spirituality. I feel as though I’ve only skimmed the surface of the beauty of its thirty or so poems and I’m looking forward to continuing to explore them.

About the reviewer: Jan Peregrine has tried her hand at self-publishing and has about seven she recommends on Amazon or Audible. She has a new audiobook on audible.com, Dr. Freudine Is In: The Drama Deepens. Reviewers may ask for promo codes.