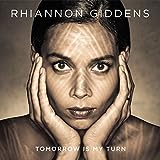 Rhiannon Giddens’s album Tomorrow Is My Turn is a wonderful collection, and very, very impressive, featuring the songs “She’s Got You” and “Up Above My Head” and “Black Is the Color.”  Rhiannon Giddens is an artist who brings a vibrant sense of moment and tradition.  It is rare for a singer to be engaged by both classical and folk music but that is the sensibility of Rhiannon Giddens.  She is a marvel.  The beauty of handmade things in a world of artificiality is part of her music’s appeal, as is the necessity of the kind of traditional folk work that she returns to again and again: a resource of sound, spirit, and strength.

On Tomorrow Is My Turn, the interpretive tone of Rhiannon Giddens is direct and forceful yet plaintive as Giddens sings of remembering a veteran father and a mother’s advice in “Last Kind Words,” accompanied by Mike Compton on mandolin.  Some of the words in that song—“let the buzzards eat me whole”—are rather tough.  “Don’t Let It Trouble Your Mind” is a tenderly sad break-up song: a woman says goodbye to a man who has fallen out of love with her.  The song’s strong rhythm prevents it from being depressing.  The traditional but dramatically vivid “Waterboy” is perfect, with Giddens’s strong voice and a heavy drumbeat under it (the song could be about thirst or lust or theft or all of them); and the sentimental ballad “She’s Got You” is bittersweet (“I’ve got your memory, or has it got me?”)—and sometimes just plain bitter; whereas the spiritual “Up Above My Head,” a simple declaration of faith in the existence of heaven, is given a quick tempo—an easy illustration of joy.  “It’s Rhiannon Giddens’s golden, soulful voice that is the real attraction.  She treats these songs respectfully but not overly so, allowing her own style to emerge in the process,” wrote Hal Horowitz of Giddens and Tomorrow in American Songwriter (February 10, 2015).

Rhiannon Giddens first came to public attention through participation in the Carolina Chocolate Drops, a black string band, and the group’s live performances and recordings.  Reflecting on the Carolina Chocolate Drops, Giddens spoke to Amy Price of the online Soundcheck mag at the Bonnaroo festival in 2014: “We started it in 2005 with me, Dom Flemons and Justin Robinson.  It was about Joe Thompson’s music—about education and getting the music out there.  We were all ok musicians, fairly young but very enthusiastic.  It evolved, and then we got signed by Nonesuch and we did a record, and that went really well.”  Original member Justin Robinson left the group, then Dom Flemons left as well, though the band was augmented at different times by talented musicians such as Leyla McCalla, Hubby Jenkins, and Rowan Corbett.  Tomorrow is My Turn is the first solo album by Rhiannon Giddens.

“Tomorrow is my turn, / no more doubts, no more fears,” sings Rhiannon Giddens.  The seasons come and go, despite human will—and one must accept that fact, but one learns and prepares and lives.  The title song, “Tomorrow is My Turn,” reflects on time and circumstance—and claims a more confident, sure future, rooted in self-belief: “For it’s my life I’m living and my only concern.”  That song, like the composition that follows it, “Black is the Color,” is one that the great—cosmopolitan, earthy, idiosyncratic, passionate, and unique—Nine Simone used to sing: the songs, then, become a tribute to Simone’s imagination and spiky integrity and demonstrate that an artist can carry tradition and not be burdened by it.  “Black is the Color” is a traditional expression of devotion (the narrator loves the ground on which her lover stands: and “I love his love”), but here it is not a ballad but is, instead, given a lot of energy and speed—it is given a fast, fervent interpretation.

Giddens’s beautiful, strong voice achieves a quality that seems timeless in the spiritual “Round About the Mountain,” a quality that is at once impersonal and true, the revelation of something real—and yet it has mystery.  (Is the song about nature, lust, or redemption—or all of these?)  “The lord loves a sinner,” the narrator sings and sings again, but accuses someone else of false faith, of hypocrisy in “Round About the Mountain.”  It is rather startling to consider the lyrics: “You go to the lord with your lips and your tongue / but you leave your heart behind.”  Then, “Shake Sugaree” is a downbeat, hard luck tale.  The drama and musical density almost turns “O Love Is Teasin’” into a piece of theatre—and then the album ends with appreciation for help during difficult times in “Angel City.”

Daniel Garrett has written about art, books, business, film, and politics, and his work has appeared in The African, American Book Review, Art & Antiques, The Audubon Activist, Cinetext, Film International, Offscreen, Rain Taxi, The Review of Contemporary Fiction, and World Literature Today, as well as The Compulsive Reader. Author contact: dgarrett31@hotmail.com or d.garrett.writer@gmail.com