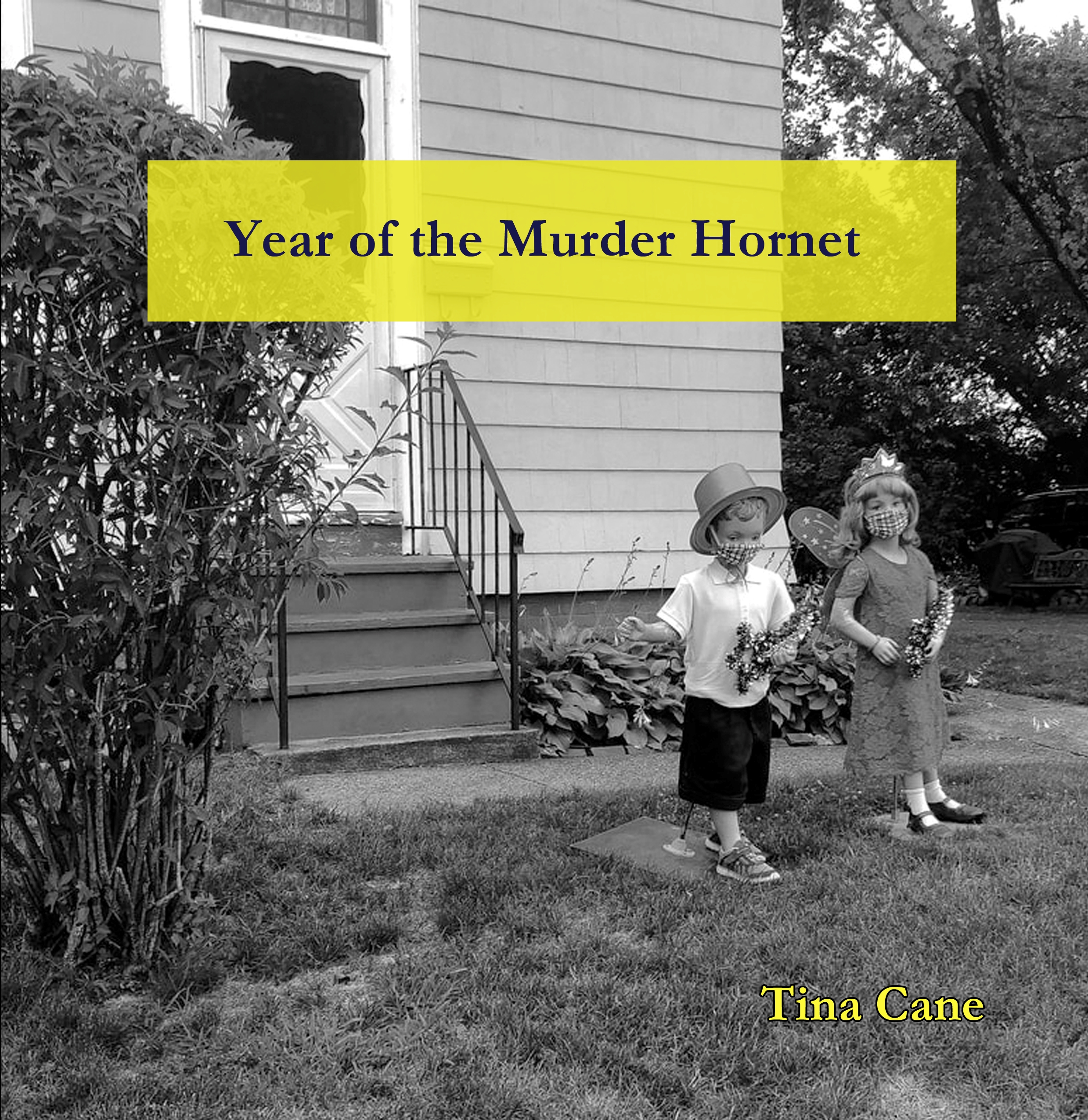 The murder hornet is the largest hornet in the world and one that scientists fear will establish itself in the United States and devastate bee populations. This becomes a symbol of the ‘I’s fears as the ‘I’ in the poems considers today’s world, what it means, and how to respond to it.

The title poem is a road map to the rest of the collection, both in content and in form.  The poem begins with a “cloud of pollen” that chases the ‘I’ and encompasses a myriad of recent occurrences:  being “overpowered” by magnolia petals, which the reader might consider positive, but which overwhelms the ‘I’; the “murder hornet” itself, that threatens on a literal level but also represents the consequences of human behavior, such as the increasing frequency of viruses like the coronavirus, weather and climate change, and the horrors in the daily news.

The form, a fragmented structure which breaks phrases and sentences apart, reflects the scattered nature of the experiences that plague the ‘I’.  The ‘I’ is beset in an apparently random way, but the poem’s structure, as seen in the turns, belies this randomness.

The first turn comes when these events shape

that has no end…

Once the world is different, once the child is grown, there is “gravity,” and that gravity makes “everything     a question or a fragment     depending on their personal weather,” “their” being the grown-ups.

The next turn comes as the ‘I’ moves into the environment, but it’s the environment of the mind, the “trees of your imagining.”  The “shade,” that is, the subjugation of trees for human purposes, is less important than “the way trees speak / with each other about each other.”  The ‘I’ tries “to live / like trees     upright yielding seeking     sunlight and silent languages.”

The ‘I’ then turns to apparently small things, such as a book about housecleaning from a fellow poet, which is a joke about one of the ‘I’s poems on the subject of “life being hard” and the human quest to make things easier. The title of the household book references products with “multiple abilities,” which sounds like an affliction to the ‘I’.

Above all, the ‘I’ loses sleep all year, in a year when “my mind cradled me,” which takes the reader back to the trees in the mind.

After this opening poem, the poet is free through the rest of the collection to roam widely through topics, which she does both in the poems she offers and within the poems themselves.  Some of her poems are clever, e.g., “Grammar,” which uses the concepts of grammar as a vehicle:

I’ve been parsing the grammar     ever since

actor or acted upon

so many conditionals     I wish I knew

how past tense     meets perfect aspect

to make the perfect past

She then addresses the reader, saying “maybe / you’re tense like me,” then lists all the tensions:  politics, poetry, love, stimulus, motherhood, pathogens.  She ends with “ready / to diagram anything     that comes my way / I say ready     but what I really mean     is willing.”

There are nine “Essays,” on comfort, an open letter to Sean Hannity, gentrification, the advancement of time, and mercy.  She addresses poetics and sound in two different essays that also involve “early morning texting with Orlando.”

The fragmented form in this collection invites the reader to think between phrases or fill in blanks, drawing the reader into a participatory role.  Are we tense, as in “Grammar”?  Are we ready or willing?  The “I” is ready to diagram anything.  Are we?

This fragmentation is particularly apt in “Libretto,” which offers this epigraph: “Every person can look back on their life and see a great opera (John Giorno).” Now, the reader anticipates the drama and great leaps of opera, and the poem fulfills these expectations.  It begins “One goal is to choose     astonishment      over nostalgia,” which is first likened to “opting for an elegant aunt / over a sad cheap cousin,” a metaphor close to home and family.  Then the poem takes off.  The ‘I’ spends much time “snared in the soft panic of reminiscence,” but is “two steps away     from being a barfly.”  Now the reader is given “some old guy     lit by the glow     of a Miller High Life sign” and that guy is “stooped over early morning whiskey,” even as “the world outside / mills about outside buttering their toast.”  The reader’s in the world, then back in the domestic scene, then out in the world again as the ‘I’ reads a poem “that began with a breakfast tray     and a purple martin / bird and which     several lines later     became a letter / to Trayvon Martin.”  The poem telescopes in and out as the ‘I’ explains how a poem about rinsing rice ends up being about a child named Tamir, how a stack of books the daughter’s no longer interested in becomes a shelf, and how the ‘I’ writes another poem about Bucky Dent, a Yankees shortstop she had a crush on when she was nine.   It would be easy to think of these as disparate elements, but they come together “a canned but thrilling aria     mixed with fear and death,” which brings the reader back to the opera of life referenced in the epigraph.

The reader could easily feel whipsawed by this whirlwind tour of the ‘I’s experiences, but reflection leads to an understanding that this is life for all of us, that even as we spend an ordinary day, drama is everywhere, we are a part of it, and the world can turn upside down in a moment.  In the closing poem, “Breakfast of Champions,” the “I” wakes in a panic, riffs on “a reflection on absurdity,” offers redemption in “forgiveness / goes both ways,” and reaches her conclusion:

The inversion is complete, the ‘I’ is eaten by the cereal, and the world, upside down, is affirmed by the ‘I’s understanding that while her only love might be “language itself,” a “lonely prospect,” she gives herself to it completely.

About the reviewer: Aline Soules’ work has appeared in such publications as the Kenyon Review, Houston Literary Review, Poetry Midwest, and The Galway Review.  Her book reviews have been accepted by Tupelo Quarterly, Heavy Feather Review, and others.  She earned an MFA from Antioch University Los Angeles in both poetry and fiction. Online: https://alinesoules.com.