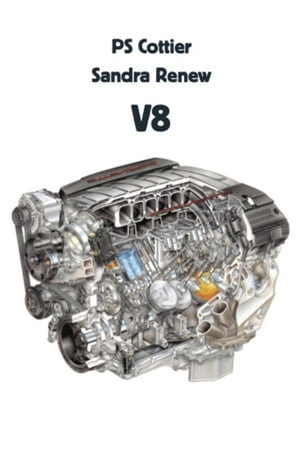 When, on the back of V8, I read that the book “takes you on a journey in every form of vehicle” I panicked. A book about cars, motorbikes, etc? How strange I said to myself and wondered what poems about vehicles would look like.  With what enthusiasm would I be reviewing it if I have no attachment or love for any form of transport? I knew that both poets were excellent writers and award winners so that gave me hope. Anxiously, I opened the book and started to read … and was mesmerised from the first few poems. V8 is a jewel on wheels, well on paper. V8 is divided into 8 sections, from Cylinder 1 to Cylinder 8, each section contains poems from both poets.

Cylinder 1 is titled “Modelling the Past” and the poems here refer to cars used in the past. Renew writes about cars used in movies, a love note of admiration and awe Rolls-Royce, a nostalgic country life narrative and about a T Ford Model converted to carry farm items even sheep. There is also a long narrative, very emotionally engaging and evocative about country life, school days and a mother who struggled to take her kids to school in a Dodge 1923. In other poems Renew describes interesting characters and their cars.

Cottier, with her skilful penwomanship, writes with humour. She brings some personal comments into some of the poems, like having an English accent and her knees swelling like tyres. Some of her poems have a very Australian flavour. The poet is able to say a lot with very few words. Very appropriately she includes a poem about the Holden car; a car that is such a symbolic figure. Here is the poem titled “The animal tells it like it is”:

At the garage owned by the museum,
they showed us all the Holdens
that seemingly indispensable vehicle
for Australian roads.
The first Holden.  The last.
And there was a model thylacine
smiling at us, as if to say
extinction is a thing, you know,
whether marsupial or car.
Her stripes. Their wheels.

In the section Cylinder 2 titled “Just Drive”, the poets bring stories about driving and travelling to many different places. Both poets are very creative with form, style, structure and theme. This is seen in their poems, short narratives, haiku and flash fictions. Here politics makes an appearance. In many of their poems they explore situations, events, the past and the present, while describe and hook the reader with their perspicacity.

Cylinder 3 is titled “Two Wheels” and as the title indicates the poems here are related to bikes and motorbikes. The world unfolds in Renew’s poems as she travels on a mountain bike in cars or trucks. She takes the reader as far as Siberia and as close as the National Trail, as in “Bikes” by Renew:

they take their time entering the new city, ostentatiously
slowing to the speed limit
inked insignia on faded denim, jeans torn, detailing
embroidered with a line from Cohen…like a bird on a wire
scuffed boots, soles worn where they’ve taken the weight of
stopping and starting from P Plate to upgrade, Northbourne
Avenue filleted by the raw, new railway…
now s single line of throbbing CCs, rumbling revs, parades
their menace and my insignificance –
I’m reflected in her helmet visor for a moment when she
slows for the lights, the one hundred bikes crowd in beside
her before sweeping on
I want to be here for the end of it

in “Failure to Zoom” Cottier, with a warm, conversational voice, brings the personal in in a measured and deliberate way. The poet tells of her failure to get her bike licence twice, but she does not look for sympathy, so the reader in the end realises she did not fail:

Until I was relegated to pillion,
and until I gave it up, because of the pillion
who rode a while inside me.
Yes, I wasn’t a good rider, quick and assured
No, I didn’t die, so perhaps I wasn’t so bad.
Just once, on the freeway, I almost made 100K.
Just once I dropped it, outside a café.

Cylinder 4 is titled “Always the Issues”, the authors in this section raise various issues and comments on places associated with cars like a parking station and a car wash.  Both poets provide vivid descriptions with sprinkles of humour and sarcasm.

Cylinder 5, titled “Apart from Cars” contains poems about all sorts of vehicles from a skateboard to a satellite. This is creativity at its best, and both authors turn the mundane into beautiful well-constructed poetry, with authentic and powerful voices. For example, in a poem titled “9 a.m.” Cottier replicates the 9 a.m. mayhem of traffic and people going to work with words and rhythm. In this section I was also impressed at how Renew, in a poem titled “Truck”, utilises dialogue to tell a story, something that it is  difficult to do.

Cylinder 6, titled “Utes” brings the reader a ‘dyke’ car, pig hunting, tales of naughtiness all which provoke smiles if not laughter. Both authors have powerful poetic voices which capture in words authentic moods and behaviours.

Cylinder 7, titled “Consequences”, includes poems about the consequences of bad driving, the craziness of the younger years, a broken heart, death and other events. These are a series of believable tales with observations about people’ events and of course cars.

Cylinder 8, titled “Further on” is mainly about the love of cars. In spite of my initial reservations, I loved V8, and I am sure that other readers will love it as well, motorheads or not. PS Cottier and Sandra Renew have written a deeply pleasurable book full of fun, wordplay, and a love of vehicles.

About the reviewer: Dr Beatriz Copello is a well-known reviewer, writer and poet, known for her sense of humour. “Her poems are sensuous, evocative and imaginative. Beatriz Copello is one of Australia’s foremost poets,” wrote Julia Hancock, ex-editor of Allan & Unwin and Freelance editor and journalist. Copello’s poetry books are Women Souls and Shadows, Meditations at the Edge of a Dream, Flowering Roots, Under the Gums Long Shade, Lo Irrevocable del Halcon (In Spanish) and her last book Witches Women and Words was published by Ginninderra Publishing. Her poetry has been published in literary journals such as Southerly and Australian Women’s Book Review and in many other print and Electronic Publications. Fiction books by author are: A Call to the Stars, Forbidden Steps Under the Wisteria and Beyond the Moons of August (Her Doctoral Thesis).

← An Interview with Xu Xi, author of Monkey in Residence and Other Speculations
An interview with Julia Brewer Daily →