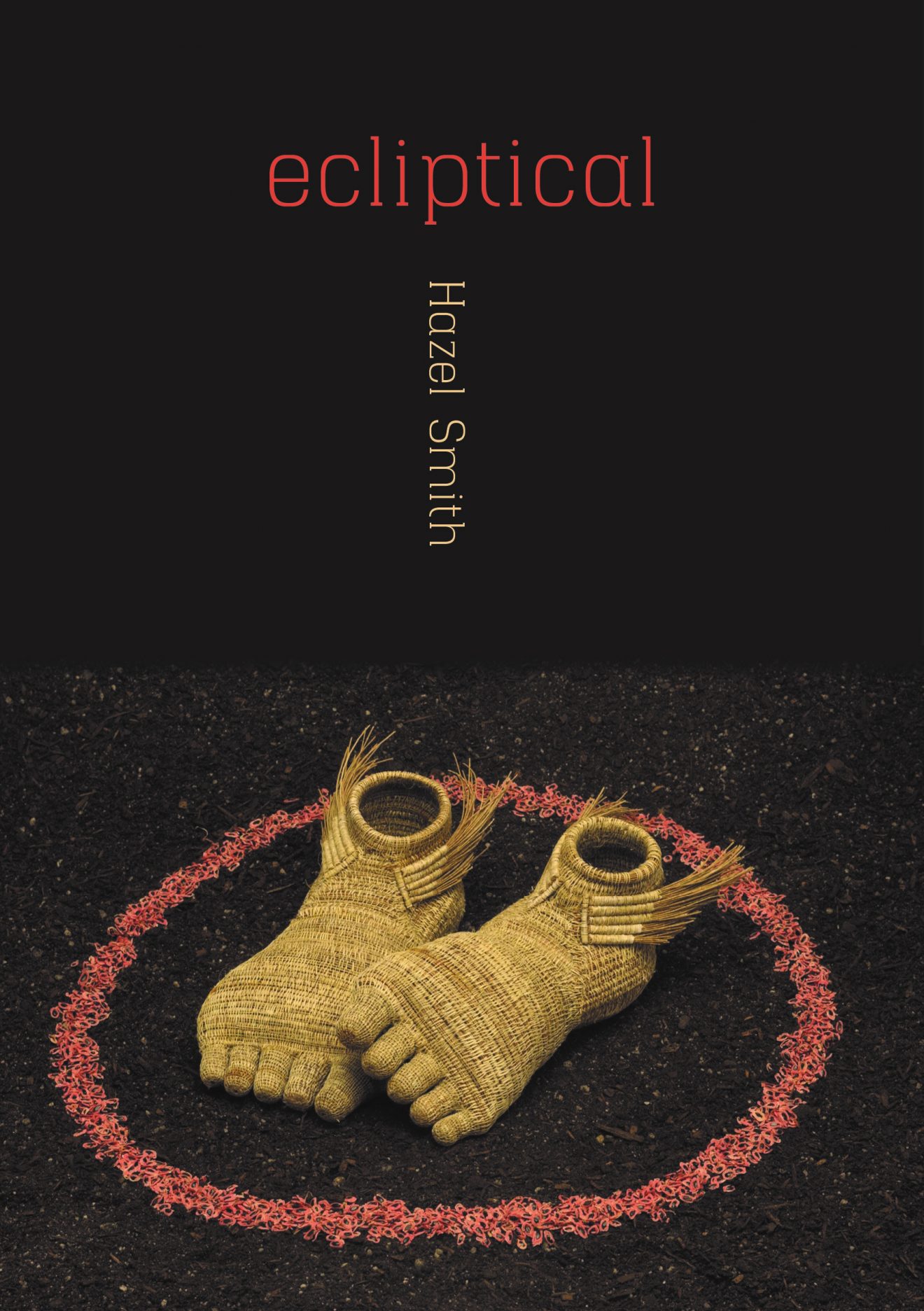 Hazel Smith is a writer’s writer. Reading her work is inspiring, encouraging play and opening the mind to new possibilities. Of course her latest poetry book, Ecliptical, is not just for writers.  The poetry is expansive and powerful, utilising experimental forms and playing as much with sound and space as with meaning. The poems are almost always at least a little wry and humorous, often self-referential as well as outward looking, and fun, inviting an engagement that feels like play. For example, the book opens with a poem, “The Collection”, which engages straightaway with the poetry making process:

Smith breaks the fourth wall a number of times through the book but particularly in the first section, where the bones of the creative process are visible through the work as in “Fractals”: “she began the poem again and again/in the hopes of redesigning its symptoms.”

There are many different techniques at play throughout ecliptical, including the use if multiple fonts, serif and san serif, bold and italics, pages that change from portrait to landscape, varied alignments, and even a series of 1-10 Likert rankings against a nonexistent poem (“Rank-a-Poem”) – a funny, and thought-provoking piece that has no referent. Many of the poems in the first section, “is my microphone on?”, are metapoetic in this way, setting up the book for the reader and encouraging play and a questioning of whether the poems are meant to be treated with reverence or as a collaborative and ever changing dance between the page and the reader.

Many of the poems in the second section, “not for the delicate”, are politically charged,  subverting corporate, government or media speak through lines that feel like distorted slogans with a surreal twist: “We could set off an emergency evacuation, then everyone would have to leave the world.” (“The Accountants (or Brexit for Breakfast”). There are several poems of this type that link together through the book, such as “Snow Monkeys” a poem in landscape orientation. Each of the lines pose a paradoxical series of statements that feel unable to be unpacked, thereby creating a koan to provoke the “great doubt”, eg: “the politician floated on packaged answers but never mopped up the question”. This is mirrored in the prose pieces which contain extended versions of these koans:

At dawn democracy was still pretending that it worked. Everything we said seemed to have been previously erased. Someone cried ‘out of here’ to further their research. They mugged the methodologies while massaging their mindsets. (“Democracy for Dummies”)

Many of the poems in this section engage with current or past events, such as with the fall of the Berlin Wall, homelessness, the 2019/20 Sydney Black Summer bushfires, and the rise of Trump, rendered in a sound poem theatre piece that made me think of Jap Blonk:

Circularity is a theme that runs throughout the book, particularly in the third section, “Elliptical Orbit”, a reference to the book’s title. This section plays with the idea of connections, relationships, and the way language can become both a bridge between people and a barrier to connection. It’s a concept Smith returns to regularly in this book, even when words are aleatory—created through chance operations or computer programs:

There is an innate logic in this work which mirrors the way an English speaker might make constructions while bypasses human rationality to create new parataxes – meaning by proximity. The way the work is structured with even spacings jutters down the page, as if the work were typing itself. An eerie reminder of its origins.

A poem about John Ashbery’s work is made triply referential, as it refers to an earlier interview that Smith held with Ashbery about Frank O’Hara’s work. Though O’Hara is not mentioned or referred to here, his work is in the subtext of the poem almost the way sardines and oranges have been left out of the painting and poems in O’Hara’s famous poem “Why I Am Not a Painter”. The poem plays with Ashbery’s name and refers to his work while taking on the famously conversational cadence of O’Hara. So much is happening here between O’Hara, Ashbery the man and his work, the speaker and the landscape of the poem itself, and yet the poem reads seamlessly:

Your poem today seems curiously unkempt: as if it needs a shave and a change of clothing. Reading you is a spot of red wine spreading on a white run, then quickly disappearing. I have never been thrown off a horse, but I can imagine what it would be like. You have to pick yourself up and start riding again before you find that the horse and you can’t cooperate. (“Ash and Berries: Communing with John Ashbery”)

Ecliptical is full of these connections, linking the living and the dead, the living and the artificial (AI, IT, stones and bones), the reader and the poem, and through space, connecting countries and timeframes, especially in the section, “passport without destiny”. This section opens with the striking multimedia piece “The Lips are Different”, which is linked in the notes to a multimedia version that take the poem in alternate directions, exploring prejudice and privilege in a myriad of modalities as it takes on the prejudice experienced by Somali woman denied entry to Canada on the basis of a passport photo. The poem contains different fonts and sidebars, which function as different voices, recreating and recontextualising the point of denial. Other poems in the section also use different fonts to pick up voices or scene changes, moving from Buenos Aires to Turkey but always rooted in the present place and space:

There are those who say there is no need to travel because Yrtnuoc Rehto Eht is always where you already are. Those who say a passport is unattainable. But she likes to plan a route, enjoy it from her home, her bed, her dependable computer desk. (Yrtnuoc Rehto Eht)

Section 4, “an ear, not a mouth” plays with the notion of creative voices silenced and stifled. This section makes connections between writing, music, and art across a lens of embodied silences. Work that explores Fanny Mendelssohn and Jackson Pollock’s wife Lee Krasner favours those silenced creators and provides a space for their work against the giant shadow of their partners.  It’s a powerful transformation: “painted through the insomniac night/in colours camouflaging as darkness” (“Lee Krasner [not Mrs. Pollock]. The final section, “time ripped”, explores many permutations of time in a surreal, dream-like way that moves backwards and forwards, between unreliable memory and impending death, pulling together many of the threads in the book: “This is the moment I know we are crescendoing towards, the moment that my will is struggling to avert” (“The Knockings”)

Ecliptical is a masterful book, full of smart details that will challenge and stretch the most dedicated of readers, but also dark, playful, often funny and always fun to read. The book is political and engaged with current affairs and events and very serious in the way it confronts violence, loss, inequities, and a wide array of impending ends, but it never takes itself too seriously. It is the kind of book you can dip into for inspiration repeatedly, for the way it decontextualises reality, or  just for the sheer joy of its exuberant wordplay.

← A review of Nothing But Light by Barbara Schwartz and Krista J.H. Leahy
Great new giveaway →