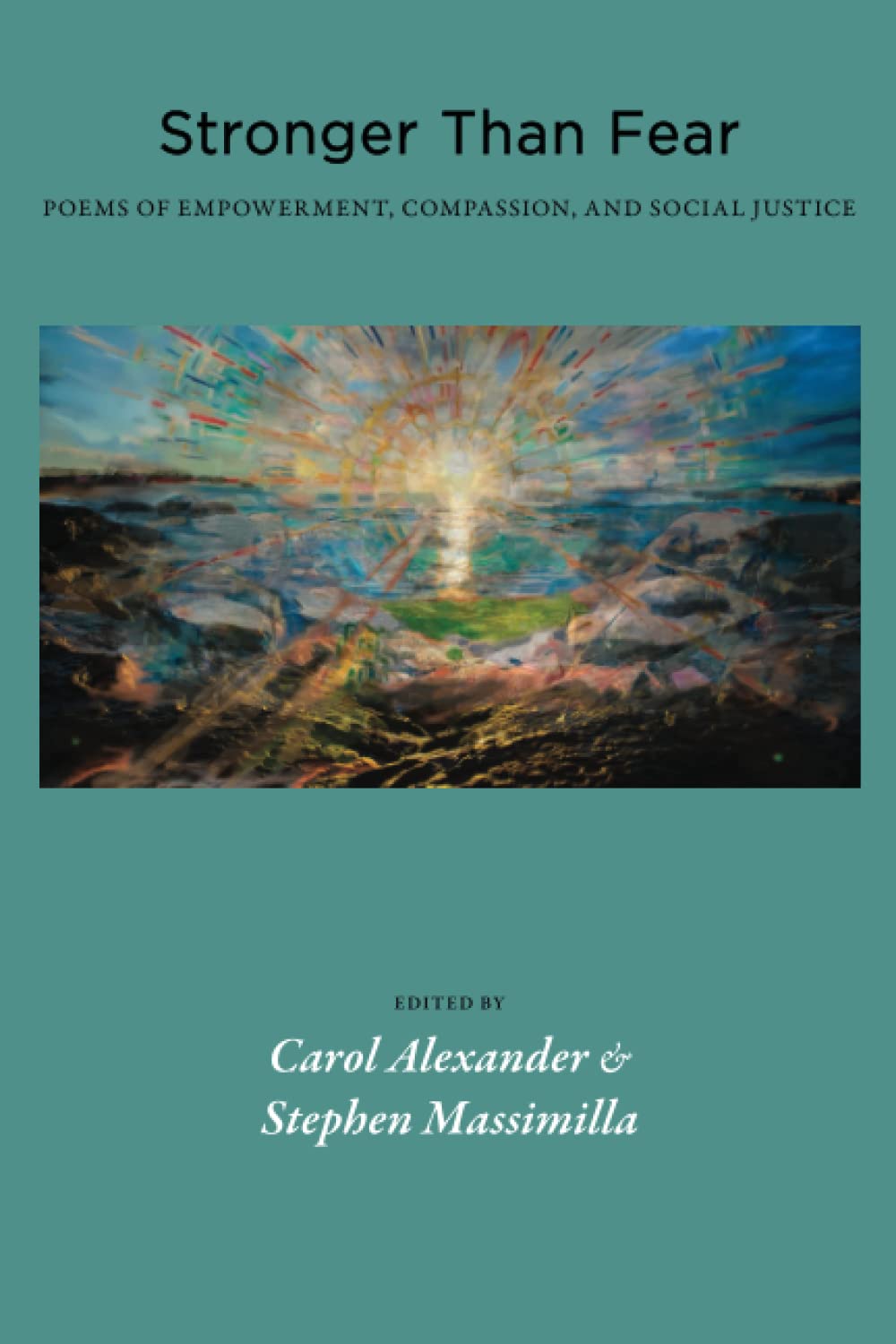 It’s a given that a great majority of American culture and peoples within its constituent cultures lay claim—always ardently, sometimes stridently—to justice, or what may need justice or what may be just or unjust. This is practically an American habit, a tradition—even if particular groups of folks need it more desperately than others. So much of this all rests on the spirits of the peoples and how they feel they can give voice to their wishes. Carol Alexander and Stephen Massimilla, editors of the new anthology Stronger than Fear, state in the introduction that their book “presents poems about social justice, empathy, and empowerment—including empowerment through education.” This anthology attempts to give voice to many of the cultures and peoples and raises questions, as they always should be raised, about who needs justice served. So far, humankind has not been able to hold a mirror up to its entire self. (Will it ever?) Indeed, the introduction goes on to list some “concerns” which oddly occludes one of the rising concerns of our time, namely queer and LGBTQ+ concerns. Certainly, that’s an omission. Intentional or not. “Queer” is, here, seemingly erased.

As the title Stronger than Fear suggests, the book wishes to raise spirits for justice rather than fight it out on the streets or the courtrooms, which is where most, but not all, social justice works itself out. It’s a valiant effort to tilt at windmills. (How many times have poets reminded us that poetry does nothing?) In order to raise spirits with focused purposes, the book is divided into sections that illustrate foci: “Wound Care,” “Not a Small Voice,” “i’d tell you,” “Lessons In Remembering,” and “Ancestral Spirits.” All of these sections provide rich experiences to ponder, whether they focus on racial justice, ignorance, the barriers to women, and the plight of immigrants and natives. What it proffers can help has recharge for the fight we know needs our attention.

Poetry provides a focused, curated lens to experience the world, and this rich collection is no exception. Despite some aforementioned representative shortcomings, these poems provide a holding place for the subjective experience so easily trampled upon in modern American life. Kevin Young’s poem “Nightstick [A Mural for Michael Brown]” provides a prism by which we can appreciate, with very helpful nuance, police brutality for its fuller perceptions and does so, by sidestepping the public discussion where polemic shut down discussion and personal growth. Epictetus once noted how people who cannot or refuse to engage with reason are no better than corpses, the walking dead. If this is true, then Young’s poem provides brainfood for the zombies who yammer blue-and-black pride/defund the police soundbites. By presenting his observations within the conceit of a mural, Young wraps the reader in images that echo and reflect the brutalities into the less-frequented corners of our imaginations. Where else in American experience can one engage in such an absolutely necessary topic that impacts Americans lives on a daily basis along with one person’s both literal, breathing and also metaphorical heart as he ponders his belief in a god that surely allows this to happen?

While poetry, and a culture that lifts up poets, provide a public place for the personal they also allows us to consider public spaces for consideration of our collective identity. We desperately need to reimagine what walls are for in our lives and what walls are and why we may need them despite our best intentions and wishes. Any classroom teacher knows that the pairing of poems helps us get beyond the dangers of mono-narrative. The collection proffers one such pairing with Naomi Shihab Nye’s poem “Separation Wall” and Solmaz Sharif’s “He, too.” While Shihab Nye’s poem, which plays off Frost’s “The Mending Wall,” speaks to the “sour” cultures that leads to walls, Sherif’s poem takes us to theoretical wall, the custom’s officer at an airport but quickly redirects how the arguments we wall out our opponents far more conclusively than any theoretical or perhaps even physical walls. Both poems engage the heart and mind with enough balance and thrill to lay their experiences in an interest and compelling way that your average high school students could appreciate. The whole collection reads like that and that is a boon.

A second miss here may be the voice for the earth and its animals. It’s not correct to say that these poems are anthropocentric: they simply lean into a human experience that presupposes the human residents of the universe with greater significance. It’s a second sin of omission.  Kim Addonizio’s “High Desert, New Mexico” gives voice to the desert (specifically the part of the world easily dismissed as a wasteland for it’s less-than-fecund dollars raised but also illustrates to us why we need it more than it needs us): “The wind is saying something,” the final line reassures, “Listen.” Even here, in a poem named for a large swatch of environment, the poem returns to what the environment can offer us. This is all true and enrichening to human life; however, it was a big disappointment that the poem and the editor’s selections did not make more of how environment is not merely something we can take from, but part of who and what we are. That voice needs to be heard!

There are very many fine poems in this collection by both nationally recognized and lesser-known poets. Ultimately, I, as a veteran high school teacher, would feel comfortable using the anthology in my classroom; however, if I could only select one, I’d have to look elsewhere because nobody in my classroom will lack representation. Queer kids simply get little-to-no representation in most high school curricula; many states have outlawed it. Did Alexander and Massimilla need the “Don’t Say Gay” bill to be passed before they would have included queer experiences? OR did they see the bill’s writing on the wall and merely caved to state laws, censorship, and schoolbook buyers? No matter what the truth is, this is a loss, and yet another sign that the straight, white hegemony that still lords over our country does not care and needs to hold itself accountable for representing all. No poem should be left out of our body politic.

About the reviewer: PK Eriksson is a poet, critic, and English teacher from Chicagoland. PK’s poems and reviews have appeared in The Adroit Journal, Anomaly, The Literary Review, Quail Belle, The Santa Fe New Mexican, among other publications. Find PK @pkeriksson10.

← Ascent into Blue: a review of Mist in Their Eyes by William Doreski
A review of Nothing But Light by Barbara Schwartz and Krista J.H. Leahy →