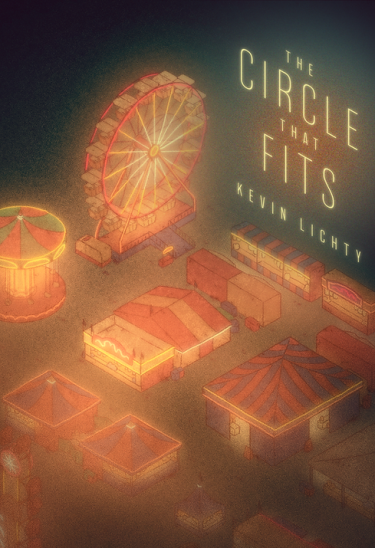 Running away to join the carnival is a childhood fantasy, but what about running away from the carnival? Kevin Lichty’s novella gives us a protagonist who grows up in a travelling fair, but is eventually forced out on his own in this tale of family, fable, and finding where we ‘fit’.

In a vignette-based narrative that takes us from Daniel’s childhood through early adulthood, we find moments of surrealism amid vivid violence within a delicate, rhythmic language that supports the wonder and naivety of the narrator. Daniel’s first circle is drawn by his father, a literal circle in the soil his father says is “all the room you have now” and forms a boundary on his grief after his mother leaves the family. From here we see the circle image woven throughout the narrative as both a prison and a panacea. The carnival’s pony ride is an early example:

Lichty explores what constrains us, what our orbit is, and his ‘circle that fits’ is essentially community. At first this is the rough yet protective circle of both Daniel’s family and the carnival itself. But when Daniel is left alone with his father’s trauma, the encouragement of one of the other carnies to find a life outside the fair finds its mark.

The child narrator convincingly grows up, but doesn’t cease being a creature of innocent wonder. It can be a bit of an easy ploy to have an insightful, sensitive, beautiful narrator at the heart of a story about finding one’s place in the world. In fact, the only character flaw our narrator presents is his flawless acceptance of the family and situation he was born into. Lichty expertly produces the calm cadence of this lyrical outlook on life, even through episodes of violence that should puncture this cadence. The scars we see accumulate on Daniel’s body show his struggles, but the blows land harder on the reader than narrator – even they don’t deter his calm acceptance. The explosion of anger and violence that marks a turning point in the narrative – Daniel’s violent break with his father, and subsequent departure from the carnival – pushes Daniel into a search for a new ‘circle’, but even here he finds stasis. We see him lying on the tarmac at a bus terminal as passengers step over him, curled up in a ball on the ground at a fair where he suspects his mother now works, and staring quietly into his diner coffee refills for as long as the waitress will let him. Eventually a charmed new life begins to open to him, but circles aren’t open, and this one soon threatens to close.

With little anger, regret, or resentment, readers are left to accept Daniel’s fate with the peace he does, and there is a magical realism element that makes his coming-of-age more lyrical than lifelike. But even when faced with the opportunity of a lifetime, or when beaten and broke, Daniel often seems as much an observer to his life as we are as readers. And as much as he, as a narrator, easily seduces us, this calm innocence can become limiting. As one character says, “If you close your eyes and forget, the circular motion will almost feel like progress.” Almost. In one scene from his childhood, the Ferris wheel operator stops the ride when Daniel reaches the top, holding him there in his circle, suspended above all he knows. For all the beauty of his story, perhaps he never actually comes down.

About the reviewer: Heather Campbell is a Montreal-based writer with publications in Grain, Prairie Fire, CV2, The Capilano Review, and PRISM International. Her reviews have appeared or are forthcoming in Grist, the Women’s Post and Dance International Magazine.