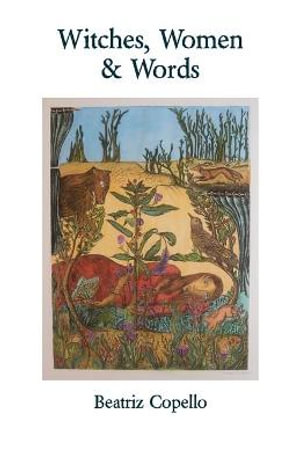 In Beatriz Copello’s powerful and imaginative poetry collection Witches, Women & Words, witches are seers, healers and instigators of change who are capable of restoring balance both to society and to the individual. They embody that intuitive and creative side of ourselves that reveals a deeper truth. The poems are visceral, full of irony and wisdom, taking the reader on a transformative journey that ultimately expresses hope.

In the poem “Surrender” the witch travels over the earth surveying what she sees, the poet writes:

I ride at low speed on my witch’s broom
over houses and streets through open windows
there for all to see despair deceit anger.

Throughout the collection there is a clear perception that patriarchy, organised religion and exploitation of the environment have led to destruction and chaos. The poem “Innocent” reveals how women healers and midwives have been depicted in history as ‘the other’ and a threat to the existing order, an easy scapegoat for society’s ills. The poem titled “Spellbound by the Moon” expresses an exquisite beauty through the eyes of love and this is contrasted with the direct or apocalyptic language in later poems where humans and the environment suffer the effects of depression, natural disaster and war. The results of greed, exploitation, selfishness are contrasted with the beauty of nature, love, the interconnectedness of life. “Wisteria” is another beautiful poem expressing the continuing presence and changes of nature interacting with a child’s world, a source of solace during personal change and bewilderment.

There is a sense of movement and transformation through the power of imagery and the rhythm of language, a powerful journey of imagination. In the poem “Escape” the subject experiences a dynamic and transformative journey through imagination itself away from suffering and distress, here is an excerpt:

in dreams she becomes
a winged being who travels
she extends her hands to touch
the faraway, the impossible.
In this space that is only hers
time does not exist
pain is only the fantasy
of a madman who believes in God

This possibility for visionary change is continued in the section titled ‘Humans”. The poem “Depression” depicts transformation through suffering, understanding, courage and faith in life and oneself

Somnolent and rigid she crawls out of her cocoon
dizzy and vulnerable she confronts life
scared she learns to walk again
step by step
now she lets her blood run wild.

Similarly, the poem “Hope” expresses the same transformation through suffering and understanding, rebirth and reawakening, the final sentence, a similar affirmation of life:

to live is a challenge, hope is slender
like fair grass, delicate white maiden hair
and he makes a commitment. He chooses life.

“Inheritance” expresses the possibility of behaviour and destiny being imprinted in ourselves, encoded in our cells, that balance of what we can change and what we can’t, as well as our shared connection. This interconnection of all life is also expressed beautifully in “Our Essence”:

I fly above flapping wings
with flamingos in formation
creating a red cloud.
I am a Japanese fighting fish
hidden in aquatic forest
waiting for its prey.

In “Genesis” and in other poems the role of the poet is revealed as connected to the same capacity for ‘seeing’ and instigating change as other visionaries. Imagination and creativity play a key role in survival, well being, a balanced life and world. Without them positive change cannot occur.

In “Refugee” the poet again expresses the experience of flight from disaster and trauma and in the final section “The Social Order or Disorder?” there is a warning and urgency about violence, war and an existence that is out of balance with the environment. The collection finishes with the poem “Aleppo”, a salutary warning on the devastation of war.

Witches, Women & Words is a beautifully written and powerful collection that is transformative through the force and rhythm of its language and the ideas it conveys. It is an affirmative vision of what can be.

About the Reviewer: Carol Chandler is an award-winning author who has been published in some of Australia’s most highly regarded literary magazines. Her short story collection Anonymous Caller was awarded First Commended for Best First Book in the IP Picks Awards. Her novella Black Mountain, was awarded Highly Commended in the Seizure Viva la Novella IV competition, longlisted in the Davitt Awards for women crime writers and awarded Commended in the Society of Women Writers Awards. She has been granted the award of Writing Fellow with the Fellowship of Australian Writers, has co-edited Written in Sand, a community poetry and visual arts project and is the editor of Bondi Tides an anthology from the Bondi Writers’ Group. Her latest book Watched and Other Stories has been published by Ginninderra Press.

← A review of Our Laundry, Our Town by Alvin Eng
A review of How Icasia Bloom Touched Happiness by Jessica Bell →