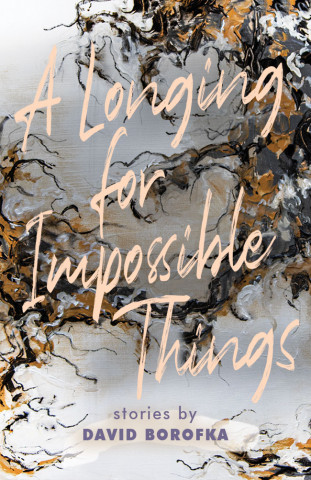 Short story lovers can rejoice in this much awaited collection, A Longing for Impossible Things, from the Iowa Short Fiction Award winning David Borofka, a master of the form. Regardless of the failings of his narrators and assorted ne’er do well characters, these tales are told in a generous, recognizably human voice, marking Borofka as a writer in whose company you’ll find deep pleasure. Characters’ failings are both unflinchingly observed and held in tender, witty regard, even after a lifetime of screw ups. Most are wrestling with the gap between their modest youthful dreams and the limits imposed by adult realities. We see them floundering in high school or college–their parents fleeing the scene or begrudgingly sticking around to flaunt their own messy concerns–and never quite getting a grip on all that came after graduation, no matter how many decades before. The screw ups are as engaging as the aspirations: tract houses are lost, wives and children leave for greener pastures, ‘til death do you part jobs disappear and subpar apartments are found.  A particularly favorite story, “Attachments for the Platonically Inclined,” opens with a bowling ball, George Foreman grill and plaid sports jacket destined for the Goodwill, objects soon revealed to represent various degrees of one man’s promise, failure, perfection, and abject misery.

Borofka’s protagonists suffer a multitude of short comings with many of the things they most fear coming true. Women are tough, until they’re not, and men are just trying to get a grip before their lease on life is up. All of this takes place in communities outside the buzzy urban centers of contemporary life: the rural suburbs of Fresno or the Pacific Northwest, a gentle Nowheresville, where the fair to middlin’ life may still be lived, in a time before cell phones, social media and Spotify, when a young woman could possibly find financial independence with angry song lyrics penned for a surprise platinum record.

Borofka works in the occasional high culture reference, elevating his sad sacks’ social standing more than they may ever know. One story ends on a La Boheme note, only to have the next story feature a struggling artist couple. There are crises of faith, such as in “My Life as a Mystic,” with its hapless teenage Jesus of North Fresno, and a faith in crises, as in the hoarder’s burning house and granddaughter’s subsequent fall from grace in the story “Fire.” Despite their major failings or minor successes, everyone does seem to be doing the best that they can, no matter how hard they fall. These are lives of quiet desperation lived on the well beaten path, real people surviving uncelebrated lives. And because they are often looking back at the bumpy road actually taken or at the toll booth ahead, time travel happens. In the story “Next Day,” we are 30 years hence with a woman, her second husband, a dentist, and three kids on 5 acres in a 4 bedroom house overlooking a dry riverbed. She’s still haunted by the vision of a deceased, cancer ridden apartment manager surrounded by photos of her famous former lovers and her own adulterous affair that initiated her long term marriage.

In “Retirement Dogs,” a daughter returns home to care for her mother and escape from a loser husband, after her father dies in a fall from the roof of her childhood home. The men she remembers from her youth, have all retired and are now walking dogs, small, cute, leashed concerns gifted to them by wives wanting to keep them busy. The daughter, we learn, once wanted a dog, but her mom got cats instead. The loser husband once got her a surprise dog that had to be returned. Mom, we further learn, tried to escape her marriage into an affair and now that she’s losing her mind, she talks only about the long ago lover, rather than the recently deceased dad. Now the daughter walks her mother on the streets of her childhood while she waits for the next stage of her life. Many in these stories are overlooking a version of that dry riverbed, but in their minds it’s overflowing with a pure longing for impossible things. Thanks to Borofka’s artistry, we can wade into its current, feeling both the longing and seeing the impossible, maybe even in our own lives.

About the reviewer: Nancy Spiller is a writer, artist and educator living on Los Angeles’ wild western edge. She is the author of: Compromise Cake: Lessons Learned from My Mother’s Recipe Box. and Entertaining Disasters: A Novel (With Recipes)and teaches creative writing for the UCLA Extension Writers’ Program. This July 16-24, she will be teaching The Creative Cafe: Food & Writing on Zoom.https://www.uclaextension.edu/writing-journalism/creative-writing/course/creative-cafe-20-food-writing-writing-x-4651e . More can be found at http://nancyspiller.org.

← A review of How to Be Between by Bastian Fox Phelan
New giveaway! →