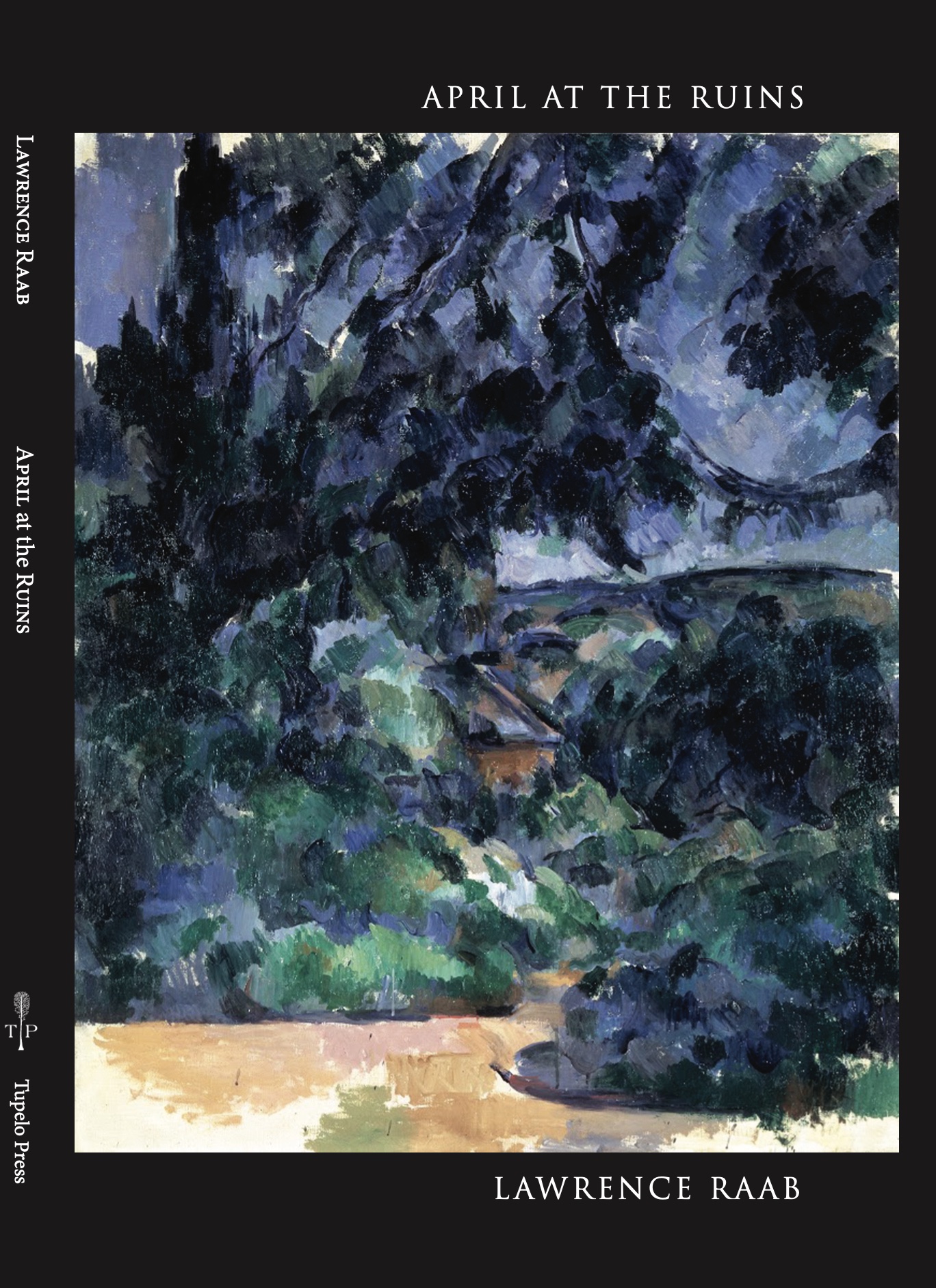 On a cold winter day, Tupelo Press sent me Lawrence Raab’s book of poems, April at the Ruins. As Amy Gerstler points out, the title pulls at both renewal (April) and decay (ruins). This tension lasts for the entire book; Raab’s poems are dynamic—they move, twisting and pulling at their nouns and verbs. April at the Ruins feels as if it is a poet looking back at a life well lived, while offering wisdom to those who will come next. The poems “[sing] so sweet a song/the children understand/this music will guide them” (7).

When I was in undergrad, I took a class at the University at Buffalo with the poet Irving Feldman. He used to drink hot chocolate while he read poetry. The room smelled of melted chocolate and we all sat around and listened while Feldman read us poetry, clearing his throat softly in between stanzas. This is the same feeling I get when I read Raab’s book. It is quiet mythmaking. This calm, trustworthy voice, speaking of death as a “shrugging off the body’s/weight, then calmly floating/upward through the lucid air” (77).

However, to me, this collection isn’t just nostalgic. Instead, it is full of wonder. Wonder and the ability to step through wonder into a whole new place. His poem, “Perhaps” is full of this nostalgia tinted with wonder. He uses magic realism to transport a memory in the present tense. At first he is “a boy, of course,/gazing across the water, waiting”(9) and then in the middle of the poem, the speaker’s deceased father appears smoking a cigarette: “He’s been dead for a long time,/but he’s still reluctant/to talk” (10). The speaker tells us that the father’s secrets, like the neighbors’ secrets, are intact. Then, most curiously, the speaker of the poem asks, “Should I have thought about it?” (10). This line perplexes and intrigues me. What should he think about? The secrets of the neighbors across the street? His parents out on the lawn? I am perplexed, but in a very satisfying way. Because from this point in the poem, the poem moves into that strange abstract conversation that we have with the dead when we are looking for advice. The last two stanzas of the poem are

Yes, he says, perhaps
I should have thought
about everything
more often. Perhaps I did.
Now you tell me—
what difference would that have made? (10)

This poem is so mysterious and so wonderful. Literally, it is made of wonder—some kind of dream quality that awakens spaces inside ourselves. I find myself talking to my grandfather (who I never met) whenever I smell cigarette smoke. This feels to be the material that this poem is made from.

On a site called Tribute, Raab commented that when he writes poetry he might surprise himself. It’s as if each line is a journey to another thought. Elisa Gabbert, in the New York Times, talks about the “lyric decision” in a poem: the choice of what could come next. She calls this, in another essay, “leaps.” Raab consistently takes leaps in his writing. In the poem, “Moon and Sun,” Raab leaps from talking about “a bargain between the moon and the sun” (11). Then he steps out across the fourth wall and says, “I won’t say any more./If I did I’d have to lie,/ and I want you to trust me” (11). Then the poem ends with the feeling that as adults, we are not cared for in the way we are cared for as children. This is so close to being nostalgic, a person looking back and missing childhood, but it strikes me as a kind of sorrow-filled wonder. He is questioning meaning in our life, by bringing up the image of a moon that is “aloof and alone” (11). This poem comes right after “Perhaps,” the poem I spoke of earlier. These two next to each other serve to dream, to cross poetic boundaries, to transport us into the fibers of non-rational thought.

In an interview with Amanda Fagan at Butler University, Raab says, “Don’t stay where you are if you can’t think of anything more interesting to say. Just go somewhere else. It’s a poem; you can do anything you want.”  So much of Raab’s choices in his poetry, his lyric decisions, is to create a psychic space that we can fill with wonder. For example, the last stanza of “In the Earliest Days,” a poem about early humans wondering what happened to the sun when it sets, he writes, “the night/must have been magnificent/in its loneliness, and the dawn/a kind of rapture we can’t imagine” (4). Raab’s poems move. They go places, unexpected places and so often that place is to “wonder.”

Raab cites Mark Strand as an influence of his work. I was curious about this and decided to be a kind of poet detective, checking out books by Strand at my library. At first, I didn’t feel the influence, but then I found the poem “Your Dying,” part three in Strand’s “Elegy for My Father.” Here Strand writes, “Nothing could stop you./Not the best day. Not the quiet. Not the ocean rocking./You went on with your dying” (Strand 86). The mood of this poem is so similar to Raab’s work. It is this quiet rocking back and forth, small steps, small movements and then a leap. It is sad and tender: a very certain kind of beauty that satisfies my hunger for sad and beautiful things.

There is so much more I could say about Raab’s work: the exquisite absurdism “The tree you are watching is someone else’s piano” (42) or the beautiful controlled enjambment in “What We Did Yesterday”(47) which creates such sadness about putting a beloved dog to sleep, but what I want to end on is the kind of wonder that pulls us into hope. As I mentioned in the introduction, the title is so fitting: it’s spring at a point of decay or death. In his poem, “Just Now,” Raab writes about death again, but this time it is seen as a next world, a future without time, “which leaves stillness/everywhere” (40) and a future where the speaker “changed my mind/about the future” (41). He continues:

Look,
you said, turning back
to see what was gone—
how lucky
we are to have been here
just now” (41).

Here in the world, like Janus, looking forward and looking back. This contemplative collection of poems both  delights us and instructs us to look at our lives with nostalgic, hopeful, quiet wonder.

About the reviewer: Alexis David is an American poet and fiction writer who holds a BA from Hobart and William Smith Colleges, an MS from Canisius College and an MFA from New England College. She published a chapbook called Animals I Have Loved with Dancing Girl Press. She reviews books of poetry for Tupelo Press, North of Oxford and the Masters Review. Links to her published work can be found here: https://alexisldavid.wixsite.com/alexis/writing.