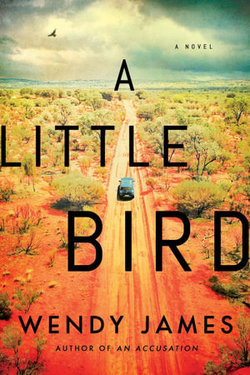 Though the subject matter of Wendy James’ books can be disturbing,  there is a warmth that comes through no matter what she writes.  Perhaps that’s because all of her books are character focused, rooted in the domestic and familiar. James’ latest novel A Little Bird, is no exception. The protagonist of the book is Jo Sharpe, a journalist who moves back to her home town Arthurville in the wake of a failed relationship and after a medium tells her that the answers she’s seeking are at home.  Homecoming is not easy though, given Jo’s father is a depressed alcoholic with a Cancer diagnosis, the town is in serious drought, her mother Merry and baby sister Amy drove out of Jo’s life in Arthurville when she was eight, and there is a community full of memories she thought she had escaped forever when she left. Jo manages to get a job at the community paper, The Arthurville Chronicle, writing light-hearted good-news stories about the locals, which of course, leads her to uncover so much more than a few stories.

James structures the book with two narratives set in different timelines. Jo’s first person narration is the present, Arthurville 2018. Jo shares her uncertainty and a dawning self-awareness as she reckons with the past:

Nothing has changed since I was home last. In fact, nothing has changed since my childhood either.  A cracked concrete path neatly dissects the front yard, which is now completely bereft of any vegetation, including grass; the west-facing verandah still displays the cast=iron Italiante three-piece setting Dad inherited from my grandmother, and that one one, as far as I know, has ever used.  The blinks are down and the front porch light is off.  Well, why would it be any different?  I didn’t tell him I was coming. I haven’t told anyone. What am I doing here? (9)

The second narrative belongs to Jo’s mother Merry, set in 1985. The setting mirrors Jo’s Arthurville, but is written in third person, tracing Merry’s attempts to carve out her own journalist career at the same Chronicle where Jo is working. Jo and Merry’s stories move in opposite directions, creating a dramatic tension that drives the plot forward. A third narrative comes from snippets from a 1992 column “A Little Bird”, the humorous gossip column anonymously written to gently call out and poke fun at bad behaviour from the town locals which gives the book it’s title. The stories told through these columns crosses over the other two stories until the three stories line up, weaving together like a helix, linking Jo with her mother in a way that is slightly mystical.  Jo’s own reintegration into Arthurville is managed with just the right blend of nostalgia and irony, Jo’s intelligence providing a lens that is both loving and critical, allowing the town’s homey beauty and its decline to come through her perception:

When we were kids, this part of the river was a popular picnic spot, an unusually straight section of what was typically a meandering river, shaded by the surrounding bush, a grey sandy area hat was reminiscent of a real beach, at least if you were a kid with a bucket and space. The water here was calm and relatively shallow00and there was usually a vast expanse of water.  It’s more than fifty metres to the steep bank o thee other side of the river.  But now, the current is sluggish, the water muddy, a trickle that’s barely a metre wide, the surrounding riverbed dry and created.  You can walk across the river from bank to bank. (151)

While Jo’s voice is the strongest, her father Mick is an engaging anti-hero – just gruff enough to avoid sentimentality, and just vulnerable enough so that the father-daughter relationship becomes a pivot in Jo’s arc. The plot unfolds through Jo’s character development in perfect pace, keeping the book moving quickly without ever feeling rushed. There is an organic progression to Jo’s sleuthing that feels very natural, as the different characters’ stories begin to unwind against Jo’s. Perhaps the most compelling minor character is Shep, a former boyfriend of Jo’s who is now a minister running a youth ministry to teach troubled boys practical skills.  Shep’s steady sense of purpose makes a nice contrast to Jo’s increasing desperation, and his work with the boys provides a key theme about the power of connection and mentorship.  Other themes around class, prejudice, trauma, and even a hint of ecology are subtle but pervasive, threaded lightly into the dramatic plot.  A Little Bird is a terrific book full of depth and atmospheric richness, which,  like all of Wendy James’ work, reads very easily but lingers.