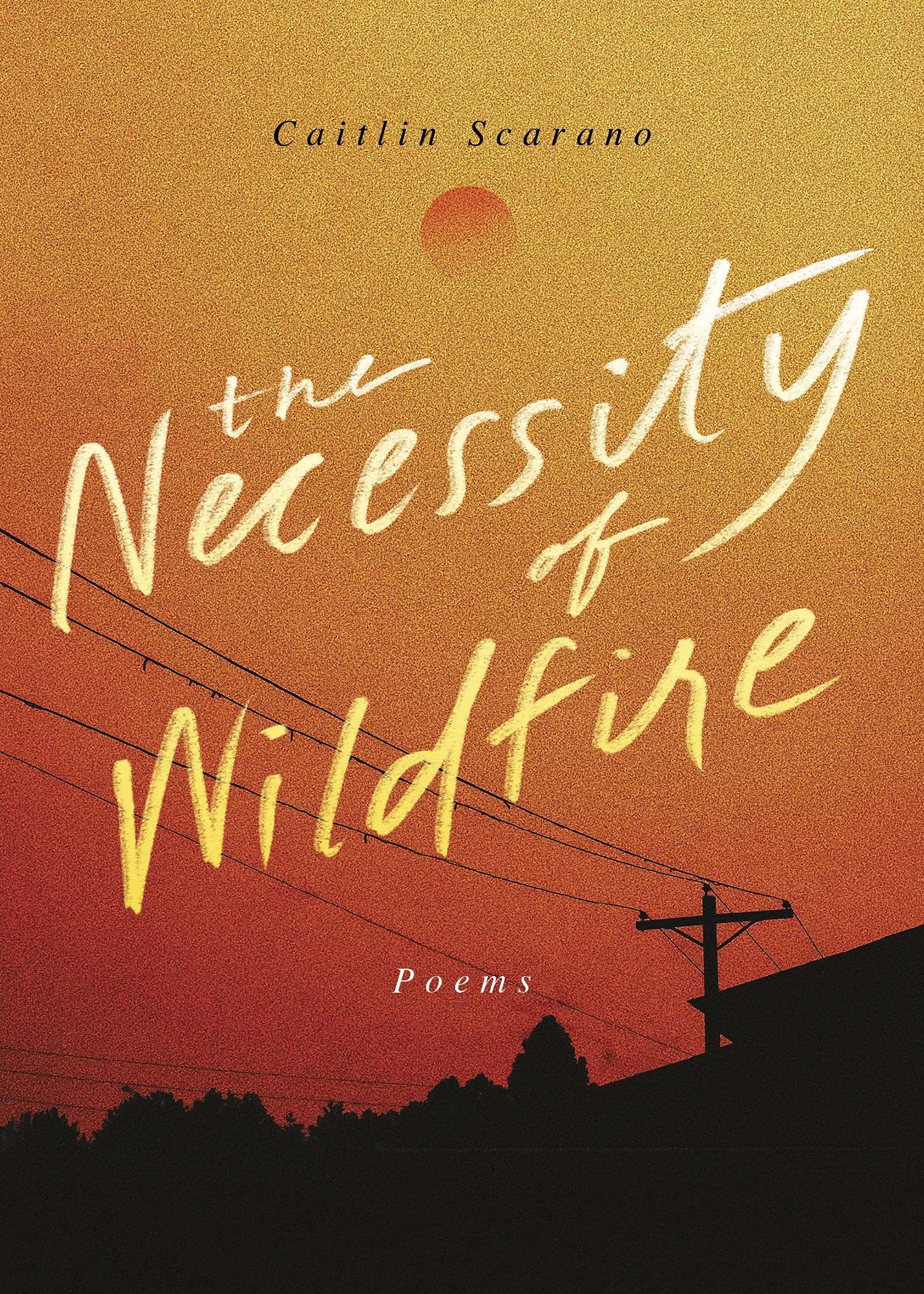 Caitlin Scarano’s second full-length poetry collection, The Necessity of Wildfire, traverses a journey from emotional wildfires of a Virginia youth to embers of resolve in the Pacific Northwest. Scarano’s writing is both controlled and expansive. Poems refer to the natural world even as they allude to early familial violence and a father’s illness with genetic implications.

Animal references arise in each poem via narrative or metaphor. In the intriguing first poem, “The houses where they eat the lambs,” we read of birds fallen and in flight. The speaker herself proclaims to be the “weak point, a snap, / furcular crack,” the point at which the wishbone of a bird breaks. Bird lovers know that a broken furcular prevents such creatures from taking flight just as a fractured family cripples a child’s development. Scarano uses knowledge of the natural world to expand the reader’s perspective.

Within this same poem is an admonition to go beyond the Hippocratic Oath’s “do no harm.” “To not harm / each other is not enough,” says the poet. Subsequent poems suggest that the oath carries weight not just regarding medicine, but also of human relationships and the natural world.

Poems about the young speaker’s family in rural Virginia emerge. Something ominous resonates, as in “Every disaster branches out from another.” When the grandfather reacts brutally to the child throwing his favorite cat off the porch, he promises, “I give you this // lifetime of fear–a throat full of bees.” This metaphor of threat sets the course to explore sad and violent generational gifts.

Scarano’s collection doesn’t have section breaks, but is broken up by three nonfiction pieces that help describe a geographic arc. “Deer Season” conveys much about growing up in Virginia. The essay begins in the poet’s adopted home in the Pacific Northwest and answers her partner’s question, what growing up in southeastern Virginia was like. The piece illustrates both place and gender stereotypes, “On the first day of deer season, the boys were allowed to miss / school, while the rest of us sat in those desks as if strapped in.” Despite expressing the beauty of her native landscape, Scarano remembers “A bucolic landscape that hides households brimming / with desperation, prejudice, and violence.”

The second nonfiction piece, “Not how the silo stood but what it was after the fire,” is a potent piece about a mother’s youth from which the reader would worry that hardships might follow for the speaker and her sisters. The third piece, “God’s Country,” describes the poet’s adopted home in the Pacific Northwest. Not a perfect habitat for humans, but better than she had. In a striking simile, this poet in tune with the natural world writes, “Outside our window, a barred owl’s cry pries open / the night like a tin can.”

The trajectory within this collection moves forward also in a subtle emotional arc while braiding themes of escaping cultural background and family trauma as well as partner choices and whether to bear children in the face of possible birth defects.

Scarano knows nature and animals well enough not to sentimentalize predators and prey, while suggesting that humans can be both of these. She includes pieces about her obvious interest in wolf recovery in Washington’s Cascades. Early in the book, the poem, “They Named You Patriarch,” dwells upon the death of “wolf 32M” of one pack. The reader can’t help but recall Scarano’s poems that touch upon the death of a human father when reading these lines:

I study the pads
of your feet–massive and made
to be worn down. I read
about the progeny your sired,
……….
How stillness
finally finds us. The air
was soft, your radio
collar emitting a mortality
signal from the creekbed
where you laid down.

Several poems refer to the speaker’s father, regarding illness and a possible inheritable birth defect diagnosis. “Calf” uses the natural world and landscape to braid and foretell how knowing genetic history affects young decisions whether to bear children. The speaker’s mother reveals the father’s sickness is linked with those of paternal relatives, “Lesions on my father’s face. His twitching / legs. Likely stillborn, I did not attend his funeral.”

With an allusion to the book title, the poem, “During the Wildfire,” melds lines about butchering a deer, sex, rain, dry earth crows, and fire in eleven enjambed couplets that end with these tragic and beautiful lines:

Inside his mouth I find a love letter his mother wrote
to his father years ago. I unfold the letter and find a series
of her sobs no one ever heard. What can I offer you
but this dream of a burning house? Even now my crow
eats his mantle of wasps at the window. Even now,
we hang maps like tapestries. We are where we’ll never be
again. Love: the beetle I bit in half. It took me so long to realize
there are people who start fires, not to tend them,
but to see how things burn, and it took me even longer
to realize some places need fire simply to survive.

Scarano writes lyrical poems of resistance and resilience. A poem, “Song Dogs”, cites the speaker’s mother who requested and begged the father not to molest their daughters, and “the letter worked.” Acknowledging better fortune than other women of Virginia had been bequeathed, this speaker “Never had to beg the way / the women before me had to beg.” In the adjacent poem, “Nights like these I think of my sisters,” power resonates in the advice, “Don’t be the horse licking sugar / from anyone’s hand. Be the mare that / bolts.” This poem is full of effective line breaks and powerful metaphors that issue strength. “Girl, be the flame / that leaps the highest.”

In these poems, the speaker examines life with lovers and contemplates the future in another braided poem, “Buttercream.” The difficult choice “not to have children” is announced This poem gathers chains of images as sadness and resignation are conveyed in lines that resonate metaphorically:

If each parent gives you
a defective gene, you can bake a cake
or crawl across the floor between buckets
of your blood.

It is from gifts of intellectual and creative awareness that a poet can make subtle assertions, even if the gifts have been painfully wrought. Poems in this collection examine emotions of anger, grief, rage, shame and regret, often within careful nature-based metaphors. The poems are rich in description of place and nature that are nonjudgmental and move the collection forward.

It is like a treasure hunt to repeatedly come across words in one poem that resonate elsewhere in another poem, whether adjacent or pages apart. For example, there are references to “jar” in six separate poems, such as the words “Save bruises in jars” in the poem, “During the Wildfires” and the words “Tell me you believe our bodies together make a jar / that can hold light” from the poem “When you first ask if we can have a child.” In much the same way, other words such as: “fire”, “dream”, “baby shoes”, “hair”, “copper”, and “parts” resonate semantically, emotionally, and metaphorically.

Caitlin Scarano offers us beautifully written poems and prose that resonate thematically to convey both narrative and emotion within the poet’s knowledgeable love of the natural world. In the poem, “I know we’re all sick of poems with deer but let me explain,” the following line repeats at the beginning of three stanzas, “Every memory is two-sided.” This is a wise and poignant statement from a collection that is skilled, lyrical, personal, and well worth reading.

← A Blight on the Record of a Dead Man: My Interview with Author Bob Freville
A review of Resistance Is a Blue Spanish Guitar by George Wallace →