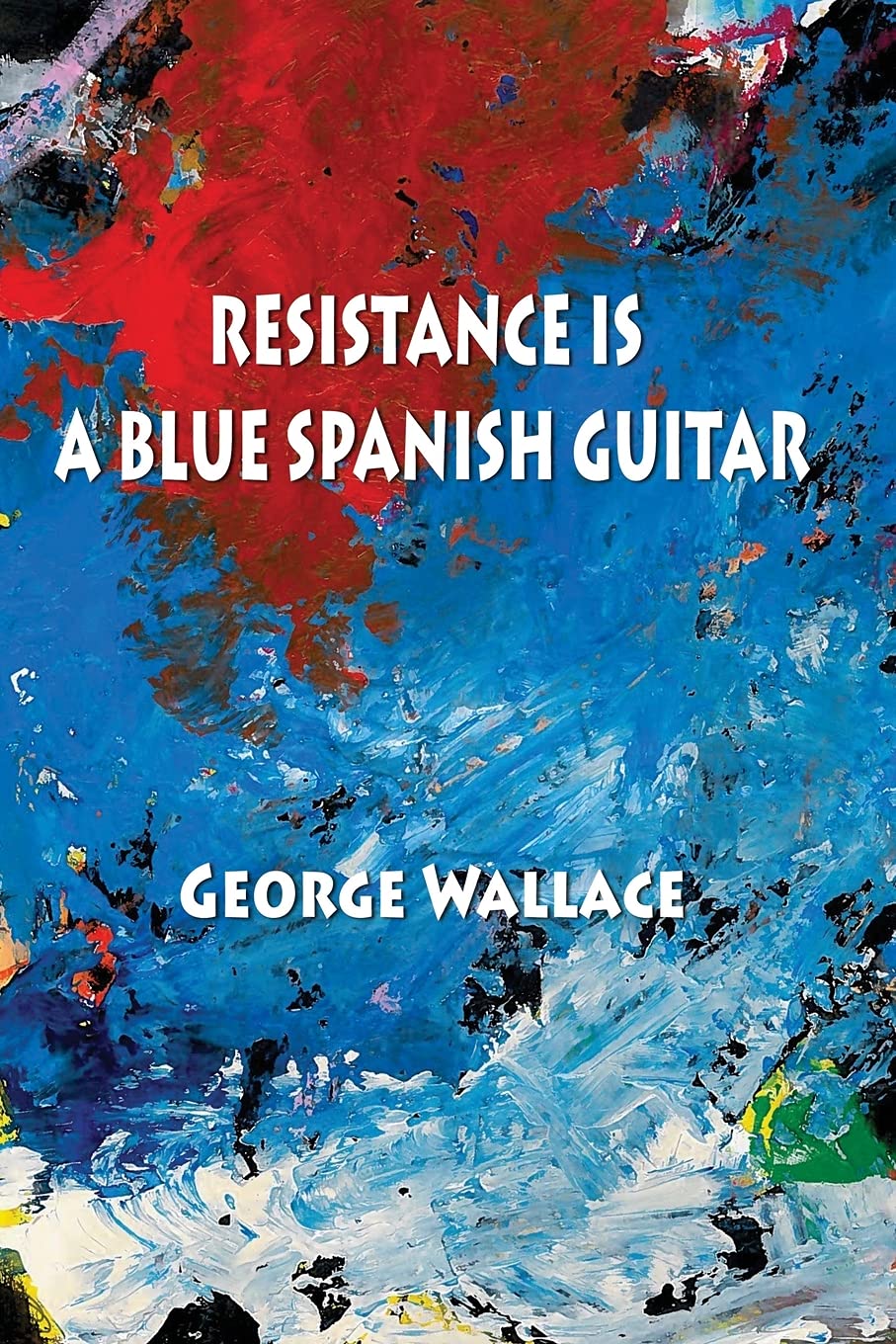 George Wallace’s powerful collection begins and ends with Federico Garcia Lorca, the Spanish poet assassinated by rightwing Nationalist militia in 1936, at the start of the Spanish Civil War.  Resistance is indeed an important theme throughout the book.  “Lorca doesn’t drink here any more,” a sort of lament for the martyred poet, starts it off. “Look down into Lorca’s grave, poet” wraps up the seventy-six-poem collection. Lorca’s remains have never been located, but the message is clear: resistance is at the heart of these meditations.

Resistance Is a Blue Spanish Guitar was published in 2021, which begs the question what Wallace’s response to Russia’s barbaric invasion of Ukraine might be, but of course the answer is obvious. “resistance is the day of reckoning for tycoons and overlords,” he writes in the eponymous prose poem, and later, “injustice is a stolen egg plucked out of warm straw and given to the children of the mighty and nobody to stop it from happening….”

Poem after poem highlights the injustices in our world, from the cruel treatment of immigrant children (“Little child, fisher of dreams,” “Under a tin shed in the tropical rain”), the plight of the Palestinians (“Peace is honey”), to naked political tyranny (“Tear Down The Nazi Flag, Manolis!”) and racism (“So Long Alabama,” “5000 Protesters trapped on a bridge between America and America”). “An American experience” reads:

Forget the Depression, darling
try standing in front of a line
of 21st century riot police
in your birthday suit
carrying a white envelope
full of glitterhearts & stars
chanting Black Lives Matter
under a torn umbrella

But Wallace’s vision goes beyond protest to embrace an ideal America, an ideal world, in the manner of Walt Whitman. Writer in residence at the Walt Whitman Birthplace on Long Island, NY, Wallace refers again and again to Whitman, his lines often long and incantatory in the Whitman style. “I look to my hands and do not complain” begins: “I am like you, Walt Whitman, a vessel to the one soul, imperfect singer in which soul takes passage, mechanical!” And in the manner of Whitman he declares “the idea of America is greater than its errors” (“5000 Protesters…” In this same poem Wallace calls the protesters “American to the core, young and Whitmanic (yes, I say that proudly)”). In the poem, “Dakota” (Wallace writes lush and vivid poems about the American Midwest and Southwest), he writes:

O I am mad
mad as Blake, Ginsberg taught
me how to chant this song and so
did my good gray Uncle Walt; O
read my eyes America I am
talking to you, like Kansas
leafhoppers spoke to Kerouac;
I am a cradle left out in a squall,
I am rocking; the summer rain
which cools you cools me too,
and the lightning which spooks
horses spooks me….

How reminiscent of Whitman’s own “Out of the Cradle Endlessly Rocking,” which begins:

Out of the cradle endlessly rocking,
Out of the mocking-bird’s throat, the musical shuttle,
Out of the Ninth-month midnight….

Wallace employs Whitman’s repetitive incantatory style himself over and over again, in poems like “I Dream of apple blossoms and young fruit, “Chelsea piers, chapel of moonlight,” “Listening to jazz on a rainy bebop afternoon,” and others.

Perhaps the most moving poems in this collection are Wallace’s elegies, including “An Elegy for Steve Dalachinsky,” a Brooklyn-born American downtown New York City poet, who died from a stroke in 2019; “Beat Goddess: for Ruth Weiss,” the Beat poet who escaped Nazi Germany in the 1940’s, who died in 2020; “Ode to Pablo da Rokha,” the Chilean poet whom Wallace calls “Walt Whitman de la Sud”; “If only I could play Faure’s Elegy like Lorna Breen,”  an American physician who was the emergency room director at New York-Presbyterian Hospital and committed suicide in 2020, overwhelmed by the staggering Covid19 pandemic, the parade of deaths; “When Ruth Bader Ginsberg stood,” in honor of the Supreme Court justice who died in 2020, her passion for justice and opera, her heroic advocacy for women’s rights (“it was the opening salvo in a war for women’s rights worthy of opera”).

And speaking of elegies, “Elegy for a small rain forest” is eloquent in its analysis of human greed.

see how they come, relentless as bayonets
see how they come, with drillbits and thirst for money
how they prick the sky, ravenous as children
how like match flames they would burn the earth down to its bare
soil for a moment’s gain….
“Quarantine Days” echoes this assessment.
we traded our souls in, our holy
original animal nature for broad
commerce & civilization (&c do
not forget) it is us who disturbed
the universe turned it all upside
down (yes & our mien to live
unmeasured lives & overstep
boundaries)…

Resistance Is a Blue Spanish Guitar includes several poems that address the horror of the Covid19  plague in New York in 2020. As well as the elegy for Lorna Breen and “Quarantine Days,” “Ambulances are screaming down 7th avenue again” displays the horror. His depiction of the awfulness is visceral, like something out of Daniel Defoe’s Journal of the Plague Year.

Wallace’s voice is compelling and instructive. Parenthetical asides abound, as if he is telling us, in an aside, crucial information to elucidate and amplify his lessons. He can also be funny. “The Real Dookie” is a whimsical poem about the rise and fall of a Beat Poet (“the real dookie”). “Goodbye Angelina” is in the aw-shucks voice of a Texas cowpoke who has been sleeping with the wife of an absent husband. He’s apologetic, explaining he’s a “freedomloving man” –

“I’ve often lost myself,
in order to find the burn that keeps everything awake”

← A review of The Necessity of Wildfire by Caitlin Scarano
A review of Masks: Stories from a Pandemic by Peter Cherches →