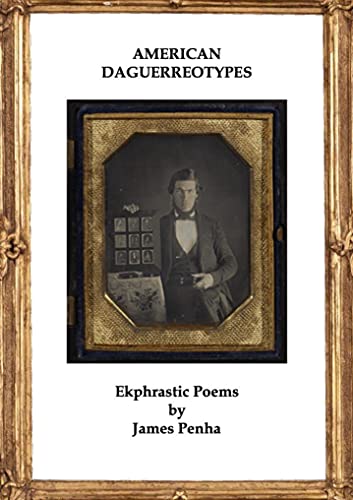 With eighteen poems about the people in the daguerreotypes, ranging from Edgar Allen Poe to Ralph Waldo Emerson, the collection is a keen reflection of history presented in a stylish, creative manner. Subjects also include well-known persons such as Emily Dickinson, Nathaniel Hawthorne, James McNeil Whistler, Henry David Thoreau, Harriet Beecher Stowe, Frederick Douglass, Harriet Tubman, Tom Thumb, among others, as well as three verses about slaves, labeled Caesar 1741, Caesar 1785, and Caesar 1850. Nearly all the poems follow a daguerreotype of a historical figure, most also have a quote from that person or information about him or her, followed by Penha’s poem on the subject. Two of the three Caesar poems about slaves do not have daguerreotypes with them, and these poems are perhaps among the most moving and poignant in this chapbook. Penha has carefully footnoted the history and gives appropriate attribution to the sources of the daguerreotypes in a scholarly manner which does not intrude upon the eloquence of his poetry.

While Penha’s focus might well be among those whose names are known to readers, he also features the infamous Lewis Thornton Powell, aka Lewis Gardner, the would-be assassin of Lincoln’s secretary of state, William Henry Seward, as a poetic subject. On the night of Lincoln’s assassination, Powel attempted to kill Seward but only succeeded in wounding him. The daguerreotype shows Powel in chains but with an oddly calm expression. In his poem, Penha matches his words to that expression and writes:

from whence his calm
despite shackles
and the certainty that
within days a hangman
will replace the photographer
and embrace just so
Lewis Payne’s neck.

A particularly stern, yet somewhat disheveled looking picture of Henry David Thoreau, dated 1856, inspires Penha to refer to Thoreau as a “man / of winds and woods, / walking, …impervious to our eyes.” He concludes that Thoreau “will bathe naked / in the rain and hide in the smoke / of his truths.”

Once more matching his words to a daguerreotype, Penha writes of Harriet Beecher Stowe: “From Harriet’s open hand / …will come reason to fight / the great war…” Another example, in addressing the self-portrait of Robert Cornelius, believed to be the earliest extant American portrait photo, are these excerpted lines: “And so I turn this glass / around and watch / that gleam of light / in me. …/ for in this lens / I create my self.” In crafting a poem about artist James McNeil Whistler, Penha remarks upon Whistler’s flunking out of West Point as “freeing / himself to make not war but art / for art’s sake and spread his own / butterfly wings.”

The poems are uniformly crisp, accessible, and well-written, and tuned to each illustration. All in all, a fascinating and well-done presentation of graphic, history, and poetry in a lovely and unique format. From the intriguing concept to the full-realized poems, this chapbook is a delight to view and read.

Penha, a native New Yorker, lives in Indonesia. He has been nominated for Pushcart Prizes in fiction and poetry, and his essays have appeared in The New York Daily News and The New York Times. Penha edits The New Verse News, an online journal of current-events poetry.

About the reviewer: Claire Hamner Matturro has been a newspaper reporter, a lawyer, and has taught at Florida State University College of Law and University of Oregon School of Law. An author of seven novels, she and her husband live on the Gulf Coast of Florida. Her newest book, Wayward Girls (Red Adept Publishing Aug. 2021), is with co-author Penny Koepsel. Claire remains active in writers’ and environmental groups and is an associate editor at Southern Literary Review. Visit her at www.clairematturro.com

← New giveaway!
A review of The Alphabet of Women edited by Miriam Hechtman →