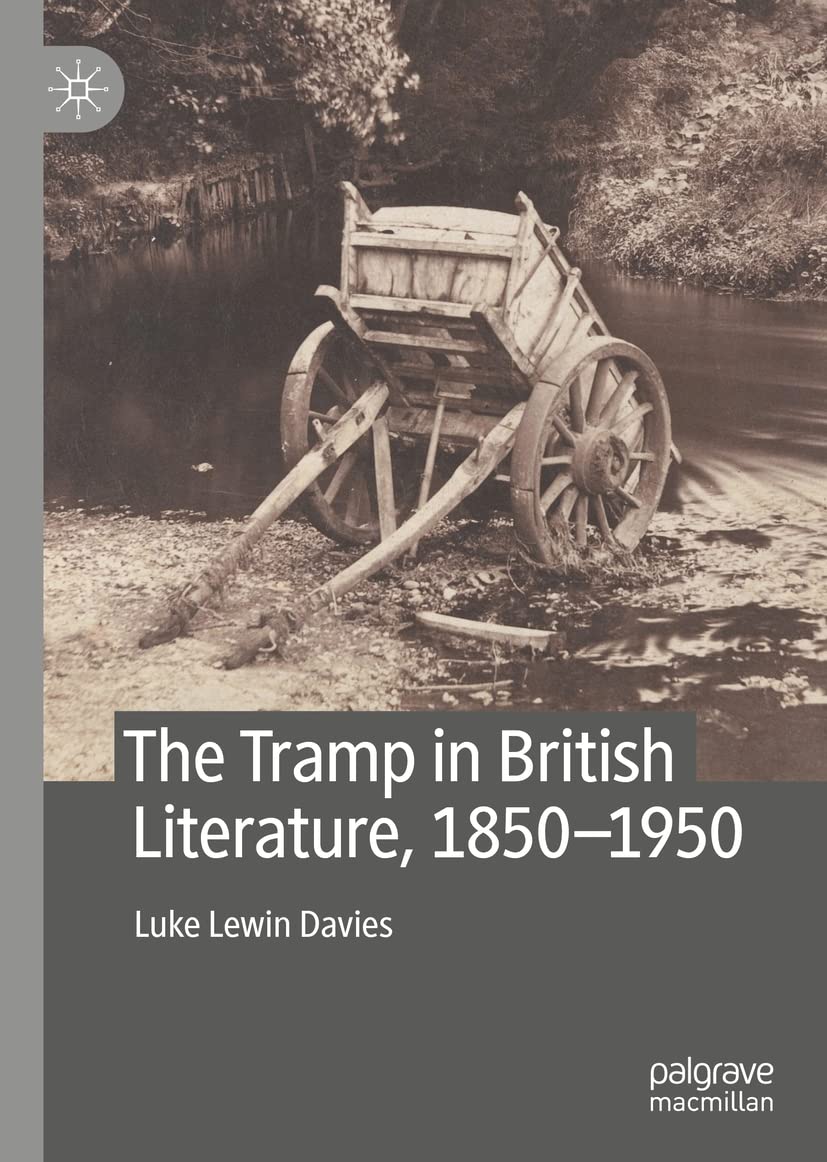 Davies’ book is the most comprehensive text available on tramp fiction, biography and autobiography in the many different forms that Davies presents it. Moreover, in spite of the century announced by the book’s title, it provides detailed references to the history of tramp writing going back to 1500 and beyond. A central theme of the book questions in what way the figure of the tramp might embody and symbolise, “a partial immunity to associated societally produced estrangement effects, from the economic to the everyday to the political.” What Davies sets out to explore, in a way not previously attempted to this extent, is to what extent the phenomenal collection of texts discussed in this volume represent a subversive subculture (or subcultures) developed in opposition to, and alienation from, the hostile ‘civilising’ effects of the mainstream society from which they have emerged.

As well as the surprising number of texts by tramp writers identified in this study, we are also introduced to countless secondary texts exploring the subject not only from a British perspective but the importance of tramp literature globally. Those looking for an introduction to hobohemia and other vagabond sub-cultures in America, socio-philosophical critiques on tramping and wanderlust, political treatise on homelessness, joblessness and the cultural-economic structures that created them, will find all they need and more besides in this single volume. The Tramp in British Literature is essential reading for anyone who wishes to further their knowledge and understanding of this forgotten and much neglected area of writing. As the Introduction promises, this book:

“will explore various ways in which real life and fictional tramps represented in literature on tramping can be seen to have embraced their status as figures on the fringes of society – simultaneously critiquing the causes of their exclusion, and celebrating the opportunities this afforded for investigating alternative ways of life beyond the mainstream.”

Whether or not the reader is a fan of ‘categorisation’, and so long as one appreciates that individual works and authors may cross and inhabit more that one of the following genres, for the purposes of a study as encyclopaedic as this is, the following divisions of the object of Davies’ work greatly assist the reader in navigating the text but also provide evidence of Davies’ endeavour not to omit any relevant text or writer from this study. As Davies himself acknowledges, he is “reluctant to make decisive claims about the genre of tramp literature here before a critical framework is in place.”

As for tramps themselves, Davies cites numerous attempts by other writers to categorise vagabonds, including the early studies of Dr Ben Reitman (1879–1943), American tramp, sociologist, and “whorehouse physician” who classified vagrancy into three main divisions:

“A tramp is a man who doesn’t work … who lives without working and who is constantly traveling. A hobo is a non-skilled, non-employed laborer without money, looking for work. A bum is a man who hangs around a low-class saloon and begs or earns a few pennies a day in order to obtain drink. He is usually inebriate.”

Such categorisations are not always helpful as the same individual might have inhabited any or all three of the above classes of vagrancy at some point of their tramping career, including Jack London to whom conman and university scholar can be added to his modes of existence. Davies is fully aware of these difficulties and contradictions when he acknowledges that, although the texts covered in his study are “works tied to a particular identity”, one should “avoid reading them in terms of how representative they are of the minority group whose experiences they chronicle, but to instead read them in terms of what they say in relation to society as a whole”.

An important distinction explored in Davies’ book is that between the tramp of choice and the tramp of circumstance. Clearly homelessness and tramping for tramping’s sake are not same thing. Indeed some of those who embraced vagabondage—and suffered the significant hardships and deprivation that accompany it—came from comfortable middle class families such as those of George Orwell and Stephen Graham. The book also deals with the fears and prejudices that the tramp evokes in mainstream society. Interestingly, many of the tramp writers referred to in this book turn such prejudices on their head, arguing that it is the lifestyle embraced by the tramp, free from the corruption and hypocrisies of man made laws and conventions (including Christian morality), that is the natural way to live—indeed, an alienation from mainstream society is one of the triggers for the tramping life. And so in contrast to the popular view of the tramp as an immoral character, many of these ‘tramps of choice’ developed their own moral codes, some of which are discussed further below.

One of the most important aspects of tramp literature to bear in mind, certainly as applied to the tramp of choice, is that while tramp writers may share many similar experiences linked to whichever minority group they are most closely associated, they are first and foremost ‘individuals’, exiles from main stream society who do not identify with any societal or political tribe. The same individualism applies to the tramp’s writing voice which transcends more conventional genres and refuses to be straightjacketed by them. Just as the tramp embraces an alternative lifestyle free from the conventions of mainstream society, so too does their writing often reject the usual conventions of literature and the demands of publishers. Not least of these is the delightful habit some writers have to refuse to identify fact from fiction. In the extreme case of Trader Horn, this involved unashamedly fictionalising elements of his autobiography, and embellishing his fictional work with autobiographical references, deliberately teasing his reader in the process. Having said which, where facts about many of these tramp writers are verifiable, they are often more fantastical than those purely fictional or ‘exaggerated’ elements of the text. There is also an honesty—and no small degree of self-deprecation—to many of the texts discussed in Davies’ book that gives them an authenticity lacking in many scholarly works by self-professed experts in their field. Straight forward story telling is often embellished with satire, political diatribe, and even profound philosophical insights that are unique by virtue that these vagabond philosophers lived their philosophy as opposed to acquiring it through book learning. Even so, some were university educated and most were certainly obsessive readers as well as writers.

Having emphasised the individuality of the tramp, there are certain characteristics that many of the tramp writers discussed in Davies’ book do share in common. These are important for a better understanding of this species of writer but also help in identifying a moral code of tramping that contrasts it (not always exclusively) with the values of mainstream society from which the tramp feels alienated: a thirst for adventure and the exotic; a refusal to identify with any tribe yet feeling at home everywhere (cosmopolitanism); the ability to survive hostile circumstances—including starvation, hard labor, beatings, and jail; intelligence and philosophic wisdom; freedom from the tyranny of possessions; a rejection of man-made borders, laws and customs which they consider artificial; freedom also from the restrictions and responsibilities imposed by rules, regulations, and responsibility to family; sharing what little they have with those who have nothing—reciprocated when fortunes were reversed; the ability to enjoy relationships without being bound by them; a lifestyle that embraces the seductions of the “natural” world—living in communion with nature; and the ability to live in the present, taking pleasures now, not deferring them for later.

Davies discusses these, “illicit pleasures to be found in escaping the bounds of conventional morality”. They include a refusal to abandon the innocence and simple pleasures of childhood, which in adulthood can be intensified by indulging in wanderlust—a natural tramping instinct—and experiencing the rare and exotic that children can only read and fantasise about. This is not, of course, to diminish the hardships, miseries and dangers of the tramping life, including beatings and time spent in jail, even if the latter, when a short sentence for vagrancy, could afford relief from cold and hunger. Accounts of long term prison sentences served by tramp writers such as Jim Phelan, significantly augment the more scholarly discussions in Davies’ book on penology (and “resistant subcultures” outside prison) by Foucault and others.

Having published a book on fifteen (American, British and Irish) tramp writers, although devoting an entire chapter to each, after reading Davies’ book I was left feeling that I had only scratched the surface of this fascinating and under researched phenomena (Davies identifies thirty-three British tramp memoirists alone). I will have to read this book more than once to fully appreciate its scope and content, including the countless delightful anecdotes from the subject’s of Davies curiosity. Among other things, this text has left me with a formidable list of book titles that I must now locate and read to further enrich my own appreciation of vagabond literature.

About the reviewer: Ian Cutler is author of The Lives and Extraordinary Adventures of Fifteen Tramp Writers from the Golden Age of Vagabondage (2020), Port Townsend (WA): Feral House