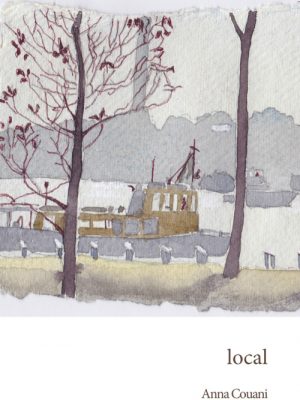 Jon Anderson in Understanding Cultural Geography: Places and Traces, Routledge, 2015 said: “Places come by their meanings and identities as a result of the complex intersections of culture and context that occur within that specific location.” Local, a fascinating book of poetry by the well-known artist and poet Anna Couani is about place. Place in Couani’s poetry is about Sydney and the Inner City and she has the knowledge, the experiences and the connection to allow us to say that she has a ‘sense of place’.  That sense of place not only stems from the poet but also from her parents and grandparents experiences, memories and attachments.  The poem “Earliest Memories” is a clear example of subjective memories or using the cliché ‘walking in her ancestors’ shoes:

my earliest memories of Glebe
my parents’ memories
of first meeting at Sydney Uni
studying medicine
my father recruiting Mum for the Labor Club
bastion of progressive politics
a heady mix of ideology and romance
Mum lived with her sister in as rooming’ house
in Arundel Street
run by Miss Sherack, the hoarder
of Depression era handkerchiefs, men’s underwear
and walks
common Glebe pastime
walk to the city, walk to Paddington
walks through the Uni especially
my own feet trading the same footpaths
30 years later
down all the way to the water

Anna Couani’s artwork illustrates local. Her life as an artist is also married to her poetry, evident in many of her poems. The joy of mixing with other inner-city writers and artists is also apparent in the poetry as is the fact that artists and poets are never too far from politics. The past of the inner city, how it was and how it is, is brought to light … nostalgia? … loss? … anger? is all made clear in the following excerpt from the poem titled “ibis sanctuary”:

Couani, in her entertaining narrative poetry, sees, reflects, describes, ponders and imagines. Vivid images, poignant lines, and a sense of balance moves the reader from place to place. The poet gives a voice to images. It impressed me how she is able to bring the personal into the poetry without sentimentality. The following poem titled “the flats in Leichhardt Street” illustrates this but also the strength and determination of the writer:

escaped from family trauma
dropped out of Uni, age 20
out of 4th year Architecture
a soft landing with my gentle partner
in hard places
finally found the flat with the dark blue lounge room
just near the old mansion
down in Leichhardt Street
that wound down to the water
turning off Glebe Point Road
exactly where the taxis do a U-turn
as I had done three years before
driving taxis out of the Red Deluxe depot
in Kings Cross

The last poems in the book are titled “ideas for novels” and go from 1 to 10. In these poems the reader enters moments, fragments of time, the land, life and culture. In local Couani gives a voice to images and place, she is an observer, a witness, the reader will be absorbed in her poetry. local is a ‘must read’!

About the reviewer Dr Beatriz Copello is a former member of NSW Writers Centre Management Committee, writes poetry, reviews, fiction and plays. The authors poetry books are: Women Souls and Shadows, Meditations At the Edge of a Dream, Under the Gums Long Shade, and Lo Irrevocable del Halcon (In Spanish), fiction books are A Call to the Star and Forbidden Steps Under the Wisteria. Copello’s poetry has been published in literary journals such as Southerly and Australian Women’s Book Review and in many feminist publications.  She has read her poetry at events organised by the Sydney Writers Festival, the NSW Writers Centre, the Multicultural Arts Alliance, Refugee Week Committee, Humboldt University (USA), Ubud (Bali) Writers Festival.