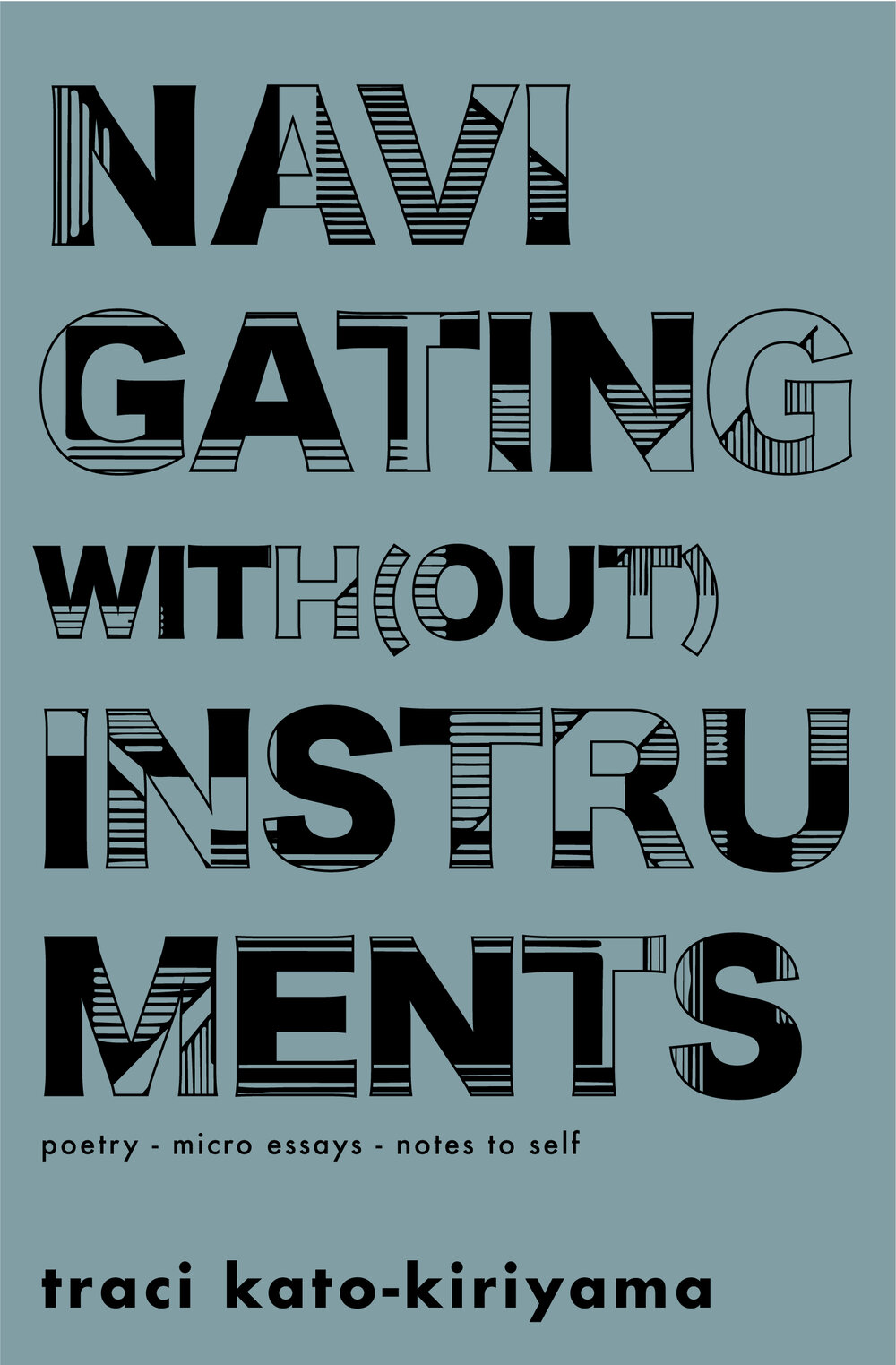 In Navigating With(out) Instruments, artist and activist traci kato-kiriyama opens their book of poems, micro essays, and notes to self, with a poem titled “Warning.” It repeats the same sentence six times creating a haunting echo: “warning/a book/of/poetry/is/a/trigger.” Before the book officially begins, the reader knows their poetic philosophy, that poetry’s to confront the hardest truths, personal, political, racial, communal, and familial.

Immediately, in section one titled “ICON 1: Have Abandoned Plane, Walking in this Direction,” the book inhabits this philosophy to confront. kato-kiriyama has reached her 30s, and it’s the time in a woman’s life to have children before it’s too late. That’s still society’s expectation, that women are nurturers to others, not autonomous beings.

It begins with kato-kiriyama’s decision not to have kids, that they make clear they are chronicling their nontraditional path in life. By pushing back against society’s bombardment of parental images—“stop sending paper infants to my doorbell…//cease your tapping/we’re a house of cats,” in the poem “My Periodic Wavering On Pregnancy, circa my 30-something years”—the reader sees a woman of color determined to make her own life, not have it made for her.

This notion expands, as kato-kiriyama ponders in the set of Notes To…, at the end of “ICON 1,” if the memory of the individual and their community can “be passed on outside of the vessel of/DNA.” If so, can the individual/kato-kiriyama, who doesn’t have kids, create a “a pan-generational consciousness/through the past, present, and future in concert with each/other,” if not expressed? kato-kiriyama makes a convincing argument in the negative, as they explicitly express their pan-generational consciousness throughout.

In each section titled “ICON,” kato-kiriyama confronts a different part of their life. They function, in a way, to give the collection a more recognizable structure, grouping related poems, Notes To Self, Country, World, etc., and occasionally micro essays, by categories, whether they be a specific period in their life such as ICON 1, or issue, like family and communal history in ICONs 3 and 4, or other categories that play off of the book’s title, such as “ICON 5: Quinine and Atabrine.” It works structuring the book this way because it mirrors how the mind functions in creating some type of order in which to understand new and/or complex and difficult perspectives, information, or understandings. And though sometimes the categories can be frustrating to understand (how do these poems and notes fit together in this section?), at least at first, that aspect mirrors the mind groping for a way to understand the information presented—like going in blind—before it has the information to accomplish an understanding.

Some of these “ICONs” confront kato-kiriyama’s familial and communal Japanese American histories that have left an indelible mark on the Southern California landscape, that’s had a prominent diasporic Japanese community for over a century. In “ICON 3: Need Warm Clothing” kato-kiriyama presents the book’s longest poem “SERIAL MEMORY – for Grandpa” that spans the time period from the 1950s to ostensibly, the present day, encompasses personal, family, and communal history. It begins with place, off the 405’s Crenshaw exit, in Torrance’s North Torrance neighborhood, where their grandpa owned a nursery, and kato-kiriyama and their mother grew up among the city’s large Japanese American community. Immediately they recount family and communal (U.S.) history directly, no rosy glasses clouding the factual truth.

3. The exact point where the government told
Grandpa
he would be removed from his life at their whim
he understood Eminent Domain would be explained by
muscle memory – like concentration, exclusion, war

Their grandpa loses everything—his life—for the second decade in a row, making way for the 405 Freeway. History repeats itself like the removal to concentration camps for America’s Japanese that kato-kiriyama hauntingly alludes back to in the excerpt’s last line.

Later, kato-kiriyama effectively builds on this knowledge and the human focus, making new connections that create a more complete understanding of how they, their now wider family, and community (specifically Little Toyko), are, and how they are treated. She incorporates information such as “This city is not obvious…//You might not parachute here/and land in amiable loveliness…//You will need/people,” which on the surface, is about how outsiders stereotype Los Ángeles, not about navigating their traumatic journey. However, the focus remains on the human understanding, too often absent in discussions about L.Á., that in turn, prevents her from being rendered invisible. Also, the reader can make more comprehensive connections on their own, about how trauma and erasure weigh on people, to mirror the process of how people expand their knowledge in the navigation of traumatic journeys.

This creates densely layered poems that demand a careful, slow read, that at times can be frustrating. In several of the “ICONs,” the opening poems are vague, belying kato-kiriyama’s philosophy to confront and be direct. It was harder to move on to the next poem because I was sure I was missing some information that, without it, would create information gaps later. At the same time, I felt I didn’t have enough information to understand the poem at hand, that I needed to proceed to acquire the information I lacked. Yet, in these ICONs final poems, several lines or themes are repeated with the acquisition of new information, illustrating how important a clear, fleshed out, understanding is. This frustration is part of the journey.

However, like all collections, there is always at least one piece that stands out as bad and/or doesn’t fit and Navigating With(out) Instruments is no different. The second N.T.S. in “ICON 6” and the N.T.M.G.Z.F. in “ICON 7” are such pieces. The N.T.S. has an unusually light tone and, on the surface, is about eggs, a seemingly frivolous topic in comparison to the rest of the book, especially when turned into a song. The N.T.M.G.Z.F. is forgettable, unlike other N.T.s, because it doesn’t add anything to the poem it comments on, or to the book. These are two brief blips, in an otherwise necessary collection.

Time and again, kato-kiriyama pushes the reader to continue their hard work to understand and enact her “pan-generational consciousness.” The arts activism to build community in ICON 6; the call to treat all humans with utmost empathy, always, in ICON 9’s N.T.S.; kato-kiriyama speaking aloud her queer identity to “the curious Uncle or Auntie” who doesn’t quite understand and ICON 10’s N.T.S. reminder that “I am a little crazy./This is very normal,” living this nontraditional life to confront, take action, and heal through her Japanese American Angeleño identity. In every way. Navigating With(out) Instruments proves traci kato-kiriyama’s consciousness can “seep into…other’s bones” without having children. Just speak, confront, connect.

About the reviewer: Brian Dunlap is a native Angeleño who still lives in Los Ángeles. He explores and captures the city’s stories that are hidden in plain sight. He is the author of the chapbook Concrete Paradise (Finishing Line Press, 2018). Dunlap is the winner of a Jeff Marks Memorial Poetry Prize from december magazine judged by former Los Ángeles Poet Laureate Luis J. Rodriguez. HIs poems, book reviews and nonfiction have been published in PacificREVIEW, California Quarterly, Lit Pub, L.A. Parent and Tropics of Meta, among others. He runs the blog site www.losangelesliterature.wordpress.com, a resource to explore L.A.’s vast literary culture.