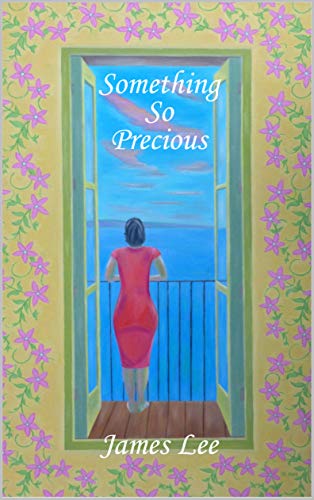 Reflecting on everything that has happened, it all feels so perfect: an education; a journey; and, like a warm summer’s breeze sweeping through a thousand prison cells, a glimpse of something so precious – freedom.

So culminates this bijou tour de force by James Lee, tracing a fascinating narrative of interwoven lives, checkered with romance, loss and self-realisation.

Something So Precious is a novella that explores at once the thrill of youth, suffocation of legacy, the secrets families keep and the elusive nature of desire. Some of the prose would not seem out of place in a novel by Anaïs Nin, as it delves deftly into the intricacies of love affairs with both realism, poetic lyricism and philosophical musing. I mention Nin in particular because she was a visionary in femme erotica and Lee’s prose, for a male writer, not unlike Pedro Almodóvar’s films, touched me for its understanding of femme desire. Just as Almodóvar‘s work openly reprimands Hollywood’s two-dimensional portrayal of many women, this book creates rare space for strong femme characters Freya and Phoebe, who rebel against tightly entrenched gender and class roles.

Before the introduction of these embodied, powerful female characters, Lee opens the book from the perspective of a teenage boy protagonist, Tom, who is holidaying on the South coast of France with his family. The first few pages, prefaced, ‘South of France, Summer 1984’, build the private history of Tom, which echoes into the love affair he and Freya have years after, as adults.  We are introduced to Tom’s wealthy family and with that, the machismo of the ‘money, money, money’ political climate in which he is raised, with banking empires growing under Thatcherite rule. Underneath the prose and within its seething yet subtle dialogue, the triple tensions of culture (permissiveness of France versus England), class (as mines are shut while bankers burgeon with bonuses) and sexuality (as Tom has his first, ill-starred but fervent romance). This background is an important precedent to the later chapters mapping the crossing of paths of Tom and Freya and the plot only thickens but is lushly filled with the real flesh, frisson and heartache of life.

The second part of the novel is set in 1997, the fateful year when a toxic English obsession with the trope of the ‘fallen woman’ manifested in the tragic death of Princess Diana.  At the same time, we have two passionate female protagonists who challenge this. Freya moves away from the constraints of academia and a relationship with an ‘insecure man’ to discover herself. Phoebe is a free-spirited, tarot reading traveler who serendipitously finds herself modeling for Alexander McQueen. The dual potentialities of liberation and objectification in the fashion industry are explored as Phoebe navigates this world. One thing is clear: through the development of the narrative, the women in this book will not be forced into convention and compliance like generations before. They are vibrant, questioning women ready to seize their own lives and live for themselves.  Lee creates a beautiful narrative voice in the form of Freya; protagonist for the majority of the book. Freya’s insights into her messy engagement, her artistic high-achieving milieu and her infatuation with romance are funny, profound and relatable.

“I’m more interested in concepts like beauty and freedom – and in philosophy”, she soliloquises halfway through the novel. Indeed, the story is replete with lustrous moments of beauty, where Freya goes on half-introspective poetic rambles around the grounds of her family manor in Cornwall, Saffron Hall, as she is trying to piece together for herself the life that she wants and loves. Her desire is detailed in stream of consciousness style, seamlessly intruding over the course of the narrative:

Once again, I am reminded of Nin’s words:

‘What a mystery this is, desire.’

Towards the end of the book, Freya’s therapy appointments and a first love affair with another woman are diarised; an ‘empowering’ experience, to borrow her words. Lee successfully builds Freya into a self-liberated woman, who seems to follow Nin’s famous maxim:

‘Life shrinks or expands in proportion to one’s courage.’

And of course, it does. This is an engrossing and inspiring book for anyone who needs reminding that life is a journey that can take the most unexpected turns, and that in itself is ‘something so precious’.

About the reviewer: Leila Lois is a dancer and writer of Kurdish and Celtic heritage who has lived most of her life in Aotearoa. In her poems, Leila explores a personal sense of origin that, like the ocean, binds several landscapes and times, coming back to the idea that a timeless, boundless love pervades. Her publishing history includes Southerly Journal, Djed Press, NoD Literary Journal, Honey Lit Journal, Mayhem Journal, Lite Lit One, Bent Street Journal and Delving into Dance. Find out more at: https://dialogicaldance.wordpress.com or at Twitter: leilaboos

← A review of With by Kenning JP Garcia
A Nontraditional Life: Navigating With(out) Instruments by traci kato-kiriyama →