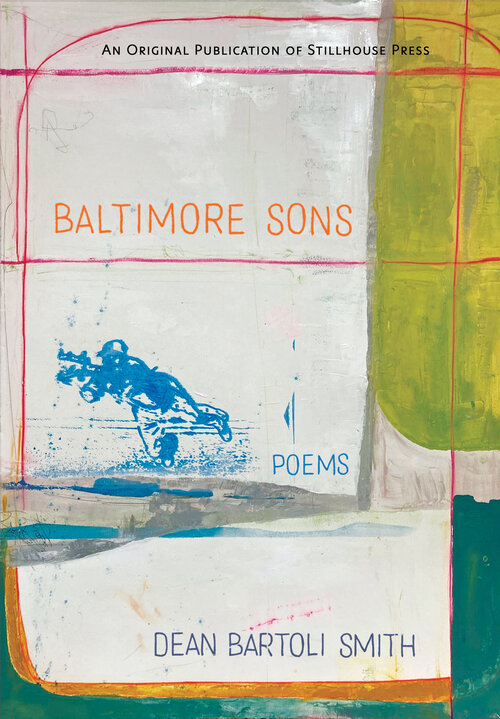 A profound nostalgia, both personal and cultural, saturates Dean Bartoli Smith’s spare, elegiac poems, which deal generally with America’s fascination with guns. In a poem called “Empty the Chamber,” which takes place at a shooting range, he writes:

My father shows me paper targets riddled
with holes—obliterated faces and hearts.
He grew up in Baltimore; he will make
someone pay for its ruin.

For Baltimore has faded from its glory days, whenever those were. Some might say it was the nineteenth century, when Francis Scott Key and Edgar Allan Poe roamed the streets and major political parties held their nominating conventions in Baltimore. Smith’s nostalgia is for the sports heyday of the 1960’s when Unitas and the Colts ruled football and the Orioles were always in contention, and the NBA Bullets hadn’t yet left town for Washington.  In any case, as he writes in “Trash Night, Guilford”: “the city’s gone to the dogs.” The poem “Pistol Range” continues the theme:

Today, he takes the law
into his own hands.
Not a policeman or a soldier,

but a disgruntled son
out for revenge. He utters
a list of citations against a father

who guzzled money saved
for Christmas presents,
who cheated on his mother

as she lay dying of lung cancer.
He kills him over and over,
enjoying every moment.

Pop-pop bragged
about the sawn-off shotgun
he kept in his lap
while driving a potato chip truck
in case anyone got funny with him
during the riots of ’68.

mostly with handguns,
the weapon of choice,
obtained illegally,

muscling in on
or defending turf
or retaliating for past acts,

The situation is recognizable to anybody who has watched David Simon’s HBO series, The Wire (to which Smith alludes in the poem, “Riots”). The poem “McKenzie” is about the three-year-old victim of a drive-by shooting. But America’s fascination with guns goes way beyond this. In poems like “Six Shooter” and “Outlaw” and “Ordnance” and “Cap Guns,” Smith writes about the casual way in which guns and retribution fantasies play a part in childhood. In “Cap Guns” he writes:

with bandanas over our mouths,
yelling, “This is a stickup!”

Brendan and I, officers
Reed and Malloy

across the hoods
of imaginary squad cars

yelling “Hold it!” and “Come out
with your hands up!”

Smith also writes about a broken childhood, conceived in the backseat of a ‘58 Thunderbird, Irish-American father and Italian-American mother (“Shotgun”: “I was conceived by mistake / in the back seat of a royal blue Thunderbird”). To traffic in stereotypes, Smith combines an Irish sentimentality with shitkicking Italian bravado throughout Baltimore Sons. Indeed, Smith himself wryly writes in “Pure Shooter”:

In “Cash for Guns, 1975” he writes about his father’s Remington deer rifle, “Before the divorce I’d sneak / into my parents’ closet, unzip / the rawhide sleeve and lift / the rifle out.” The poem ends:

Dad was behind
on his child support.
He needed fifty bucks
for food. I watched him walk
slowly to the police station,
cradling the rifle like a son.

In place of the dysfunctional family, then, the world of sports stars fills the void. In poems like “Unseld” “Sportswriter” and “Memorial Stadium” Smith writes about the local teams and players and how much they meant. The poem “Final Out” is a sweet elegy for the star Orioles pitcher Mike Flanagan, who committed suicide – with a gun – in 2011. In “Memorial Stadium” he writes:

The Orioles eked out victories in bushels,
with all of us part of a makeshift family,
and we loved each other from all over town
in “The World’s Largest Outdoor Insane Asylum,”
huddled together in the bitter December air
to watch the Colts rise on their back hooves
in response to a bestial din boiling over:
a doomed and obsessive love affair
between a city and its heroes
created an unbroken family
of Black and white stars…

It is mainly the first part of the Baltimore Sons that spotlights Baltimore. In Part II Smith widens the lens, while still focusing on guns, violence and injustice. “Gwendolyn and Freddie” takes off from the 2015 police murder of Freddie Gray and the civil unrest that followed but the emphasis is on the racial inequality, just as poems like “Reading James Baldwin on Election Day in Charleston,” “Lieutenant Fox,” “Something to Cool You Off,” “Decoys” and “Eady Does the Eagle Rock,” a poem about the shabby treatment of the poet Cornelius Eady in a Chicago restaurant, likewise do.

a bad man, just inclined toward freelance
law enforcement, a fan of The Lone Ranger,
and afraid that society as we know it is coming
unhinged, and it makes him feel better
to turn the pistol on the target of his anger.
I’m just afraid that I will be used to shoot
an unarmed stranger, and then be blamed,
which couldn’t be further from the truth.

“Shooting Gallery” is a poem that takes on the gun violence at Sandy Hook and at Virginia Tech and elsewhere, and “Delivery Room” is about the birth of child – Smith’s daughter Julia – during the pointless violence of the Iraq War, kids “from Kansas, Oklahoma and Michigan” killed in “Basra, Najaf, Tikrit.”

In addition to his elegy for Mike Flanagan, Smith writes another, “One Blow to the Brain,” for another gun suicide, the young writer Breece D’J Pancake.

But Smith saves his most moving elegies for his mother.  “The Viewing” takes place after his mother’s death, but it’s the final three poems that address the grief.  “Misericordia Blues” starts:

I played a concert for the ghost of my mother
three days after her death in the room
where she lay dying for five days,

And later in the poem Smith remembers playing songs for her while she lived.

Sometimes I cried while singing the songs
because death was not a word I associated with her.
She loved “Bobby Dylan” so I played “Tangled Up in Blue”

and “Forever Young” and Neil Young’s
“Cowgirl in the Sand” and “Ambulance Blues”
for the Italian Health Service, with its paramedics

in sky blue and gold Thunderbird suits, who arrived late
on her last day, only to dump her into the chaos
of an emergency room with the word for mercy—

“misericordia”—emblazoned on their truck.
She held my hand and my brother’s and said,
“We sure fucked this one up, didn’t we?”

“Warrior,” which follows, is addressed to his mother, at her deathbed,

with your boys
gathered around

the headboard
and you, a long way

from Iris Avenue
in East Baltimore

And in the final poem, called “Three Poems of Departure on Route 96,” he reflects on his mother, her life, her passing. The poem and book end on the line: “This is when I knew.”

The melancholy reminiscence at the heart of Baltimore Sons is affecting and admirable. The reader joins in the horrors and sadness with a cathartic response.