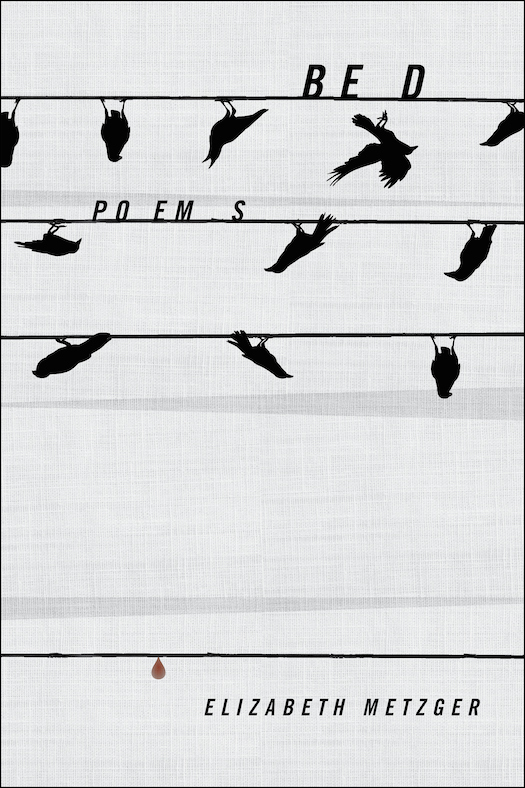 There is a loneliness to the poems in Bed. A plea to find oneself, to discover where to go, yet there is an isolation that frames the lines in this chapbook. The author, Elizabeth Metzger, conceived the poems while bed-ridden due to two difficult pregnancies.

Consider the bed as a place where we spend a good portion of our lives. We sleep and dream, are intimate in it with ourselves or with partners, give birth in it, die in it. There is joy and there is sadness. We also do the mundane in it: reading, watching television, communicating on smart phones. The bed is a central part of our lives that in many ways we take for granted.

Within the spare and taut words, the compact lines that the author fashions in her poetry are found grief, love, intimacy, spirituality, death, yet an emotional distance and mystery (lots of it). In fact, it is mystery that has kept this reviewer off-balance throughout the book, as in the lines: “Wind from nowhere / It did not get up / from its snoring carriage / or offer me a bottled / sense of the near future.” Her lines are simple, their meaning complex. Close reading is required to get to the hub of each poem; if there is a hub. As Metzger writes, “I stayed off center”, echoing the words of Gertrude Stein who declared, “There is no use in a center.”

Also, there are lives wished for but not wanted, as in her poem “Won Exit”: “In one or two lives / I opened the door with the prize / only to find the prize was not worth the life” or, lives wished for and wanted as in this offering from, “You’ve Been on Earth So Long Already”: “All my life all I’ve wanted was to be myself / and someone else. Not theirs but them.”

There are expectations not met:
Once there was nobody left to love
a family had me

My mother made a steeple with her hands
that folded open to reveal no people.

In the example of this simple little game that parents play with their children perhaps at bedtime, the disappointment the child feels towards the mother is almost palpable, isn’t it? Or, could it be that this is a teaching moment for the child that says she should not expect a perfect world; that things are not always as they appear.

There are thoughts of leaving this earth:

Of everyone I’ve met

on earth I always find
they got here first

and will they teach me
their good reason for staying?

There is not the implication of taking one’s own life here, just the thought that the people she has met are of an age older (and perhaps wiser) who she can ask, or who may be able to ”teach” her the advantages of why she should stay. That Metzger uses “earth” assumes another place where one can go. A place that is perhaps less disappointing. Maybe a place of spirituality. The matter-of-fact use of the word “staying”, an innocuous term in this context, is also an indication of the weight given to the thought

There is an epiphany of isolation:

The above lines are from her poem “The God Incentive”. There is religious context here. The isolation is from perhaps having been brought up in a home where religion is important. Where the image of a god has been used to protect (indoctrinate) the child.  But the child, now an adult, keeps “him a theory / but bring him down / once in a while” like the rain.

But, are not the author’s experiences deftly put into words similar to all who toil on this planet? Those who deal in the day to day grind of life, swallowing the grit shoved at them by others. Have they not thought these thoughts, felt these emotions at some point? To say no is to be lying to oneself or to be a Pollyanna. Metzger brings out the truth of who we are, what we feel in our secret heart.

About the reviewer: Michael Kleiza was born in Montreal, and now lives in Guelph with his partner Susan Kelly. Michael’s poems have been published in various anthologies and magazines. His poem “Remembrance Song” was chosen as a finalist for the William Collins Canadian Poetry Prize presented by Descant magazine. He has read his poetry at many venues, including The Fringe of the Eden Mills Writers’ Festival, the Hillside Festival and the Art Bar in Toronto. He is an alumnus of the Wired Writing program at the Banff Centre for Creativity and Innovation in Alberta. His debut collection of poetry, A Poet on the Moon, was published by Vocamus Press in 2015.