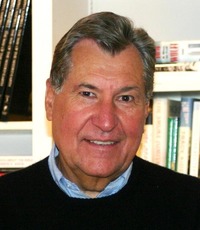 Why do so few people today know about the millions of people imprisoned around the world between 1939 and 1945, especially about the American citizens held in POW camps right here in America?

There are several reasons. First, most Americans who were old enough to have observed POWs in our country are no longer living. Second, by 1946, every POW had left America, taking their records with them. In addition, POWs were imprisoned in camps near small towns with little national press coverage. And few history books, following the war, included this event.

You’ve been fascinated by World War II POWs your entire life. How did the United States enter into the POW business?

In 1943, Americans landed in North Africa to join the British who were fighting there and had captured many Germans and Italians. The British had few materials to construct POW camps and couldn’t spare men to guard them. So, the United States agreed to take custody of 50,000 POWs. They were shipped back to America on the empty Liberty ships that had just off-loaded American troops and equipment in Algeria and Morocco.

The United States had no facilities to house prisoners in America because our primary focus was on the build-up of our armed forces. But, within weeks, a construction program for POW camps was submitted to the Joint Chiefs of Staff. These camps were to be built on American military bases and on the hundreds of abandoned Civilian Conservation Corps camps.

In the 1940s, small towns across America, such as my hometown of Owosso, Michigan, were among the 940 American communities where permanent POW base camps and branch camps were established.

To prevent mass escapes, the prisoners were dispersed widely in 155 base camps and 785 branch camps located all over the country, at least 170 miles from the coast and 150 miles from the Canadian and Mexican borders.

You mentioned a POW camp in your hometown of Owosso, Michigan. Tell us about it.

In 1944, when I was 5 years old, a German POW branch camp for 2,000 POWs was established on the grounds of an auto racetrack about four miles west of Owosso. The camp was about 100 yards square and was surrounded by two (inside and outside) high, barbed wire fences with watch towers.

On Sundays after church, Owosso citizens drove their families out to the camp and slowly drove around the perimeter to observe the German POWs inside.

The POWs were housed in large tents. They lived there from spring until winter, working on farms and in factories in the area. In the winter months, they returned to their base camp near Kalamazoo, Michigan.

How did you become interested in the subject of POWs in America?

When I was in grade school, my best friend, Billy Curtis, and I took a shortcut through the parking lot of a canning factory in our neighborhood. On our way to school, we observed German POWs unloading truckloads of fruits and vegetables and carrying them into the factory where they were processed into cans or jars of fruit and vegetables.

The vast majority of our POWs were young men who seemed to be having the time of their lives. They befriended us and, in a way, we became like their younger brothers. They even invited us into the canning factory to join them for lunch in their dining hall, of course with the consent of the Army guards who were armed with submachine guns.

We loved being accepted by this group of smiling, blond haired, and blue-eyed young men. This experience began my lifelong interest in POWs.

In the 1980s, as an expert on the subject of corporate information technology, I was invited to consult to many European companies. On two occasions, I met high level executives who were eager to discuss the times they had experienced as POWs in America.

When you were a young boy, was your perception of Germans influenced by seeing these POWs working in your community?

Yes. Owosso had a significant number of German immigrants, so we were used to being among them. But the presence of German POWs enhanced our positive impressions of Germans in general.

The vast majority of prisoners in POW camps were enlisted men. According to the Geneva Convention, they were required to work. However, that work could not be demeaning, dangerous or defense-related. Prisoners worked the same hours as their American counterparts, eight hours a day and six days a week, in jobs such as farming, forestry, and food processing. And, POWs were paid for their work. But what was life like for an imprisoned officer?

Some German officers in American POW camps volunteered to do manual labor, just to keep in shape and pass the time.

All officers were provided fine quarters, a garden, and an American, German-speaking GI to assist them. They were also served better food than the enlisted POWs. Officers were even provided a car, driven by their GI, to tour the countryside. But they had to swear not to attempt to escape. Of the hundreds of German officers imprisoned, none ever attempted to escape.

In short, because of the fine treatment, most POW officers rather enjoyed their stay In America. Needless to say, the Germans preferred being in an American POW camp to fighting Russians in the dead of winter. And we acquired much information from the personal GIs assigned to them.

You’ve talked about how German POWs were treated here in the United States, but how were American POWs treated in German POW Camps?

Germany was our only WWII enemy to sign the Geneva Convention. This document spelled out how enemy POWs were to be treated. Japan and Italy did not sign. On balance American POWs in German camps were treated very well as compared to Americans held in Japanese camps. Unfortunately, when it appeared that Germany was losing the war, treatment of our POWs there worsened considerably.

Yes. This was tragic. A War Relocation Authority was established. Its mission was – and I quote – “to take all people of Japanese descent into custody, surround them with troops, prevent them from buying land, and return them to their former homes at the close of the war.”

On March 28, 1942, these Japanese Americans were forced to sell their property within two weeks. Many of them were business professionals, doctors, and lawyers.

Conditions at the camps were sparse. They were forced to live in uninsulated barracks furnished with only cots and coal-burning stoves. Residents used common bathroom and laundry facilities. Hot water was usually limited.

They set up schools, churches, farms, and newspapers. Children played sports and engaged in various activities. These Japanese-Americans spent as long as three years living in the camps.

Finally, in December 1944, internees could return to their homes, but most remained in the camps for another year because of anti-Japanese sentiment in America. About 55,000 returned to life outside the barbed wire. Those who returned to the West Coast found their property vandalized, farms gone to seed, and businesses bankrupt.

What was it like growing up in Owosso during the war? Everyone had to sacrifice for the war effort. Did you feel deprived?

As a young boy, growing up in America during the war was exciting, but we had to adjust to shortages of food and clothing. Food was rationed since we were feeding our military and POWs here and in Europe and Asia. Because clothing factories were converted to produce clothing for our military and for POWs, civilian clothing was also rationed. And there were no new toys or bicycles because those factories were converted to produce war materials.

Yes, all American families sacrificed, but we never lost sight of the fact that these sacrifices were necessary for us to win the war. After all, every family in my neighborhood had one or two members serving in the armed forces.

Is there anything that you experienced during the war years that you miss today?

I miss the spontaneous expressions of patriotism and the love and respect for our fellow citizens as it existed during the war. Everyone sacrificed and no one complained about it. We were all extremely proud to do so.

Watching classic movies is a passion of yours. Are movies about POWs mentioned in your book?

During the war, American movie theaters showed newsreels featuring the latest progress of the war in Europe and the Pacific. All Americans were very interested, because most had fathers, uncles, brothers, and cousins fighting the Germans or the Japanese at the time. Many Hollywood movies featured storylines about the war, including POWs and their camps.

One of my favorite POW films is “The Great Escape,” based on Paul Brickhill’s nonfiction book. This is a first-hand account of a mass escape of British and American prisoners from German POW Stalag Luft III in the province of Lower Silesia, Nazi Germany. Actual events are depicted in this best POW camp escape movie. I won’t tell you how many times I have watched this gem that stars Steve McQueen, James Garner, and Richard Attenborough.

You have devoted your life to writing over the past two decades. What advice would you give aspiring writers?

It’s been extremely hard work but worth every drop of perspiration that has fallen from my brow.

Positive and enthusiastic feedback from my readers is more than I ever thought I would be fortunate enough to enjoy during these last years of my life.

My advice to aspiring authors: Don’t sell yourself short. I never had any idea that I would be a respected author of eight books, both fiction and non-fiction. Simply put, don’t underestimate your ability until you’ve given it good try.

You and your wife, Joanne, collaborated on all of your books. How did you divide up the responsibilities to produce these books?

First of all, Joanne is extremely intelligent and very meticulous. She was an English major in college, taught English for 10 years, and is a voracious reader.

Joanne relieves me of an author’s tasks that don’t appeal to me. She takes my draft manuscripts and then studies, corrects, and improves them. She works with our agent and publisher to produce these works of art. Then, she promotes and schedules my book events. Finally, she handles book sales and financial transactions.

After having described all this, you might ask me, “just what do you do?”

You and your wife have been a team in a very successful business career spanning many decades. What is the secret to the success of your partnership?

The most important ingredient is that we completely trust each other, and we have learned over the years how to divide the work in a way that takes advantage of each of our strong suits. But most importantly we both love and like each other.

You often write about Owosso. Have you ever considered moving from Nashville back to Michigan?

Absolutely not. After graduating from the University of Michigan, I spent the better part of a decade as a naval officer on ships homeported in warm climates, like Key West and Norfolk, Virginia. Before moving to Nashville, we lived many years in Naples, Florida. We sometimes wonder why we moved way up here to Nashville. But going back to Michigan? The idea literally sends chills up my spine.

← New giveaway!
A review of The Breath by Cindy Savett →