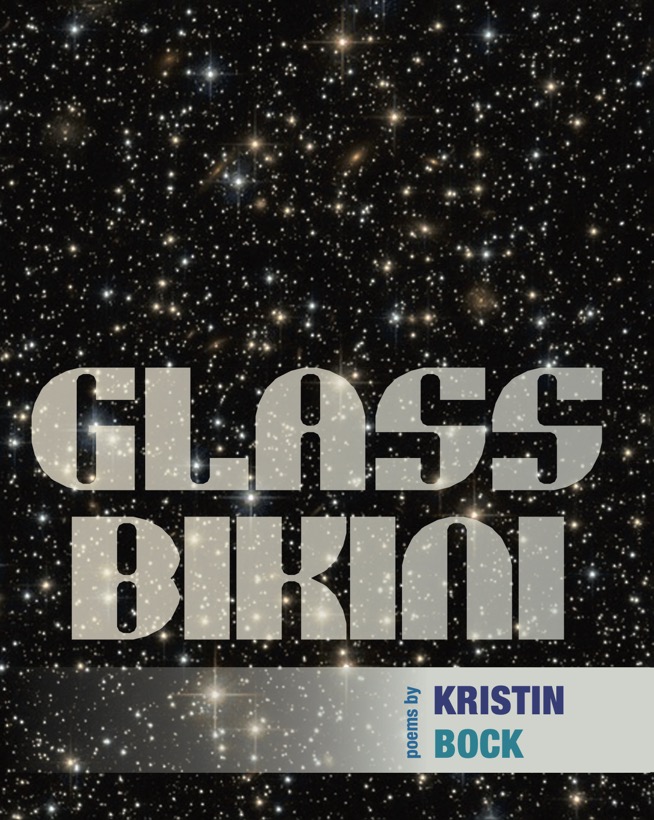 There is a world where art has become extinct. In this place, we search aimlessly for some sense of wonder, losing ourselves in the chaos we create. In this absence of art, perhaps we create monsters to fill the void, to at least feel some bit of emotion from the hordes of creatures scratching and clawing at the empty spaces left over. This is the world of Glass Bikini, a new poetry collection by Kristin Bock that brings a premonition of the future through prose poems that craft a world filled with bouquets of rifles, rabbits taking over the world, and monsters with soldiers pouring from them.

In Bock’s alternate universe, the reader is immersed in a carnival ride that questions and interprets how our current reality could easily follow a much darker timeline. In this world of monsters and chaos, happening “after the extinction of whales”, in which trees as nourishers become murderous “flame trees”, the reader is instantly and viscerally reminded of the fires that have ravaged Australia, the Amazon, and much of the western United States. And where fire once may have signaled a renewal of forests and the promise of rebirth, the reader is now trapped in a purgatory of flame and destruction brought about by ignorance and indifference. Throughout the book, Bock weaves the narrative as a poetic comparison of our reality through a desolate and detached, voyeuristic observer as the reader is left to piece together a clarity and identity while surrounded by a dystopic tempest. In Bock’s world, it is The Poet that speaks Truth, which resides in a cascade of words that thrust the reader directly into the chaotic despair of a world on fire, the awe of monstrous intentions, and the dystopic visions that exist in our everyday lives.

However, Bock’s work is not a simple metaphor that one can easily identify and say ‘Ah yes, this is our future. Let us be sad.’ Rather, like our actual world, the Truth is much more ephemeral and everything that takes place is often beyond our grasp. This is especially resonant in how Bock evokes the crucified feminine that society has sought for millennia to control, while invoking questions about a broader responsibility to a suffering earth. In these moments, Bock brings the best poetic intentionality through an invitation to the true monsters of the world; an invitation to come and find a place in the nothing that is left, with the Poet more than suggesting these monsters may fit in just fine in the world we are creating:

Throughout the work, these themes emerge time and again, with The Poet providing commentary on the destruction of the planet while intertwining the commentary with our world’s underlying hatred for the feminine. Each poem builds and each subject suggests the next, leading the reader down a path of exploration of fear, confusion and destruction, as well as growth and understanding. This work is both an interpretation of our future and also our present where the distorted lens of a vague storybook character lies in the president’s choke hold, trying to “tap out, but the refs don’t see her.” She writes, “The entire stadium can’t breathe! We’re all down here in a hole, nibbling on opposite sides of a magic rabbit.”

Bock suggests we will “die in a bed of your own making” giving us a dire warning but also a fantastical place where none of this is actually real and we still have time to make sense of these empty spaces before the monsters truly emerge. Perhaps, the Poet seems to imply, there is still time to revive the artistic self, the sense of wonder, and make things right.

By the end of the work, is it clear the Poet speaks more than a universal Truth. Rather,  they are a guide to help us on a journey of poetic exploration. As readers, we can jump in and try to figure out some of the greater questions before it’s too late.

Or maybe none of this exploration is anything but a vague reflection of an extinction-level event and at the end there was “only a girl who turned into a bird and flew next to you for a time.”