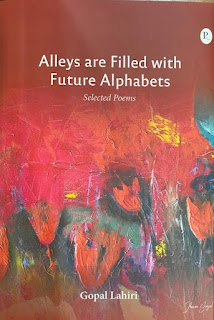 This is a brilliant collection of 110 poems which take us on a meaningful journey as if on a spacecraft, where we sometimes get a rollercoaster ride of negotiating the past with the present, sometimes on a straight ride through scudding clouds where cogitations on the transitory struggle with meditations on the everlasting, sometimes there is a pining for the worldly charms negated by the search for the unknown, the summum bonum. The poems in this volume have already been published in different journals of repute almost all over the world, namely, Ink Sweat and Tears, Piker Press, Harbinger Asylum, Whisper, Spillwords, Glomag, Fasihi Magazine, Café Dissensus, Coldnoon Diaries, so on , so forth. This book has a Preamble by poet Sharmila Ray, a Postface by Prof. John Thieme, and a cover art by Prof. Jharna Sanyal. Blurb has also been written by Michael Minassian and Sanjeev Sethi.

The book has been divided into seven sections with not less than eight poems in each. The first section, “Voyages In” makes us take an inward look where we get to listen to the musings of the soul. Perhaps, this inward journey sometimes makes us see with tears in our eyes how “ slowly a poem dies in my secret diary page”[First Birth], sometimes again, the alter ego hides behind the refracted light, silenced sound, dying whisper, or elongating shadows to be spotted at last, “ You are here but far beyond/real and more real”[ The Other I], or again some other times, in an absolute search in one’s own self it is discovered that, “my inside burns for reasons that are unclear,/ Feeling impassable cold hard reality/day in and day out with too many/empty holes and half-filled holes, in my promises.”[Summer of Discontent], sometimes, a promise of undying love[I Still Love] or sometimes the pitter-patter of a shower seems to “weave love and light”[Raindrops], an existential conviction jars us to a reality in which the poet blurts forth, “ I always imagine I am here by accident”.[ Displaced]

In the next section, “Voyages Out”, there is reaching out to a wider world, peering into different slices of existence. A few lines from one or two poems of this section will definitely make this observation clear:

between towns and villages,

their unwashed faces carry the blackness of life.

mix with rain dirt and mound, rough as gravel,

weave a mist of conflict and loss…

Our wars, our lies, our needless aggressions

are drunk with faith and credence,

I will never live in that world that carries

blood stains and bullet holes under the sleeves

child on the chest and listen to mother’s song

that drifts her towards the rest.

…I want to have the only thing that counts; freedom

The section “Cityscape Silhouettes” focuses on different faces of the city Kolkata in India, where the poet belongs and for whom the city “remains a muse” forever. Kolkata Scene 1, Scene 2, Scene 3 hold up different moods of the protean moods of this some-three-hundred years old city:

Butterflies in Maidan align with the crease of the petals

each word stations between hope and surrender.

The evening ushers in mystery and suspense

Strings of jasmine welcome you to the earthly paradise.

Seasons will not be one of smoke and dust in lockdown,

The final poem of this Section sums up Lahiri’s euphoria regarding Kolkata, the city which unfailingly will remain to be his Muse:

Under the shade of sodium vapour lamps,

Bodies morph from poor to rich, living to dead,

the rush of blue lights distils on the discoloured skin

of the mannequins; the city scrawls and scratches

on the marbles of the palace and cenotaph.

The poems from the section, “Macrocosm”, which immediately win our attention are, “Fall Furioso”[reminding one of “Orlando Furioso”], “Warmth” and “Secret Learning”:

from its weary branch

the sunbird is in search of nectar

clouds assemble to greet the antelopes,

may there be a river beneath my words

all I need is mother’s warmth inside. [Warmth]

Silence spilling all around, the sky holds still

The pureness of blue, the softness of light.

The low and high notes of the morning chanting

“Haiku Series and Micro Poems” have quite a few brilliant haikus as well as short poems.

Much explorations in the inner recesses go on. Many questions on existence assail the poet. Subsequent sections like “ Travel Diaries”, “ Pandemic and Resilience” put forth umpteen misgivings followed by certain solutions even. Scenes of virus-attack and its aftermath are gruesome but the optimistic message somehow alleviates the grief, the loss, the unseen yet colossal presence of the pathogen. “this is joy of transformation; a pure spontaneity” [ Alchemy of Anguish] makes us live with a new hope. “ New Normal and I” the poet dreams of a “new world” he awaits.“ Sunderbans” and “ Nuwora Eliya” deserve special mention in “Travel Diaries”

This collection is a brilliant one and we hope the next edition must follow soon. But let it come out free of printer’s devil, that has crept into this edition much to the chagrin or utter dismay of the poet himself. A couple of them met my eye:

However, the appeal of the poems is irresistible. Let it be there on a poetry-lover’s collection

← A Q&A with Mike Mattison and Ernest Suarez
A review of Henceforth I Ask Not Good Fortune by Dotty E. LeMieux →