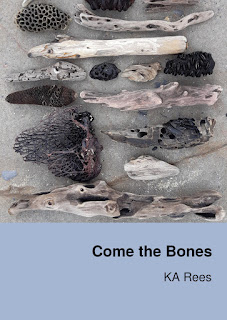 KA Rees’ poetry has a quiet assurance that effortlessly gets under the skin. Her debut collection, Come the Bones, is full of surprise moments – of found pleasure and revealed loss. Though Flying Island pocket books are delightfully portable and collectably small, this is not a small book in content. The forty-five poems often span several pages and are condensed and rich.  The collection is the perfect combination of intensely intimate and universal, with deep observation that is sometimes so close that the everyday familiar becomes abstract. It feels at times like Rees is taking you along with her, on a physical journey, walking along a “ticking shoreline”, on a car ride, a walk through the city, a trip back to ancestral homes, a walk around the charred remains of a burnt down house, or through pain, as in the stunning Judith Wright shortlisted poem “Thin Veil”, which opens with the vernacular: “—Where’s the bloody panadol?” and proceeds through a common landscape that has become defamiliarised, through tragedy, “three dead.   A shoal of gravel came to rest”, the weight of the dead becoming visceral: “your arm will go numb”, and through the physical pain of a migraine or depression: “A glass of water, the pills and down.”   The poem creates a tension that reminds us how thin the veil between life and death, between happiness and its opposite, and between control and chaos.

Throughout Come the Bones, the writing is so silently observant, that the intensity comes as a shock, like being in a warm bath that slowly gets hotter, as in the poem “Bone / fire” which uses text blocks to tell a story of tragedy and transformation that is both beautiful and deeply destabilising:

If parcels of air were to have a colour, they would be this blue. Her now: You can no longer taste the air. She threw them skyward where darting swallows scooped small insects. And slowly, she turned the colour of clouds.

The book has an eco-poetic quality, immersed in nature which is both subject and object – not as something ‘other’ but as an inherent part of the same life. The ocean where the “sea mist rolls/and the tide folds in” is  a critical part of this book, but other habitats too—the forest with its spiders and caterpillars or the city streets with cockatoos and miscreants.  From a raindrop to the universe, the work moves through the micro to the macro and as it becomes clear that these are part of a single, unified system:

The passenger watches pictures of storms, magnetic fields, data points for cosmic radiation; images of the moons, a dirty grey snow spilling across the screen.  Sees the most distant thing humans ever made, this message board cost into space:

This, from a small distant world.

We are attempting to survive

Our time so that we may live into yours. (The Expanding Universe)

Other poems also use white space in innovative ways – not as concrete poems, but as a way of allowing in breath, swing, and rhythm as words spread across the page, come to us as parenthetic asides, or encompass a rhythm that is charged by innate music:

your lungs and the music is salt

There’s a beautiful balance between observation and action, between contemplation and political engagement, and between the intellectual and visceral.  A poem that demonstrates this balance perfectly is the Joanne burns Microlit Competition winner “no white m&ms” which is rendered in a prosaic block of text which poses a series of answers to an unspoken question. The work begins innocuously, focusing on its subject: “How the colour from m&ms stains your fingers before you get to the centre” and moves through a series of images that tracks the impact of physical ageing, global warming, the dark and racist history of Rottnest Island prison camp and the way we trivialise it, the origins of civilisation and much more, belying its own simplicity:

How buildings tower into the sky like solidly built things, but how a brick fits solidly into a hand, how bricks once came from sand. How there are no white m&ms only ones sucked of any colour.

At every turn in this collection there is something shimmering – a raindrop, a piece of recovered pottery amidst charred remains, a sunset or mackerel sky, the ocean breaking against the shore, or the light quivering off molten glass in a city window. Come the Bones presents a way of perceiving the world that is laser-focused, and both terrifying — because it highlights how much we have to lose, and simply gorgeous.

← The Hubris Of An Empty Hand by Mahyar A. Amouzegar
A review of Planetary Motions by William Seaton →