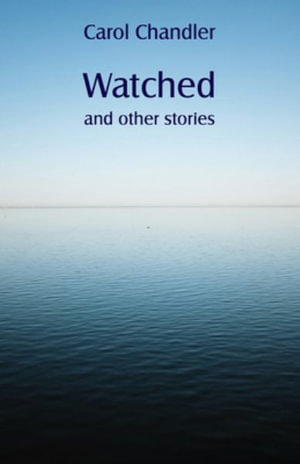 Watched and other stories by Carol Chandler, as the title alerts us contains four short stories, one of considerable length and three shorter ones. Chandler is an accomplished writer with many awards to her name, her short stories have been published in literary magazines and journals.

Each story is a slice of life where the reader enters places and into the mind of the characters. The characters are well developed, intriguing and mysterious, some live at the margin and others think at the margin. The plots are neat and compact with good time and pacing demonstrating the skills of the writer.

The first story in the book is “Watched”.  We find out through a third person narrator about Mick, the main character, and we see his life through his point of view. Mick has just come out of jail and goes back to where his previous life took place. He relates to many other interesting characters, all of them very real and true to life.  The author is very skilled in writing dialogues and interjecting these with the main character’s thoughts, here is an example:

Yasmin looked a little flushed as if she’d been drinking and he noticed a wine glass nearby.

‘I remember when you were last here, Mick’, said Yasmin.

He could tell she was aware of what was happening between him and Angela and didn’t like it. Her voice was a little tense.

‘You said you were looking for work.  How long were you away?’

He glanced around, realising this was code for ‘how long were you inside?’

The euphemism irritated him.  Molly had left the room and was in the bedroom.

Her bright-eye enthusiasm annoyed him, the slight sing-song tone in her voice. Angela was smiling as if she knew it too.

‘Yeah, I don’t like talking about the past,’ he said, picking up Angela’s amused expression. (17)

The descriptions in this fascinating book are very vivid, these have cinematic power and are in a very precise language, the following paragraph is a good example from page 37:

As he walked outside, looking for Roland, he noticed the pool.  Bending down towards a leaf, he felt hemmed in again as he watched it float, suspended on the water.  Poinsettia petals streaked the ground, blood-red in the moonlight.  He stared down at them.  The water was slightly murky, but at the same time shining in the light, beams flickering across the surface.

The story “Watched” will bring to the readers mind a very important philosophical and ethical issue: do you have the right to obtain justice by our own hand?  In another words, does the end justify the end? I can assure the readers that “Watched” will leave you pondering.

“The Dark Wood” is a somber story about Heather, a woman overcome by guilt and seeking penance. She has done something wrong and she is not forgiving herself.  Chandler skilfully sets the scenes and creates a very palpable atmosphere as well as a true to life character. The story is told by a Heather. Here is a short paragraph to wet your literary appetite:

A shred of curtain brushed the glass and timber had fallen off near the fireplace.  It was morning now.  I put paper and wood in the fireplace to create a fire, mauve hydrangeas outside. Some people say mauve is a sad colour, fading like the twilight but I don’t agree.

The were purple vincus plants outside nestled like fallen crosses in thickets of leaves.  I walked out and began clearing them away, the continual need to do penance.  Cutting away thick stems like twisted rope. I scratched my hands. (73)

“Travelling Through the Fog of Night” is the third story in Watched, a young woman observes her world around her. She is angry and unhappy, she wants a better life. Through her eyes we see poverty and learn about the people she relates too.  The following paragraph clearly gives an insight into her feelings:

I left the house feeling angry, and climbed over some more fences through people’s backyards. Then I walked back home, still feeling angry, wondering why no one ever did anything.  I was conscious that everything was in disrepair at our place, wall hangings, old couches and a ratty dog.  Mum had been talking about moving for some time. (78)

The last story in the book is “The Keeper of the Light”, like in all the other stories Chandler excels in her skills as a short story writer. She has the ability to grab the reader’s attention and into the characters mind and world. Polly is the main character in this story, she ponders as she deals with her relationship with her family: grandmother, mother and sister and confronts issues very common in families.

Again, here Chandler is able to bring characters and their environment to life and awaken emotions in the reader. The following is an example of Polly’s musings:

The humidity was intense and when I walked outside in the evening, a myriad of stars shone in the sky, silence, a car whizzing past, a heavy feeling around the mountain.  Julie said there was a fire last season.  They could see flames in the darkness like a volcano, a dotted trail of light leading to the summit, jets of fire. There was a sense of escape, a wild beginning.

When I reached the path at the top of the garden that led to the beach, Sandy’s teacups were sitting precariously on the grass.  I picked them up and rearranged them.  Sandy was the one I spoke to the most, not the others.  I hardly spoke to dad.  In fact, I never saw him and when I did, I hardly said anything.” (Page 90)

Watched by Carol Chandler will bring to the reader a rich world of images, interesting characters and relationships all adorned with fascinating stories.

About the reviewer: Dr Beatriz Copello is a former member of NSW Writers Centre Management Committee, writes poetry, reviews, fiction and plays. The authors poetry books are: Women Souls and Shadows, Meditations At the Edge of a Dream, Under the Gums Long Shade, and Lo Irrevocable del Halcon (In Spanish), fiction books are A Call to the Star and Forbidden Steps Under the Wisteria. Copello’s poetry has been published in literary journals such as Southerly and Australian Women’s Book Review and in many feminist publications.  She has read her poetry at events organised by the Sydney Writers Festival, the NSW Writers Centre, the Multicultural Arts Alliance, Refugee Week Committee, Humboldt University (USA), Ubud (Bali) Writers Festival.

← A review of We’re Doomed! by Scott Erickson
The Hubris Of An Empty Hand by Mahyar A. Amouzegar →