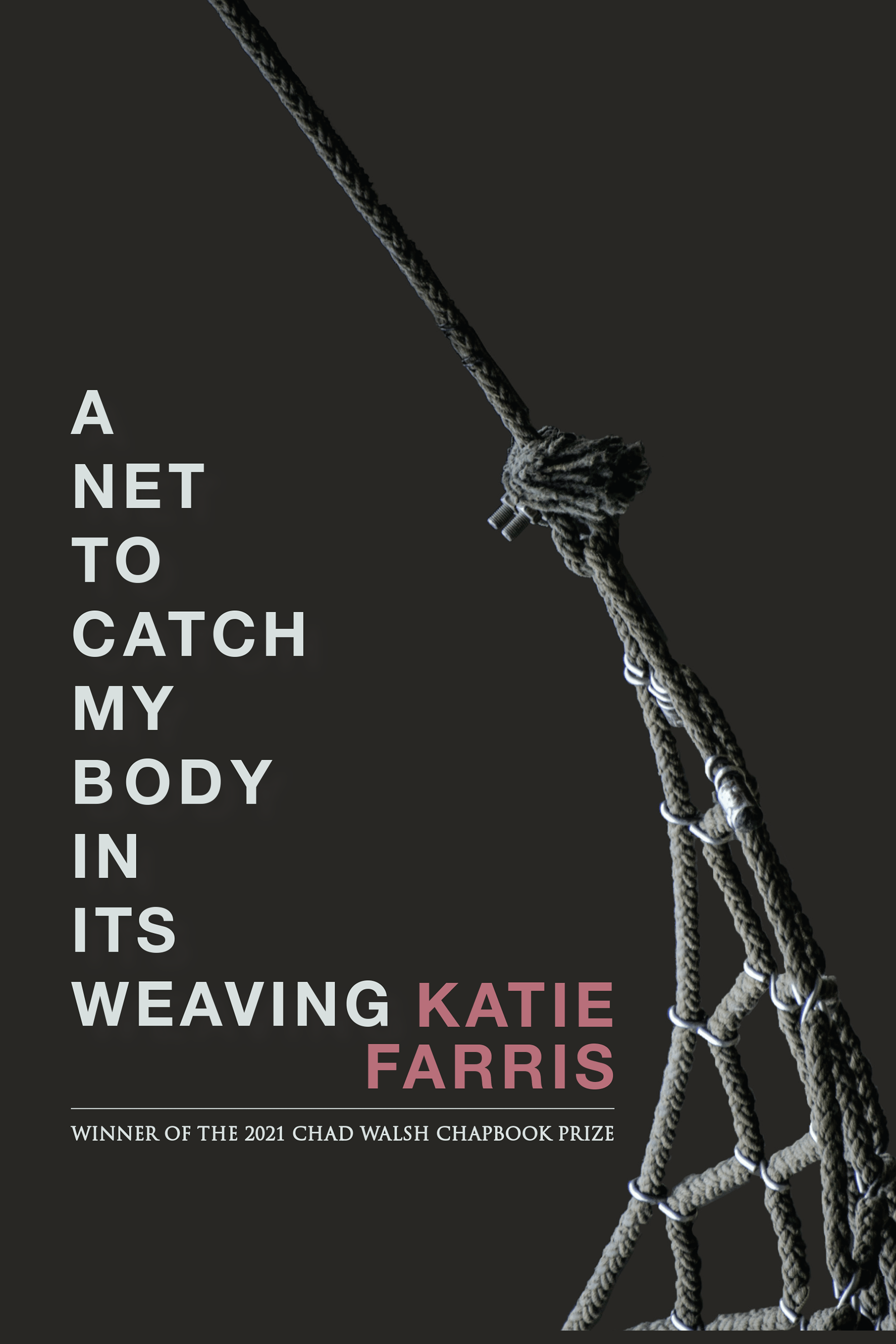 In writing A Net to Catch My Body in Its Weaving, Katie Farris has crafted a gem of a chapbook about her breast cancer with poems pithy and poignant, wry and romantic, gut wrenching and beautiful. These poems hold the heart as well as sear us with splendid syntax.

No need to wonder if these poems are personal. Farris has chronicled some of her ongoing breast cancer story on Twitter. Check out her long red hair in a prior webpage photo. Contrast it with the photo on the back of this chapbook, her face and bald head partially covered by a mask verily shouts “chemo” to the reader. This whimsical author photo suggests that the speaker of the poems faces challenges with honesty and humor. Farris’s poem “After the Mastectomy,” asks:

I am well-positioned to seek out
fires and invading hoards–my bald head
the beacon
which spreads
the first
alarm.

Farris both hides behind a mask and doesn’t. As any poetry creates a mask that both conceals and reveals, she gives readers poetic glimpses behind her mask with tight, lyrical lines. Farris controls the lens that we will look through to get to know her poetry and her personal medical journey. She gives readers an opportunity to see but not dwell upon the upheaval thrust on her life by interactions with medical staff, her husband, and the public.

Many of us can imagine facing a possible death sentence but few of us are diagnosed with breast cancer in early adulthood. These poems explode in raw, expressive pain so skilled that they are neither maudlin nor sentimental. Rather, they are self-revelatory of personal pain and health challenges as in Frida Kahlo’s paintings. They are filled with Emily Dickinson’s signature em dashes to suggest delight as well as pain rather than any plaintive cry of self-pity.

There are no sections. Cancer is disjointed enough as the poet’s doctors try to channel cancer and transform it within a river of persistent healing. The chapbook moves through poems that weave a linear and emotional trajectory.

This chapbook, which won a place in the Chad Walsh Chapbook series from Beloit Poetry Journal, grabs the reader with the first poem, “Why Write Love Poetry in a Burning World.” It announces the speaker’s cancer and presents an answer, “To train myself, in the midst of a burning world, / to offer poems of love in a burning world.” Such a response comes from a writer who will not let her writing be subjugated by turmoil that upends her world. That is the seed of an idea that Farris plants in this first poem:

The body, bald, cancerous, but still
beautiful enough to
imagine living the body
washing the body
replacing a loose front
porch step the body chewing
what it takes to keep a body
going–

These poems are direct and deft. In “Tell it Slant,” the speaker modifies the impact of the diagnosis by naming her cancer “cactus.” Use of medical terminology also tweaks the impact of the words. The title of this poem alludes to Emily Dickinson’s directive to put a spin on the truth, perhaps to make it more palatable. There are three poems with titles that directly refer to the mother of modern American poetry.

Farris writes many shortish poems using punctuation that clarifies how to read them. There are commas, question marks, exclamation marks, colons, semicolons, periods, ellipses, and, continuing the references to Dickinson, em dashes in most every poem.

Poems within this chapbook resonate with and echo one another. For example, Farris writes of hair in four poems. In the third poem, “On the Morning of the Port Surgery,” the speaker will “surrender / my braid.” The final poem, “What Would Root” specifically mentions the speaker’s red hair and regrowth. One imagines that Farris is making a slanted reference to healing, with regrowth becoming metaphor for possible long-term health.

In “Outside Atlanta Cancer Care,” the word “tree” becomes metaphor for a “point of wonder” and “vertical absurdity” as we humans imitate trees, “lifting our arms, / wishing for roots.” This poet signals hope with “if you long hard enough, / do you not find fruit / in your palms?” The connections that Farris weaves among poems are subtle and satisfying.

Farris speaks in metaphor and offers philosophy. In the following poem, “In the Event of My Death” she speaks of the quotidian act of cutting her spouse’s unruly hair and then makes a request that he bury her hair braid that was cut off prior to chemo. The lost hair becomes a rope that could ease her possible descent as well as it signals the title of the book:

I will need a rope
to let me down into the earth.
I’ve hidden others
strategically around the globe,
a net to catch
my body in its weaving.

With bits of homage, Farris refers to works of Blake, Frost, Whitman, and cummings, besides paying stylistic tribute to Dickinson. The poet references the fun of arguing poetry with her partner as she refers to Giotto’s angels. Her body becomes varied sculptures in an art gallery her husband visits in “I Wake to Find You Wandering the Museum of My Body.” The poem begins, “Twenty-four Greek urns / Painted with wrestling boys / Comprise my spine.” Artworks are invoked by spine, ribs, feet, bald head, and organs. The poem delights with subtle assonance and slant rhyme.

Living in partnership with others is preferable when undergoing cancer treatment. Sad and beautiful poems by Farris reach out to the reader. In “Marriage, an Exercise,” Farris points out how marriage can be “an exercise / in watching another / lose.” Her poems hit home with poignant honesty.

These poems pull no punches yet impel us toward compassion. Farris offers wry (raw) humor as well as emotional need. How else to describe “An Unexpected Turn of Events Midway through Chemotherapy:”

Philosexical, soft and
Gentle, a real
Straight fucking, rhymed
Or metrical–whatever
You’ve got, I’ll take it.
Just so long as we’re naked.

The more closely one reads this collection, the more craft of manuscript compilation stands out. Images of trees resonate again near the end of the chapbook in “Standing in the Forest of Being Alive.” This title implies gratitude even though the speaker imagines becoming lost when “walking through / a cemetery.” With simple mentions of “bird” and “sepulcher,” Farris again calls Dickinson to mind. The speaker is looking for her own grave in the cemetery where “Madness hung out over the gravel paths, / swaying like laundry.” How’s that for a humorous quotidian simile in the midst of pathos! Farris delivers irony and adds her own spin with “Some of us are still putzes / in death, catching birdshit on our headstones.” One of the masks, mentioned earlier, is the veiled rage of the speaker.

The speaker refers to both herself and her spouse as puppets in two poems as they grapple with her health crisis. In “Marriage, an Exercise,” she describes her husband as puppet to his emotional pain. She alludes to such involved bystanders becoming “now empty / as a sock.” Think sock puppets. The speaker then refers to her own lack of control in the poem “When You Walk Over the Earth:”

Here,” it says to your
feet. You must reckon
with the earth, though it enters
you less (unless…). The sky always
has its hand in you,
as if you were a puppet,
through your ears down
your throat into your
lungs–

Fear is an undercurrent throughout the chapbook. In “Scheduling the Bone Scan” noise suggests apprehension as “The drum in your ear moves the hammer / like a lever.” When the speaker in “Woman with Amputated Breast Returns for Her Injection,” she feels challenged to be the perfect patient for the doctors:

Yes, this poet does mention the feared word, “death,” several times, including in the gorgeous imagistic poem right before the end of the collection that refers to Robert Frost’s poem “Fire and Ice.” In “Ice for Me.” Farris ends, “I’ll walk willingly between / the curtains of trees.”

The final poem. “What Would Root,” is longer than the other poems, doesn’t mention death, and returns to a green forest of trees. The speaker wishes for seeds then pleasantly discovers she has become root. Having found new growth, she declares her intent to “nuzzle the earth, to drink.” She:

sat down feeling the hairs on the back of my neck
understanding for the first time they were not hairs, but roots.
Everything; it was all green; the twigs in my eyes
tasted sunlight with my mouth; the roots drew the salt
from my sweat into their vacuum, and I was no longer hungry:

With her new collection, Katie Farris explores a challenging time in her life with honesty and lyric beauty. She has crafted a net of poetry to support readers who find themselves swimming in waters of ill health. Readers will cherish her words and want to share them with others.